I don't think I warmed up from the ice bath until about 2:00 AM Thursday morning in bed. Fortunately for me, when it was time to wake up, I felt about 85%. My back was still hurting (ice water doesn't help vertebrae pressing onto nerves) but my legs and knees felt great. Today was the game against the alumni, and it was purposely scheduled on Thursday to give us all a break from two days in a row of two games apiece.

I ate breakfast with a couple of campers and a guy wearing a credential for something called "NFL" who was in town for some football game that was going to be played in town the next weekend. I think it was called XLIX or something. He said that by the time he was done, he would have spent about 40 days in Phoenix working on all aspects of putting it on. Cool story, bro. Now, back to baseball.

I stopped by the trainers' room to check in, but with today's lighter schedule and my lack of pain, they had plenty of patients with worse problems. Also of note, Buddy Black had a prior arrangement and had left camp Wednesday night. But first, another day of camp meant another docket of...

I made the mistake of writing about Day 3 without a thorough review of the video coverage, so I will mix in some cases from Wednesday that I should have mentioned in that post.

Sunny (Jim Sundberg) brought up an Asian-American guy on his team who might have been the only one younger than me at camp. He called him "Sin Shoo Choo" in the summons. During a game, one of his teammates had wondered out loud what country he was from. Sunny asked him, and the guy replied "California". $2 for claiming California as a country. But Sunny wasn't done: "And then, I fined myself $2, because, yeah, it pretty much is its own country!"

Sunny got me for $2 for "false hustle". As a designated runner in a game against his team, I had taken off on a pop foul that ended up going behind the screen, and I kept running until Sheridan (and Sunny, who was standing by the coach's box) told me to turn around. I chose not to appeal, but I have two points in my defense. First, as I mentioned in Day 1, I hadn't played baseball since I was 10 years old, and at that age your coaches tell you to run everything out. Second, I have played softball as an adult, but I don't wear a helmet, and if you pop up on the infield, it can be a little disconcerting not knowing for certain that the ball won't drop on your head, so you try to put as much distance between you and where you think the ball is going to land. Those two thoughts contributed to my "false hustle".

Sunny also got a guy on another team for $2 for asking where the restrooms were near the fields because he "had to go pee-pee". When the guy mentioned that he was a pediatrician, Sunny upped the fine to $5.

The Royals' side of the Surprise complex has a parking lot that's right next to the clubhouse for players, front office employees, and for a week, us campers. It's guarded by an electronic gate that we had been given the code for, or at least, most of us had. Sabes brought up Pryor and Sheridan for being in a van and waiting at the gate for an hour on Tuesday morning because they didn't know the code. Once again, Pryor asked "What's the charge?" "Being dumb!" shot back Sabes. During this exchange, someone's phone went off with an interesting ringtone. George cut in. "Anybody just hear Woody Woodpecker? Twice? [guy on our team], is that your f***in' phone? $5 per ring, two rings, so $10." Always silence your phone for kangaroo court.

Sunny brought up lots of guys on charges, another guy was fined $2 for kissing his wife on the field.

Buddy Biancalana fined the catcher on his own team $2 for handing the ball to the umpire for the umpire to throw back to the pitcher, rather than throwing it back himself. He then requested that the same guy be given a $2 credit for being 68 years old and catching all 7 innings of that game, effectively negating the fine.

With the end of court, it was time to head to the stadium. Our other games had been played on the "practice" fields of the complex; the alumni game took place inside the stadium itself. The games would be three innings apiece; each team would keep its alumni coaches but play against the others. Three games would take place in the morning, with the other 3 in the afternoon. Ours was the last of the day, so we had all morning and most of the afternoon to relax. 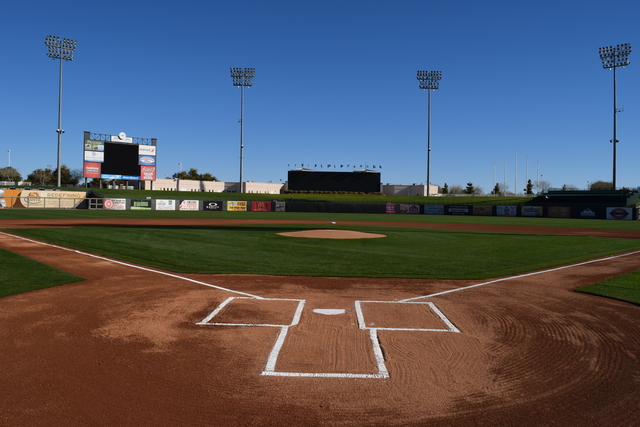 This day was quite a bit cooler than the previous ones, no warmer than 60. Sitting in the sun was a necessity, as the shade was just too chilly. In the morning, this meant watching from the 3rd base side, the alumni dugout. 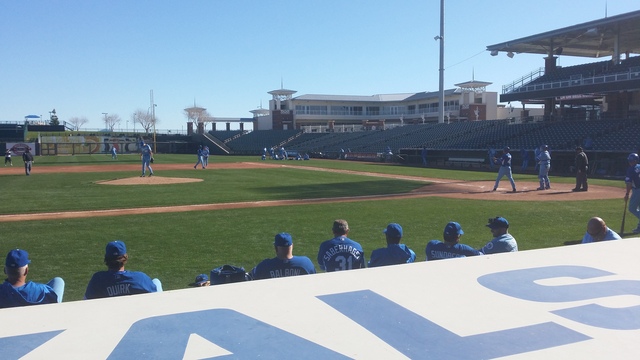 As I recall, Brett and McRae didn't play due to health issues. Sabes, Gubie and Monty had issues that prevented them from pitching but not playing. Charlie Liebrandt pitched the morning games. For the alumni games, the entire camper team would play in the field, which usually meant a 5 man outfield and a 5 man infield, plus the battery. Also, every camper was guaranteed a plate appearance. These games were meant to be fun and inclusive (although most were flat-out drubbings), and would not count in the camp's tournament standings.

Someone used the stadium sound system to announce the start of the games: "We would like to welcome you to today's games featuring the 1985 World Champion Kansas City Royals!...as they take on some campers."

I didn't take detailed notes about the results of the games; only that the alumni did suffer one tie game (I think it was the second). Fortunately, George had some notes that he shared during lunch, in the form of an MVP "trophy" for Charlie: 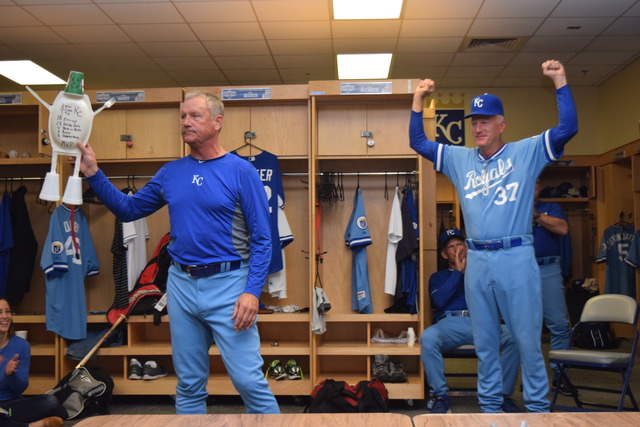 After lunch, a couple of teammates and I decided to hit the cages for some batting practice during the early afternoon games. The cages are clear on the other end of the complex, so we had to carry the bucket of balls all the way out there and back when we were done. There are another set of cages right by the stadium, and they might even have had machines in them, but we were told to stay away from them, as some of the current players were using them throughout the week.

By now, the sun was basically behind the stadium. The field was still sunny, but sunny (and warm) seats were hard to find, much to my wife's chagrin. Our dugout was in full shade, so waiting to bat was chilly as well. 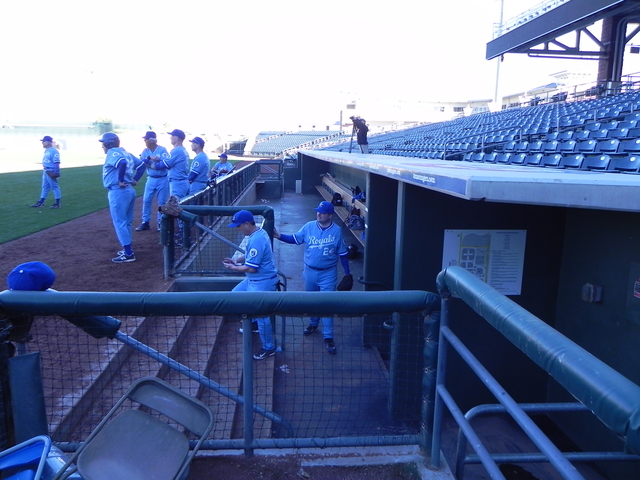 I mostly played right field this game, and made my first error of camp: 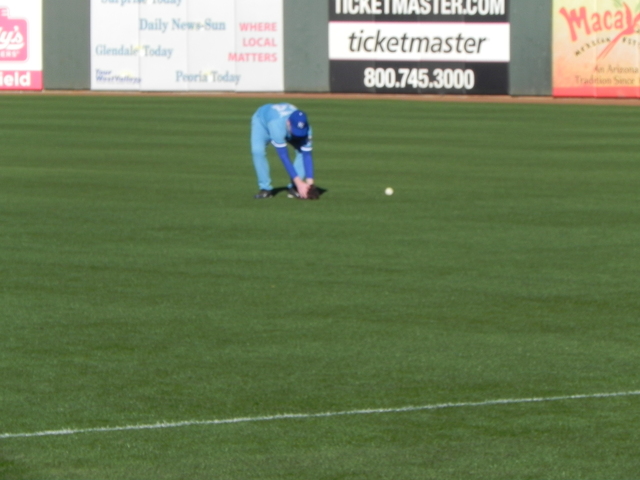 In the middle of the 2nd inning, our pitcher decided to yield to whomever wanted to throw a couple. I'd always wanted to pitch, so I jumped on the opportunity. As I mentioned in Day 1, I felt most comfortable with a 2 seam grip. I've never deliberately thrown a curveball or a slider in my life. When I was young, my dad refused to teach me how to throw them as he feels they are too dangerous for young, growing arms. He would speak disapprovingly about seeing other kids in my league trying to throw them; if it were up to him, throwing a single breaking pitch would eat up half of one's allowed pitches for the day. Today was not the day I was going to experiment (throwing off of the mound was different enough), so I just stuck with the 2 seamer. 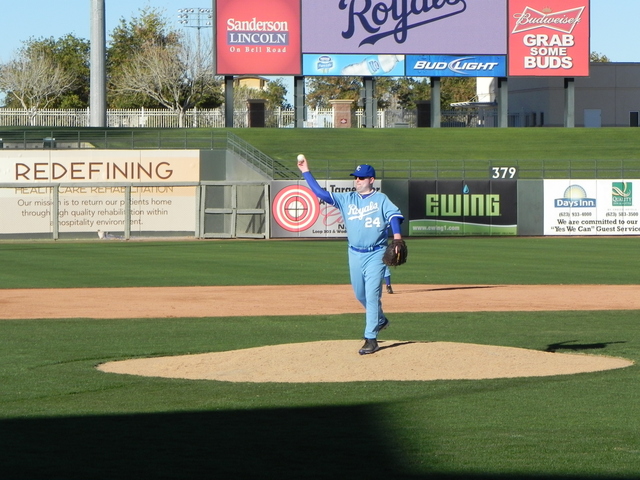 Next batter up was Buddy Biancalana. He singled through the right side. After him was Sabes. Sabes smashed a comebacker that came within 6 inches of destroying my left foot. My wife and dad in the stands both thought that I had actually been hit, and were puzzled as to how I was walking around (on my dad's GoPro video you can hear him say "hey, that's my son!" to Sabes). They were on to my one pitch, so I chose to yield the mound to another guy. But I got a (former) Major Leaguer out. As I ultimately went 0*-fer camp, getting Motley out is probably my capstone memory of the week.

Dennis Leonard was the alumni pitcher for the afternoon games. He dispatched us pretty efficiently; I figure he was throwing around 75 or 80. I had brought my own bats to camp, but unfortunately, Leo dispatched my gamer as well with an inside heater that I fouled back: 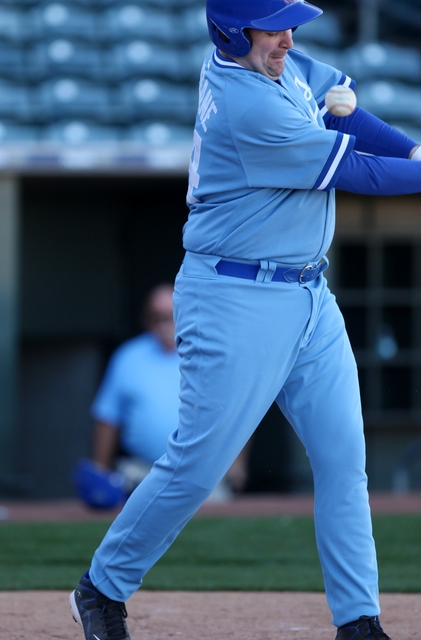 This bat did not die a hero

I had figured the bat would get broken at some point. All ash bats delaminate over their lifetime and will eventually split; hitting a fastball near the handle accelerates this process pretty rapidly. I walked back to the dugout to get a new piece of lumber, and quickly grounded out to the right side. I don't remember if it was 3-unassisted or 4-3. 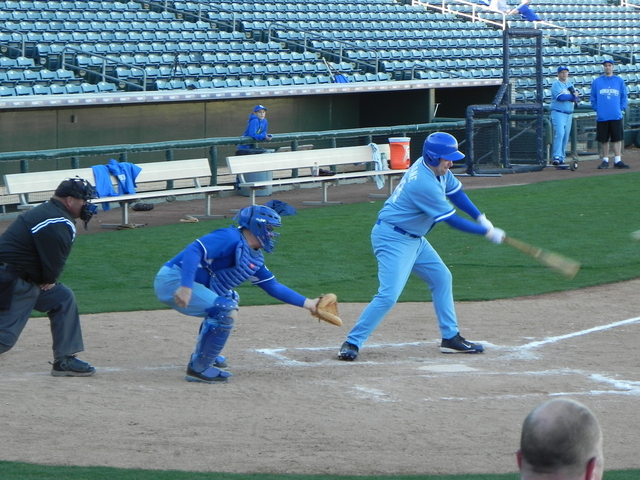 Not surprisingly, we lost this game. Afterwards, we took the photo at the top of the post.

In the clubhouse, after he was done icing his shoulder, I got Leo to autograph my now ex-bat: 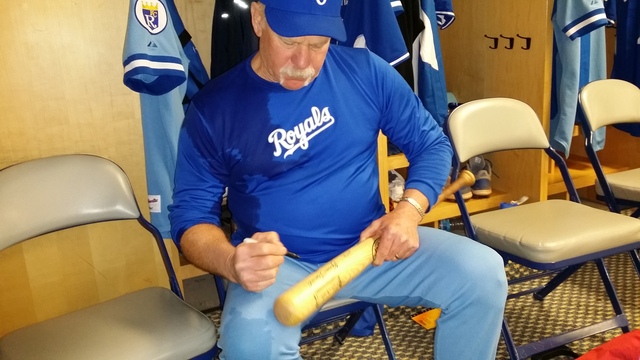 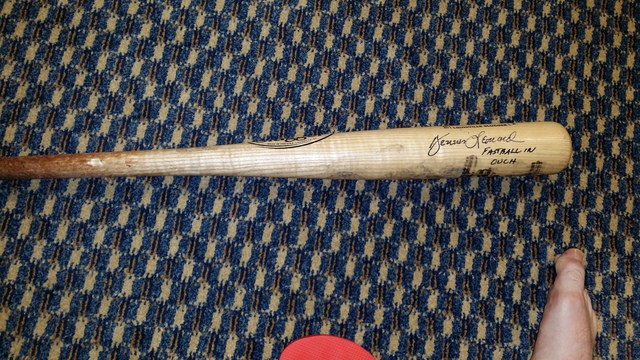 On the left side of the bat you can see a lighter-colored chip where the crack formed.

Dinner this night was on our own. My entourage and I went to a gastropub in downtown Phoenix to eat, and then had a couple of drinks at the rotating Compass Arizona Grill.

Next up, my last day of camp, where Big John tries to get thrown out of a game and we consider starting the Royals chant outside the Racists' Indians' fantasy camp banquet.