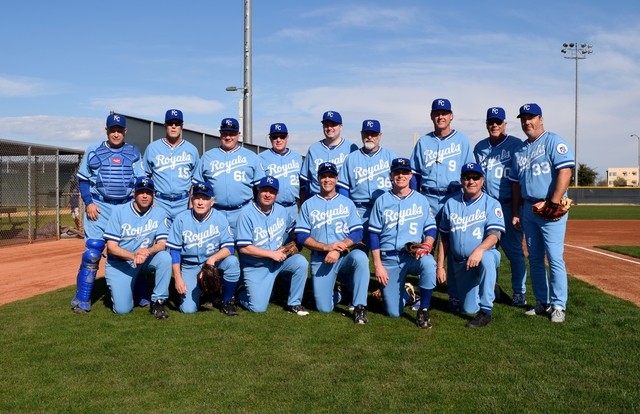 Waking up on time is much easier when you're west of home. Breakfast and van service to the stadium started about 7 AM. I tend to not remember much in the early mornings, probably due to a lack of coffee. I do remember bending my injured knee and, while it was a little bit stiff, it didn't hurt much at all except on direct pressure.

I don't even remember who drove my van. I tended to climb as far back as I could as a service to the older (and, as the week went on, increasingly infirm) campers. I do remember seeing fields of cotton being grown out in the desert. This choice doesn't make sense to me, but that's probably because it makes dollars for someone more connected than I.

When we got to the stadium I reported as ordered to the training room. The training staff gave me another bag of ice to wear for about 10 minutes, and then put a compression bandage and pad on it. The pad would offer a modicum of protection, but they told me (as if I needed a reminder) not to let it get hit again.

Our uniforms had been laundered the day before and were hanging up. This was the day we would take our photo with the alumni (posted in Day 1), so I put on the royal blue and had that done. We would later receive this as a 20"x30" with each player's autograph on his spot. This day's gift was a World Series hoodie, which turned out to be pretty useful, as Phoenix can still be chilly in January, especially at night.

This day, we had 2 games scheduled, one against Team Black, coached by Hal McRae, Jeff Montgomery, and Mark Gubicza in the morning and the other against Team Red, coached by Steve Balboni, Buddy Biancalana, and Bret Saberhagen in the afternoon.

With only 12-13 guys on each team, and playing abilities hugely varied, some modifications needed to be put in place to ensure a fun environment. First, these would be 7-inning games. Next, there would be no speed-do-ing. Stealing was not allowed, though leadoffs were. Third, there would be a 4 man outfield, much like softball. Next, in striking similarity to the current Royals, walks were optional. "Nobody came to Fantasy Camp to walk". This would be problematic later. We would also run what's called a "continuous lineup", meaning that if you made the last out of one game, whoever would have hit after you would lead off the next game. Finally, the biggest modification was to pitching: campers would pitch for the first three innings. After three, both teams could, on an inning-by-inning basis, agree to continue camper pitch. If either team declined, both teams would begin coach-pitch (your own team's coach), which involved putting the L-shaped batting practice screens at the pitching mound. Hitting a ball into the screen was an automatic single. The coach-pitcher would not field in any way.

Two umpires were provided for each game. I don't remember if they were from the minor league system or if they were high school/college umpires, but they were professionals.

The first thing you'd notice about our team was that both our pitcher and our catcher were over 70 years old. "Judge", our pitcher, was a municipal judge from Emporia, a town in Kansas about 90 minutes southwest of KC on I-35. "Deeds", our catcher, was the second most foul-mouthed guy on the team and hailed from Topeka.

The second thing you'd notice is that many of our guys were from the Lancaster, Pennsylvania area. Their "thing" was to go to a different team's camp every year.

At 33, I was the youngest on our team. The Royals impose a minimum age of 30 for Fantasy Camp, probably to avoid implications of trying to skirt the draft.

In the dugout before our first game, Greg Pryor led the typical baseball icebreaker of "why did you pick your number?". Pryor chose #4 when he was traded from the Pale Hoes to the Royals just before the start of a spring training game between the two teams, as someone told him being #4 meant that he would locker next to George Brett. One guy chose 0 because it was his first camp and he had to prove/earn everything. One of the Pennsylvania guys, whose last name was not Brett, chose 5 and somehow thought that he should have the name Brett on his jersey. This would end up costing him money on Wednesday. I normally would have chosen 42; my alma mater has a cult around the number 42 thanks to its prominence in the Hitchhiker's Guide series. However, I didn't really feel comfortable wearing one of MLB's more sacred numbers, so I reversed it.

I played RF in this game, going 0-2 with a strikeout and a popout to the pitcher. I had been going to the batting cages over the summer, and working on hitting with Charlie Hovey at 68 Inside Sports, but fell out of the routine during the playoffs, partly because standing so much in the stadium started me down a path of back trouble with spondylolisthesis. Getting old sucks. Trying to catch up to actual pitching after you're used to soft toss is tough. I do have in my notes that I fielded a couple of ground balls. I know we pick on Rex quite a bit for the stuff he says, but he is right about defense: if you're having a crappy day at the plate but can make a couple of plays on defense, even if they're routine, even if they only stop a runner from advancing further than he already has, you still feel better about the day. As a kid I thought being in the field was boring, but now I almost like being in the field better. 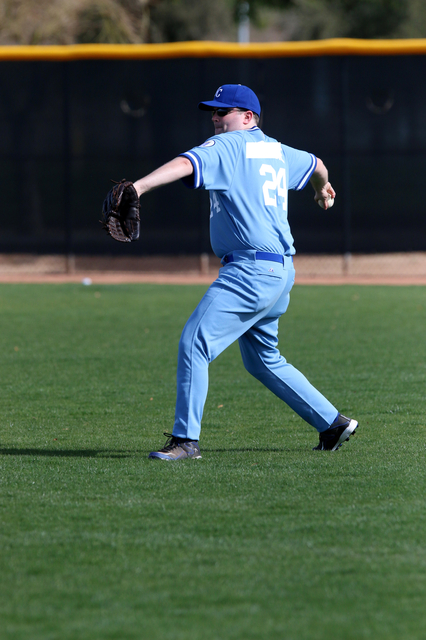 We lost this game 7-2. Our team really struggled to get on base.

Lunch was barbecue from a company called Cookin' on Wood, with tri-tip being the primary meat. Tri-tip is not commonly featured in Kansas City barbecue, as most places limit their beef to brisket. This is unfortunate, as, if done properly, it is quite a tasty cut.

Team Red was coached by Balboni, Biancalana, and Sabes. Due to the continuous lineup rule, I led off this game, but was an "extra hitter"; I did not play in the field.

Team Red's pitcher struggled. Most of his pitches were feet outside of the zone. As I pointed out in the rules, this is where the "nobody came to walk" philosophy really bit us. I must have had a "count" of something like 8-0 before I got a marginal pitch and swung, only to make an out. When you're not talking a walk, there's a real psychological pressure to swing at that one pitch when you do get it, and it usually results in bad things. 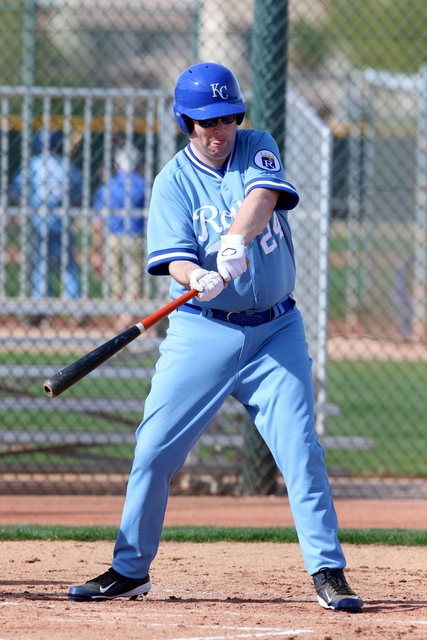 Swinging at marginal pitches is a bad idea, whether you're a major leaguer or not

We got through about the first half of our lineup in the first inning, with each at bat roughly the same: 80% really bad pitches, and a swing at that one marginal pitch only to make a groundout or popup. Before we hit in the second inning, we had a quick meeting and agreement: we would finish out the first trip through the lineup as normal, but, the second time through, we would take the 4 pitch walks. We had to score some runs.

I think the bases were loaded when I came up again. Since I led off this game, I was the first to adopt our new offensive philosophy. Sabes had other ideas. He must have been Belichick-ing and heard our conversation, because he came out of the dugout and started dragging the screen out to the mound. There was about a 5 minute argument between Jamie and Sabes about the premature use of the screen (it was the 2nd inning). Sabes complained that his pitchers couldn't throw strikes; Jamie agreed, wondered why that was our team's problem and all but said that we were going to make them pay for it now. The umpires weren't really willing to intervene as this situation isn't addressed in regular baseball rules. Meanwhile, I was waiting at the plate. Ultimately, Sabes prevailed, and out came the screen.

I said in the previous game that trying to adjust my rhythm up from soft toss to actual pitches was difficult, and the reverse was also true. Jamie's tosses had a late diving action that made them really difficult to track (he's also pretty tall, which doesn't help). I weakly grounded out to the infield, driving in a run in the process. He mowed us down, and while it was never explicitly stated, I think walking on your own coach's pitching was not allowed. You could take pitches and the umpire would call them as they were, but nobody walked. We couldn't even hit the screen for lousy singles. I don't remember how, but despite Jamie's near no-hitter against his own team, we won this game 8-7. It would be the only game we would win.

I could say things, but I don't think anything would beat this photo: 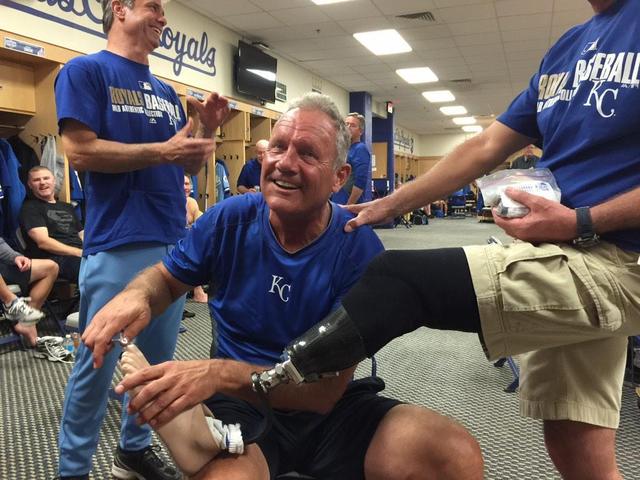 Sense. This picture makes none.

On the trip back, I rode back with Motley. Somebody in the van mentioned that he played some in Japan with Mel Hall. If you don't know who Mel Hall is, you might want to put on some barrier material before you go read the SB Nation article on him, and take a long shower afterwards.

My dad and my wife arrived at the hotel that night. Dad had gone to Fantasy Camp in 2014, so we hooked up with some of his teammates who were doing it again this year. The alumni were having their dinner together, so we were on our own. We ate at a place called "Native", which is basically a more local version of Buffalo Wild Wings. I confessed my injury to my wife; I had avoided the topic when I called her the night before, as I was worried that it would have affected my play later. We went back to the hotel and called it a night.

In the next installation, we get a visit from Salvy, and the Bud Black ball story comes full circle. Also, our offense continues to look like the 2014 Royals. And the Royals of the last two weeks, for that matter.