On July 15 through the 17, my wife and I celebrated my birthday with a minor league baseball road trip to Pioneer League games in Idaho Falls, Idaho, Helena, Montana, and Ogden, Utah. By dumb luck, two of our games turned out to be doubleheaders due to rainouts the previous week. So we were able to enjoy 39 innings of baseball at three stadiums in three days! It doesn't get any better than this, folks. 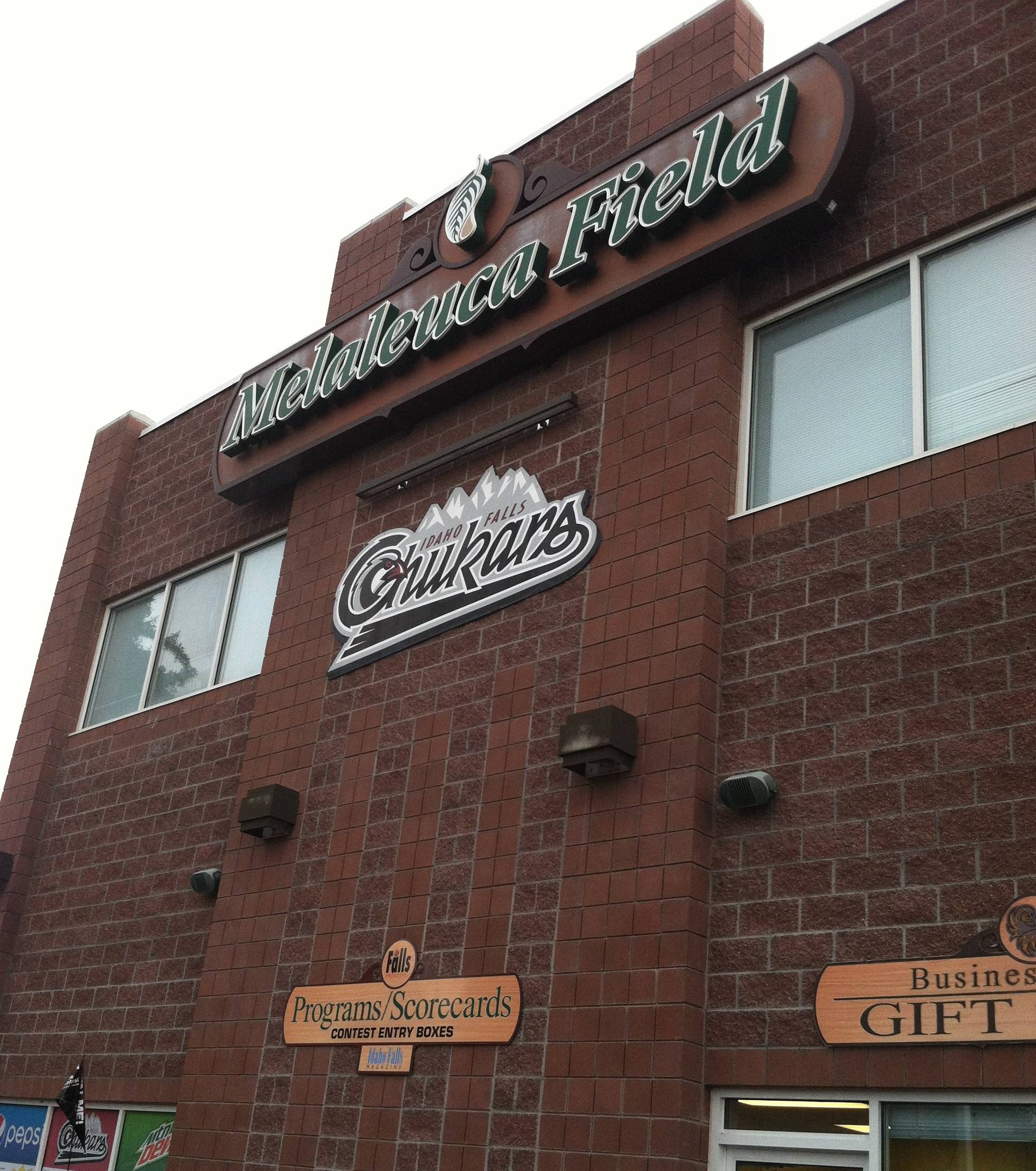 Melaleuca Field, named after a shady multi-level marketing company that helped finance the stadium's construction in 2006. My previous trip to see the Chukars was in 2005, when they called the humble aluminum palace McDermott Field home.

Our journey began at Melaleuca Field in Idaho Falls. After an early supper at Snow Eagle Brewery (the Beavertail Brown was good) we arrived at the stadium for game one. Careful not to park too close to the right field wall, we reached the ticket booth just as a drizzle began. We bought two GA seats for $7 apiece and headed inside. 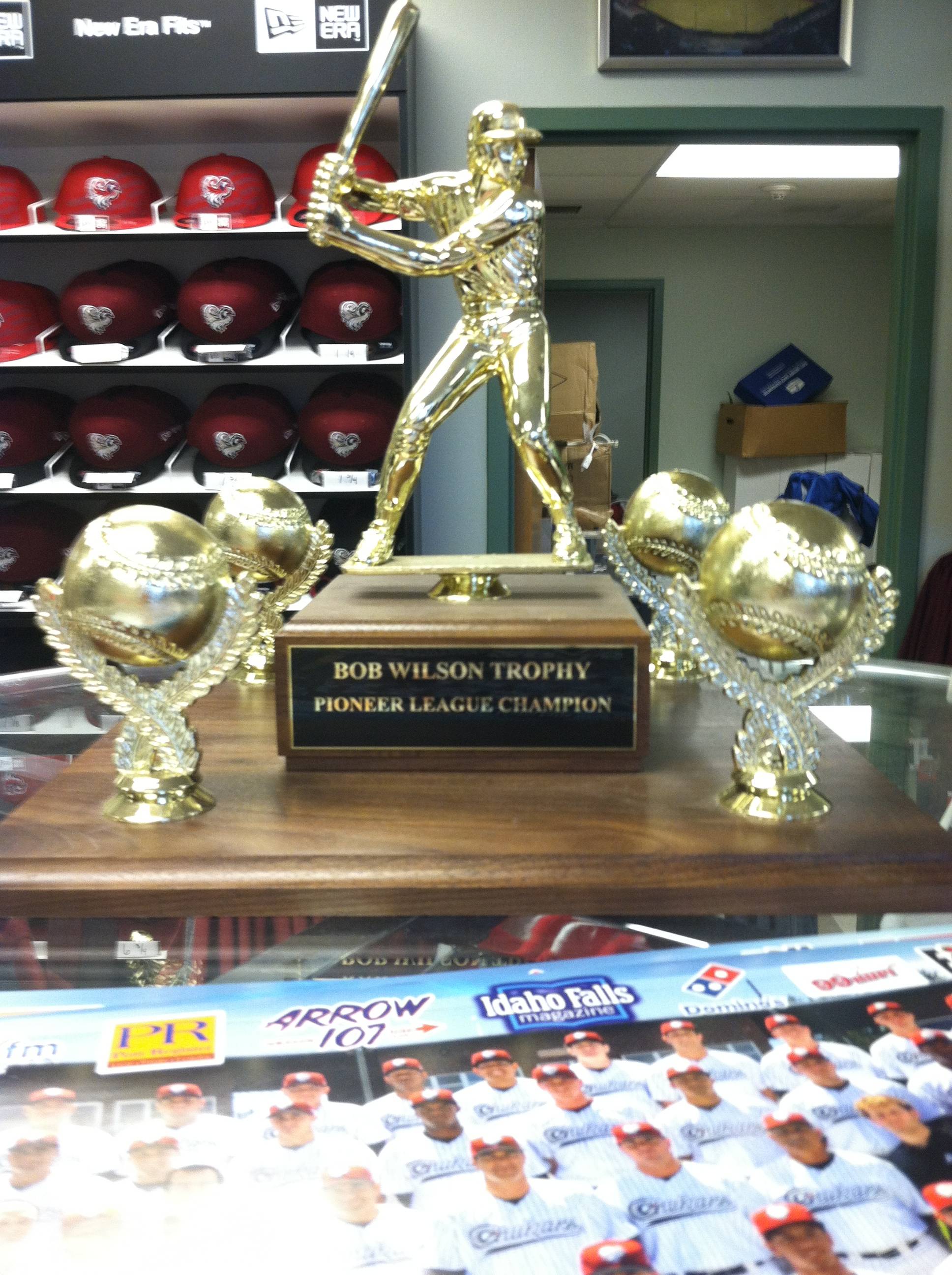 The Bob Wilson trophy for the Chukars' 2013 Pioneer League championship sits atop a rack of jerseys in the team store like a common tchotchke.

The Chukars' opponent was the Missoula Ospreys, rookie affiliate of the Arizona Diamondbacks. Since the rainout was in Missoula, the Ospreys were the home team for game one. It was weird. The crowd was sparse for game one, and the rain became heavy during the first two innings, but the teams played through it, and the weather was downright pleasant by the end of game one. 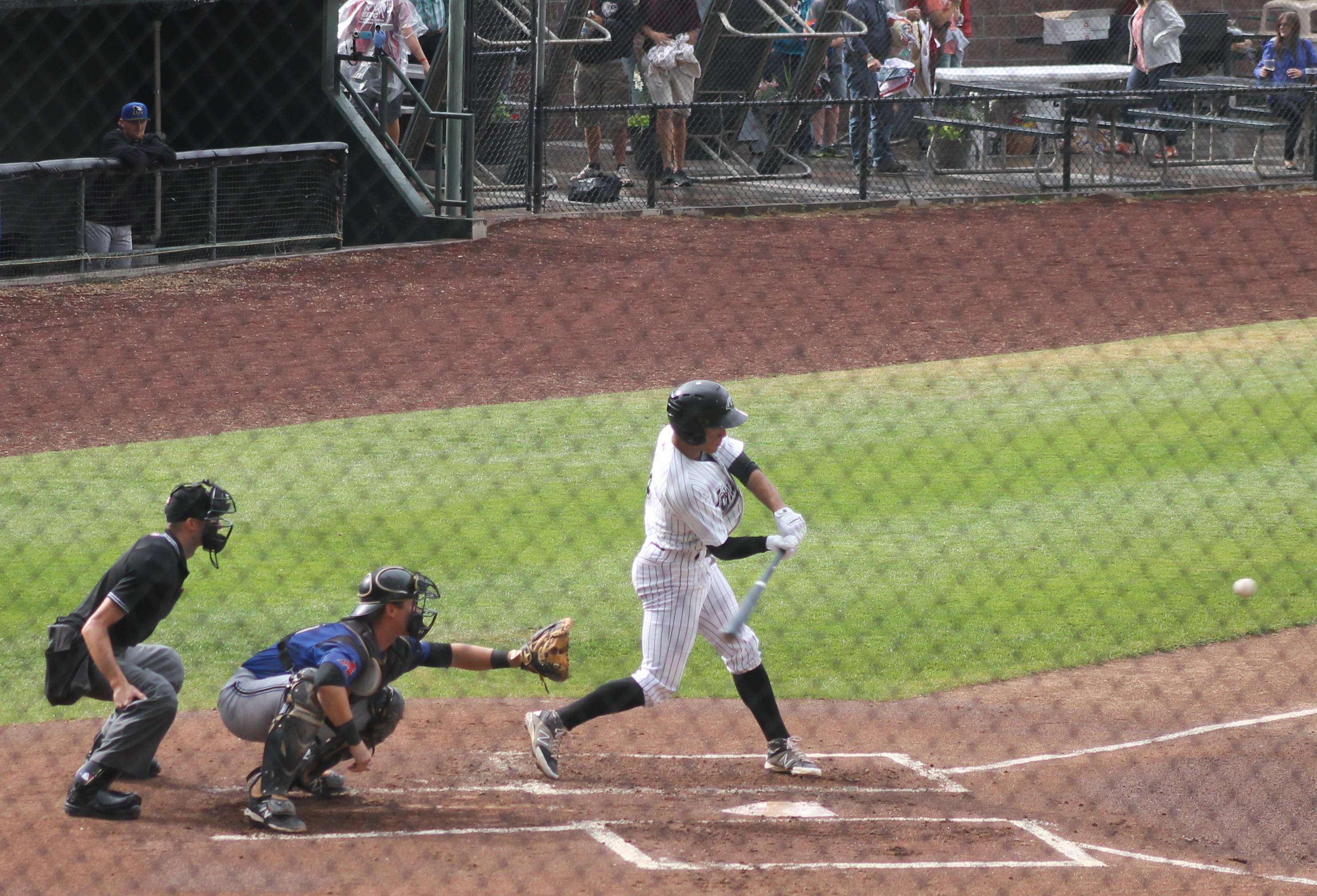 Marten Gasparini, 18 year old Italian shortstop, went 2 for 5 with a triple and two walks in the doubleheader. His OPS is 630 on the season.

Game one was a pitcher's duel, with the Ospreys' Anfernee Benitez and the Chukars' Carter Hope putting up zeroes through the first five innings. The Chukars broke through in the top of the 6th with a single by Cody Jones, followed by a stolen base, a bad throw by the catcher, and then an RBI single by DJ Burt. But Missoula evened the score in the bottom of the 7th on a throwing error by Burt. Both games were scheduled for seven innings, but with the game tied, we got bonus baseball! Unfortunately, Missoula prevailed with a walkoff solo homer by Luke Lowery in the 9th. 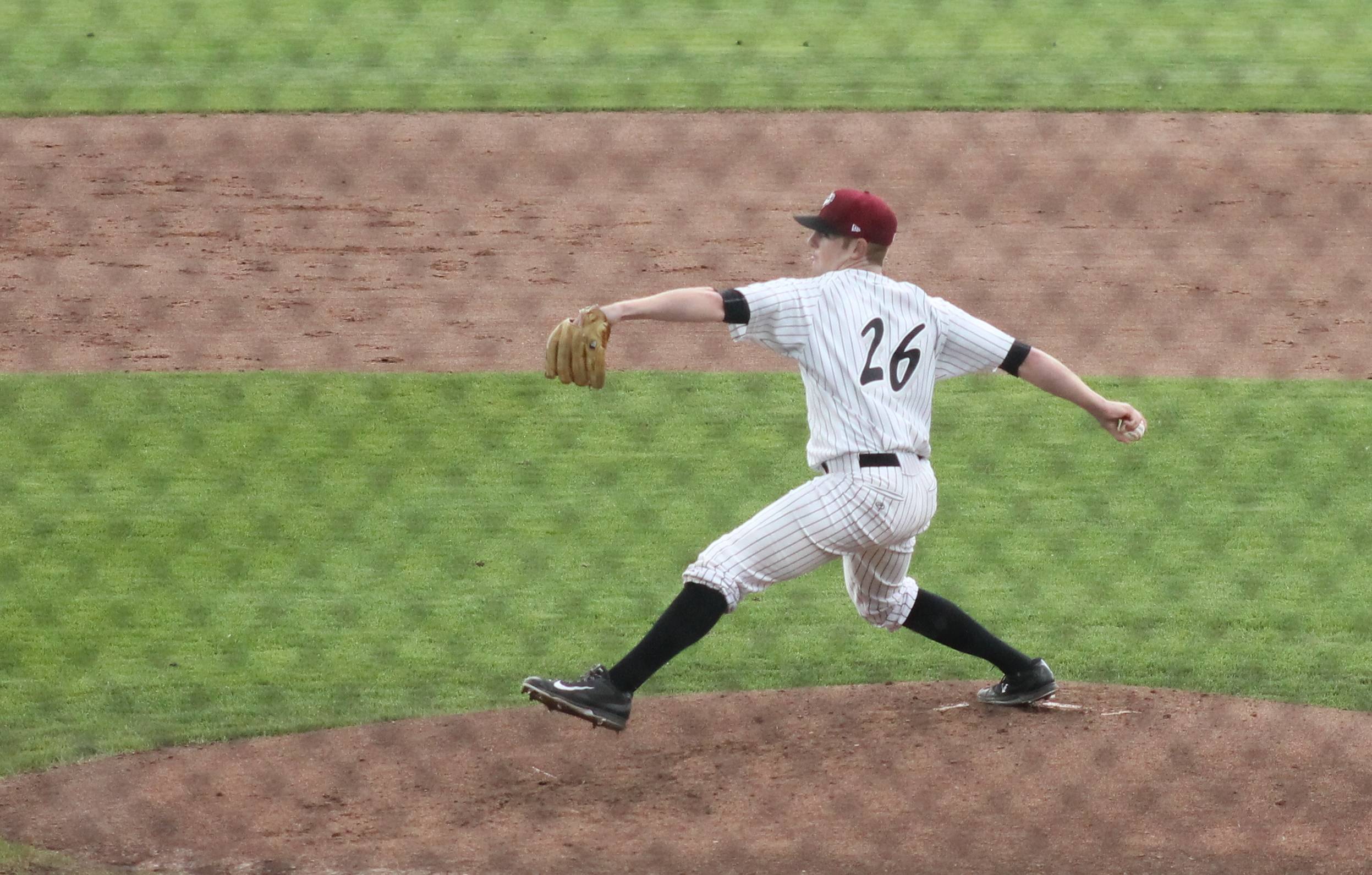 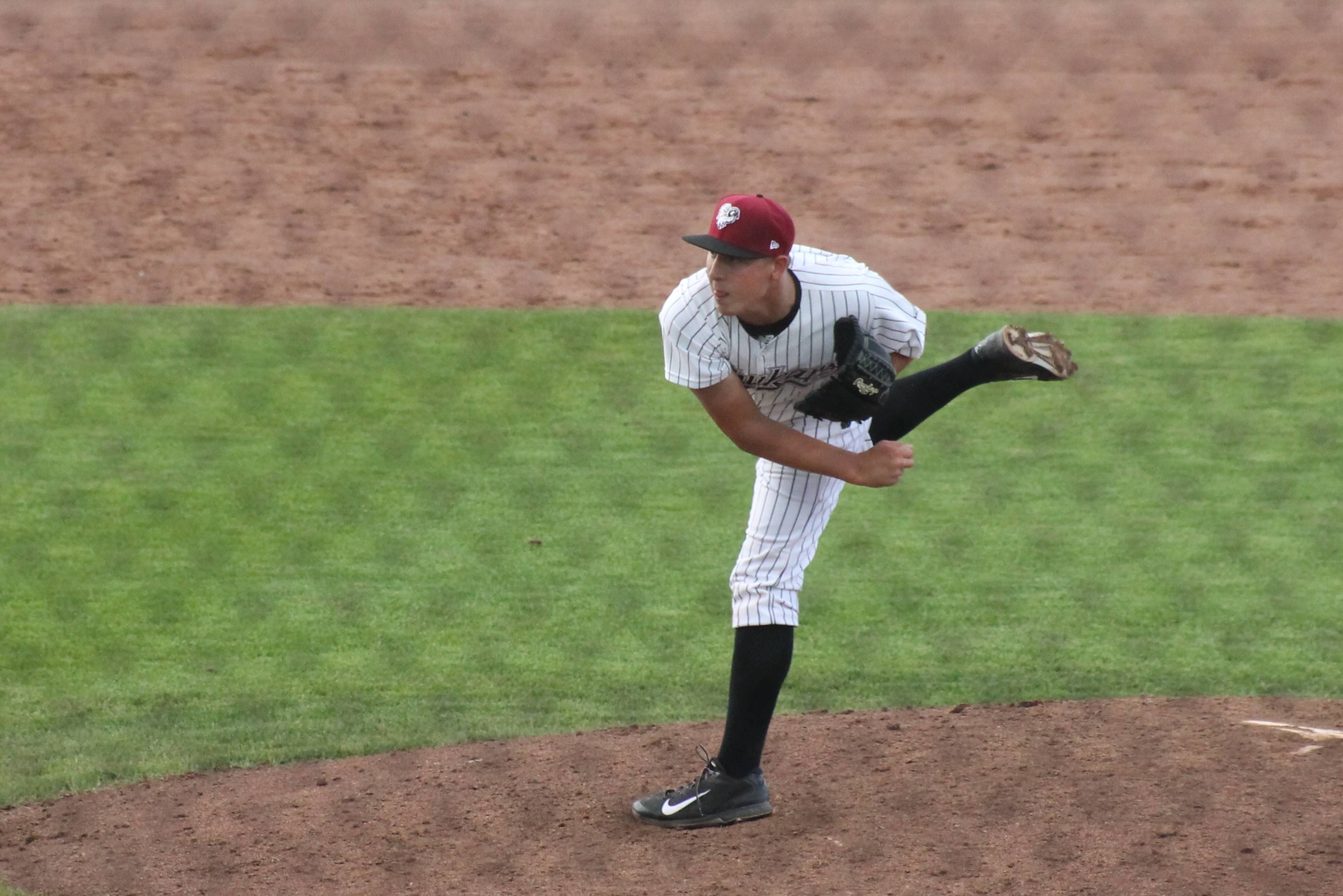 If Brian Bayliss can get his tongue fixed, the 20-year old might have a future in this game. 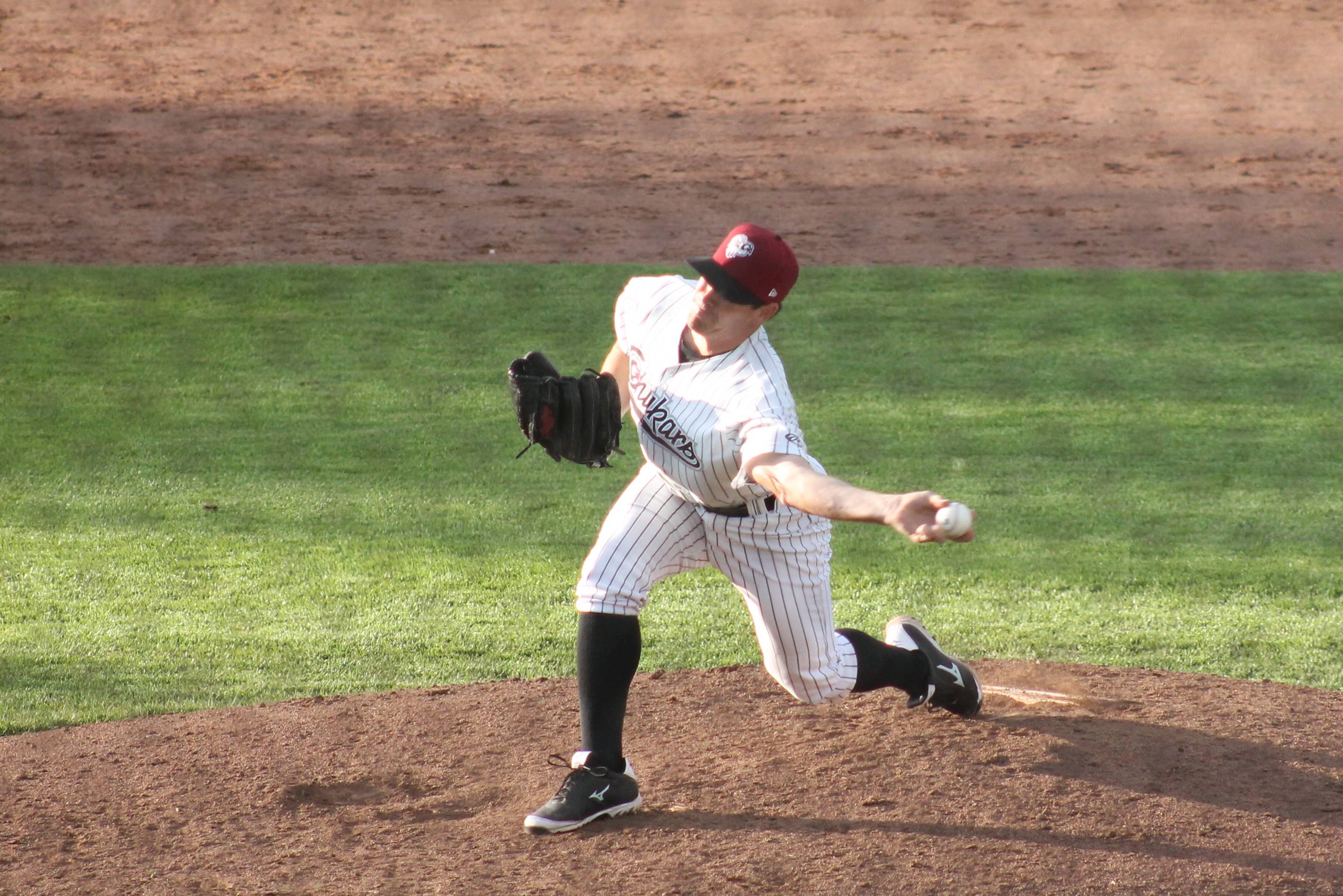 Tripp Davis took the loss, but he won our hearts with his submarine delivery. I think America's rooting for this 24-year old southpaw.

Game two was a more typical Pioneer League contest, with the two teams combining to score 18 runs on 14 hits, 15 walks, and three errors. Ugly stuff. Lowery hit his second solo bomb of the day, but Idaho Falls capitalized on 5 walks in the 5th inning, plating seven runs in the frame en route to a 10-8 victory. The game had the loudest, rowdiest crowd of our trip, with our GA section completely full. I was happy to see lots of youngsters present to cheer on the future Royals. 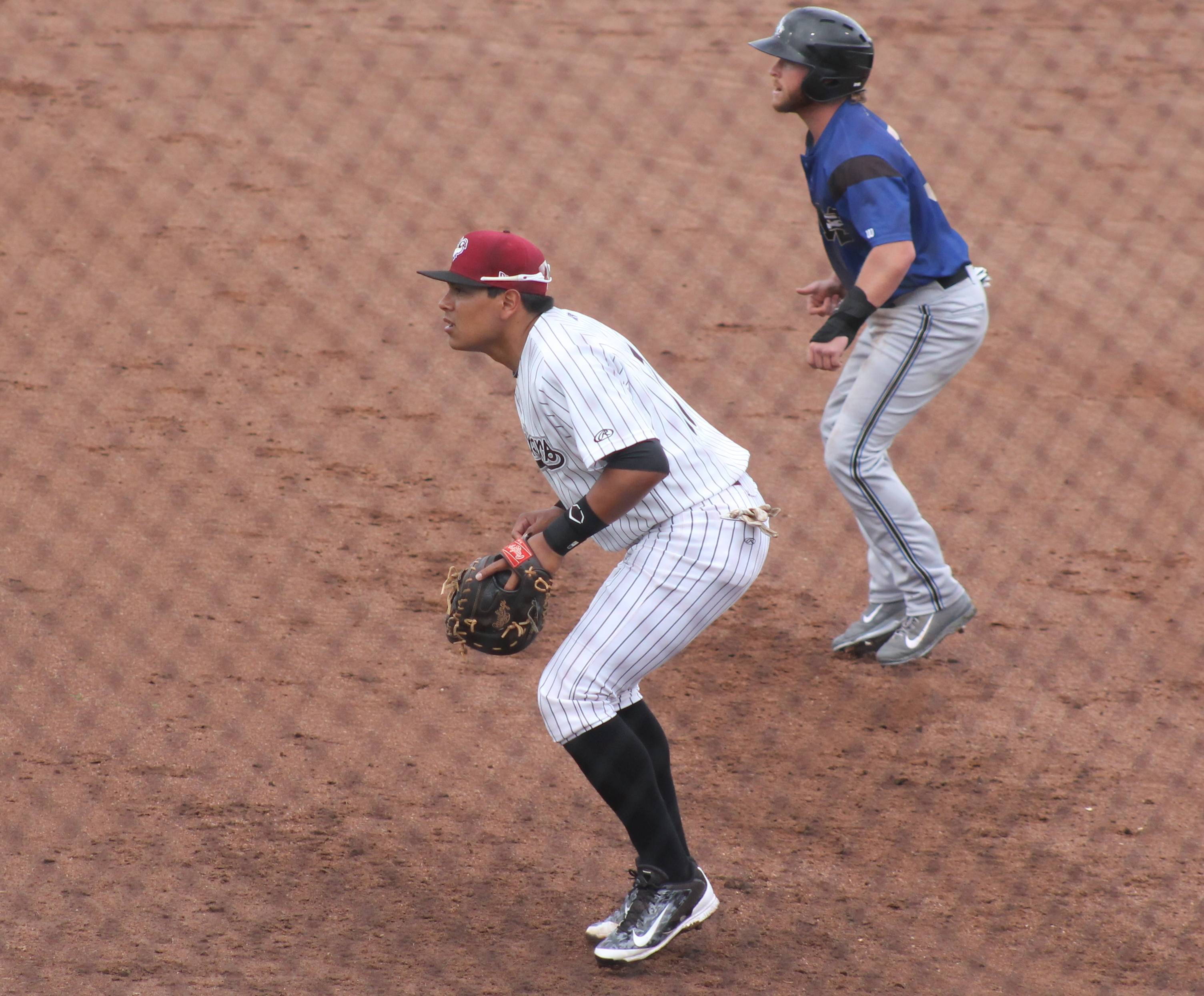 23-year old first baseman Josh Banuelos plays like he has eyes in the back of his head. He's leading the Chukars starting lineup with a 952 OPS. 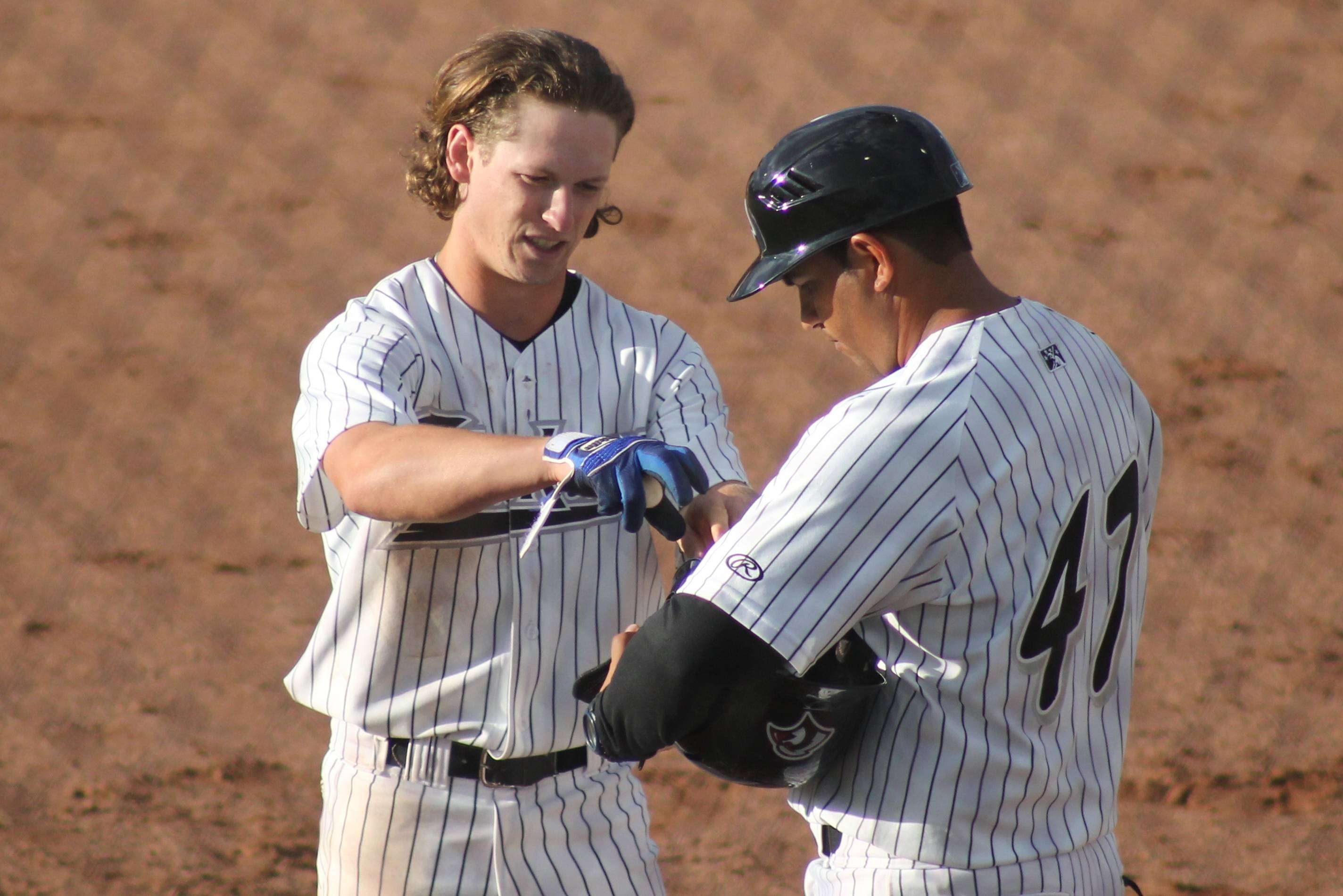 22-year old switch-hitting center fielder Cody Jones seems to have the hair for the show, but does he have the bat? The former teammate of Brandon Finnegan has a 724 OPS since being drafted in the 6th round earlier this year. We saw him make a couple of good running catches in the field. 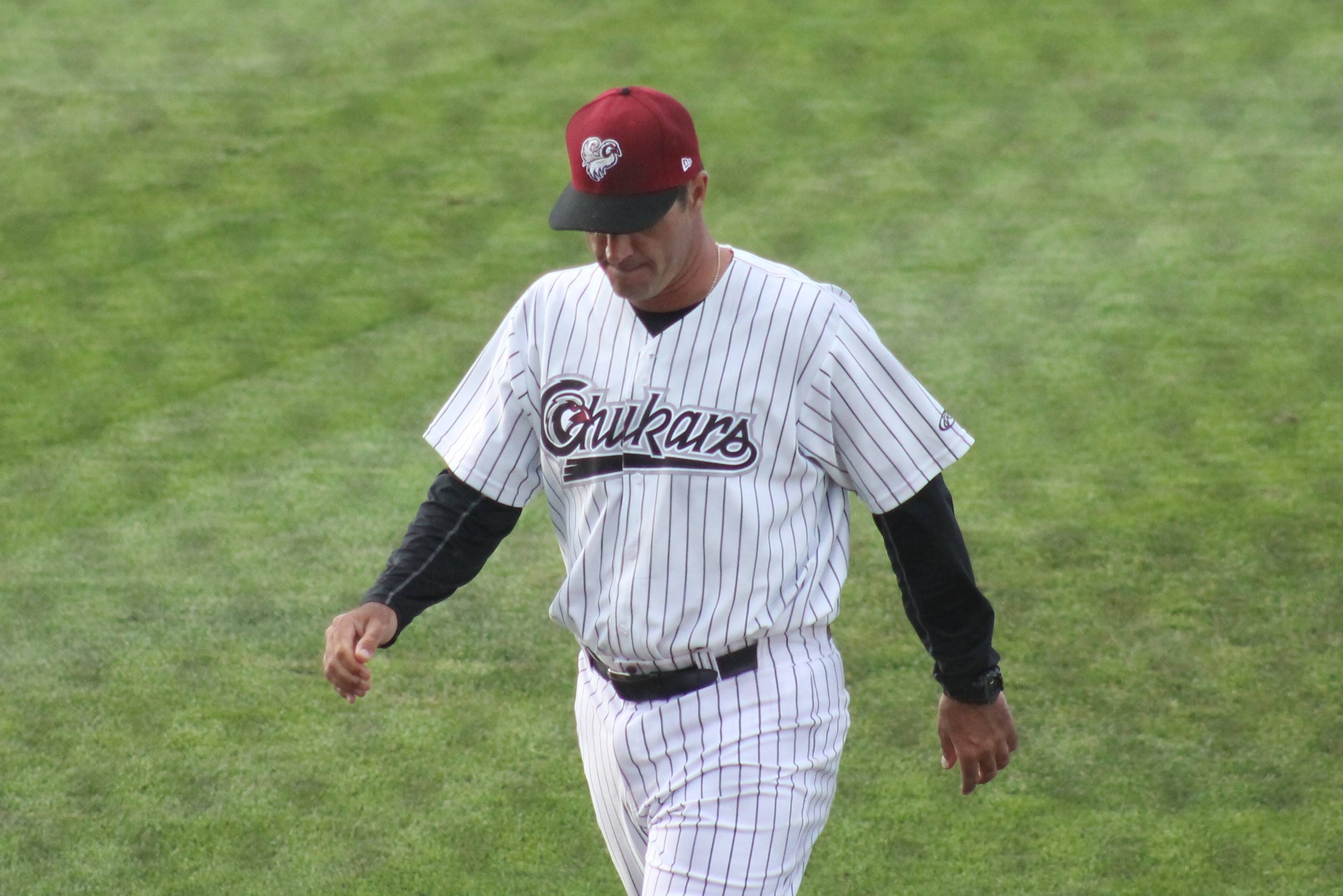 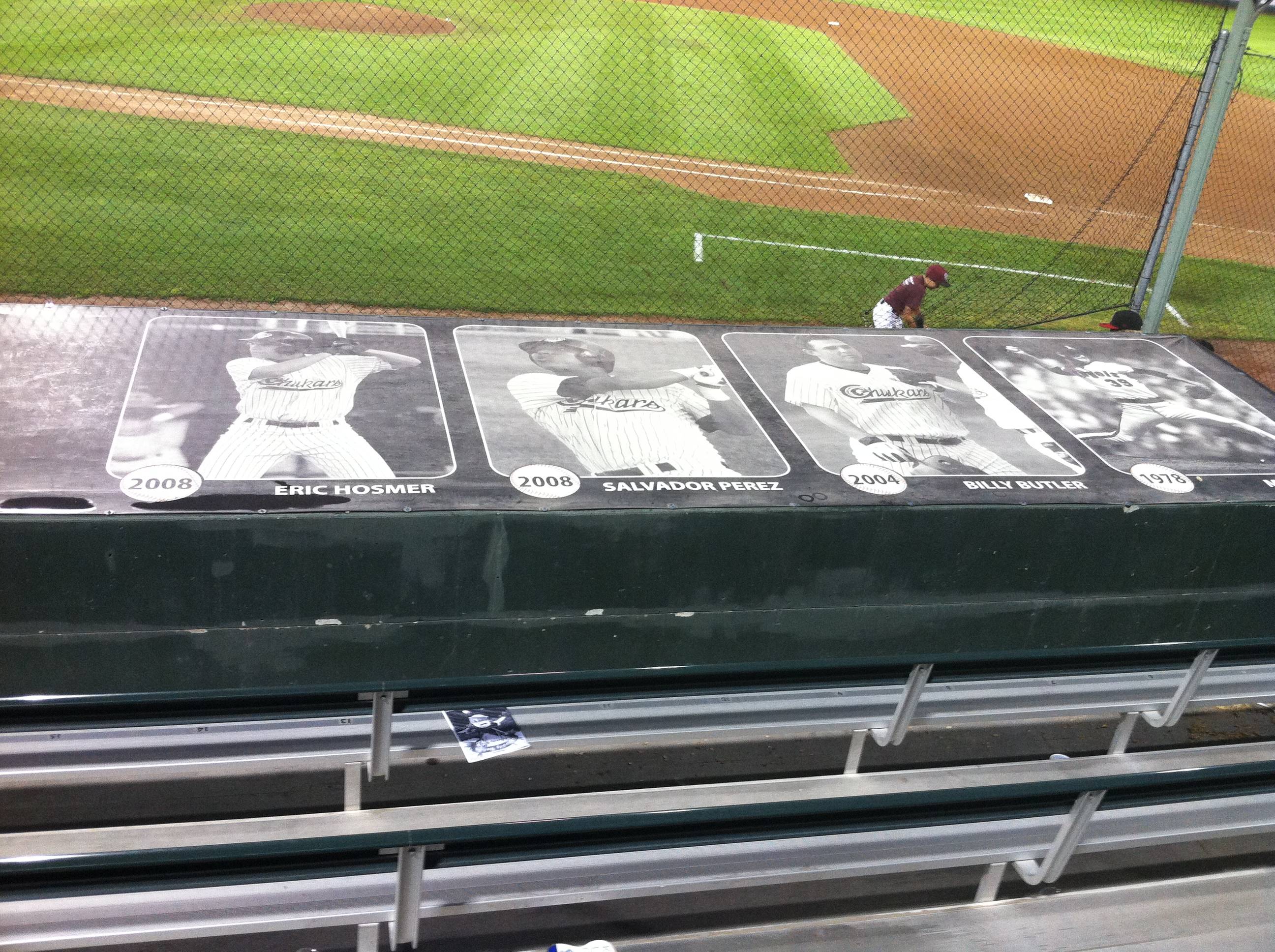 Legendary former players, immortalized on the roof of the Chukars dugout. Mike Witt is at far right.

The next day we made the drive north to Helena, Montana, where we saw the local Brewers take on the Grand Junction Rockies in another twin billing. We paid $18 for two seats in the second row, right behind home plate. In a reversal of the previous day, the Brewers won game one, and the visitors took the nightcap. 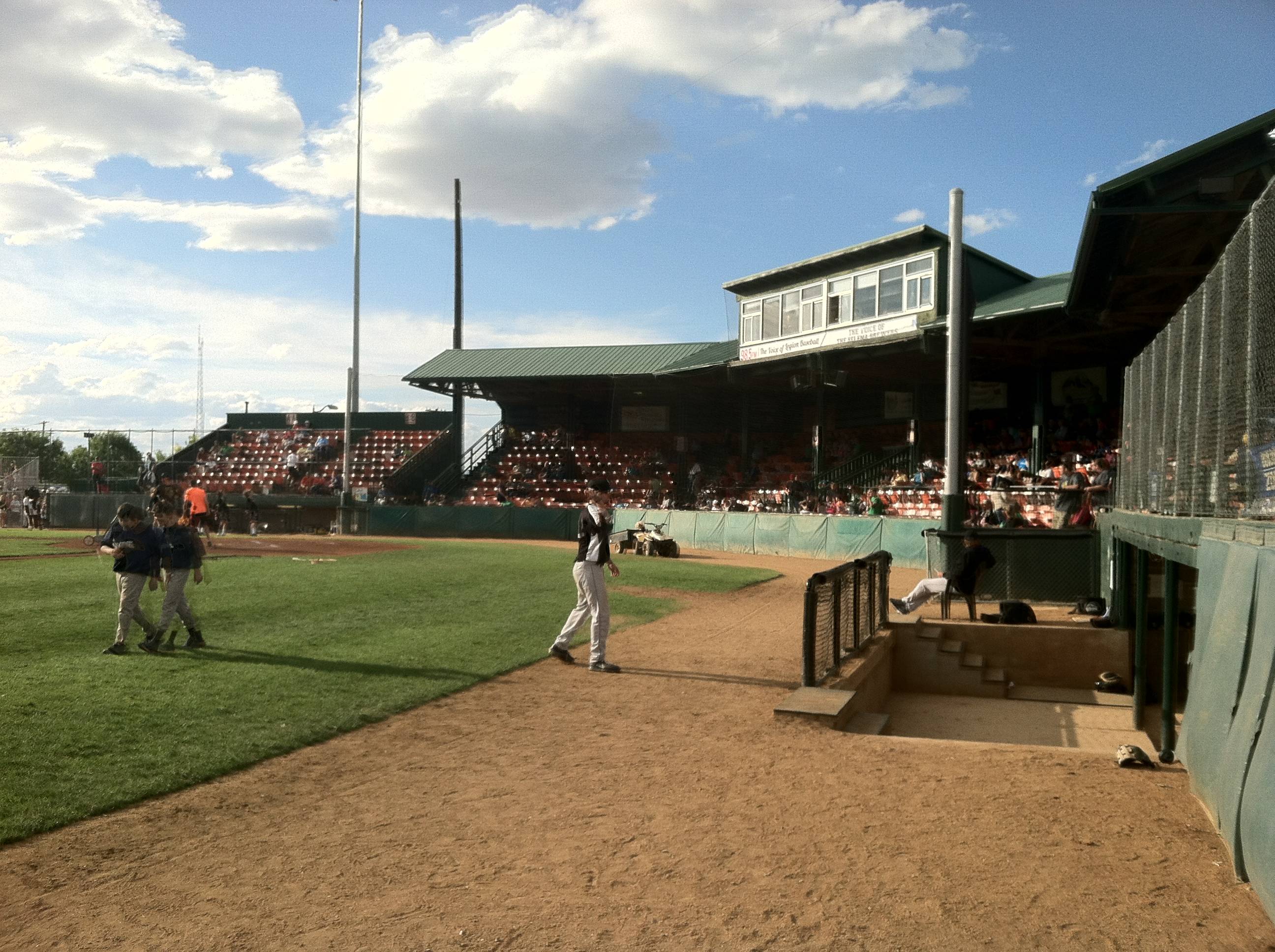 Kindrick Legion Field in Helena, originally built in 1932, for $1,500. That plastic chair by the visitor's dugout was held down by Rockies hitting coach Lee Stevens for most of the doubleheader.

I have often said that I usually see something new at every game I go to, and that day in Helena was no exception. Before game 2, Brewers DH David "Boom Boom" Denson took the mic, and in full uniform, belted out a fine gospel-style rendition of our national anthem. Sadly for Boom Boom, he couldn't hit the ball as well as he hit the notes: he went 0 for 6 with 3 swinging strikeouts on the day. 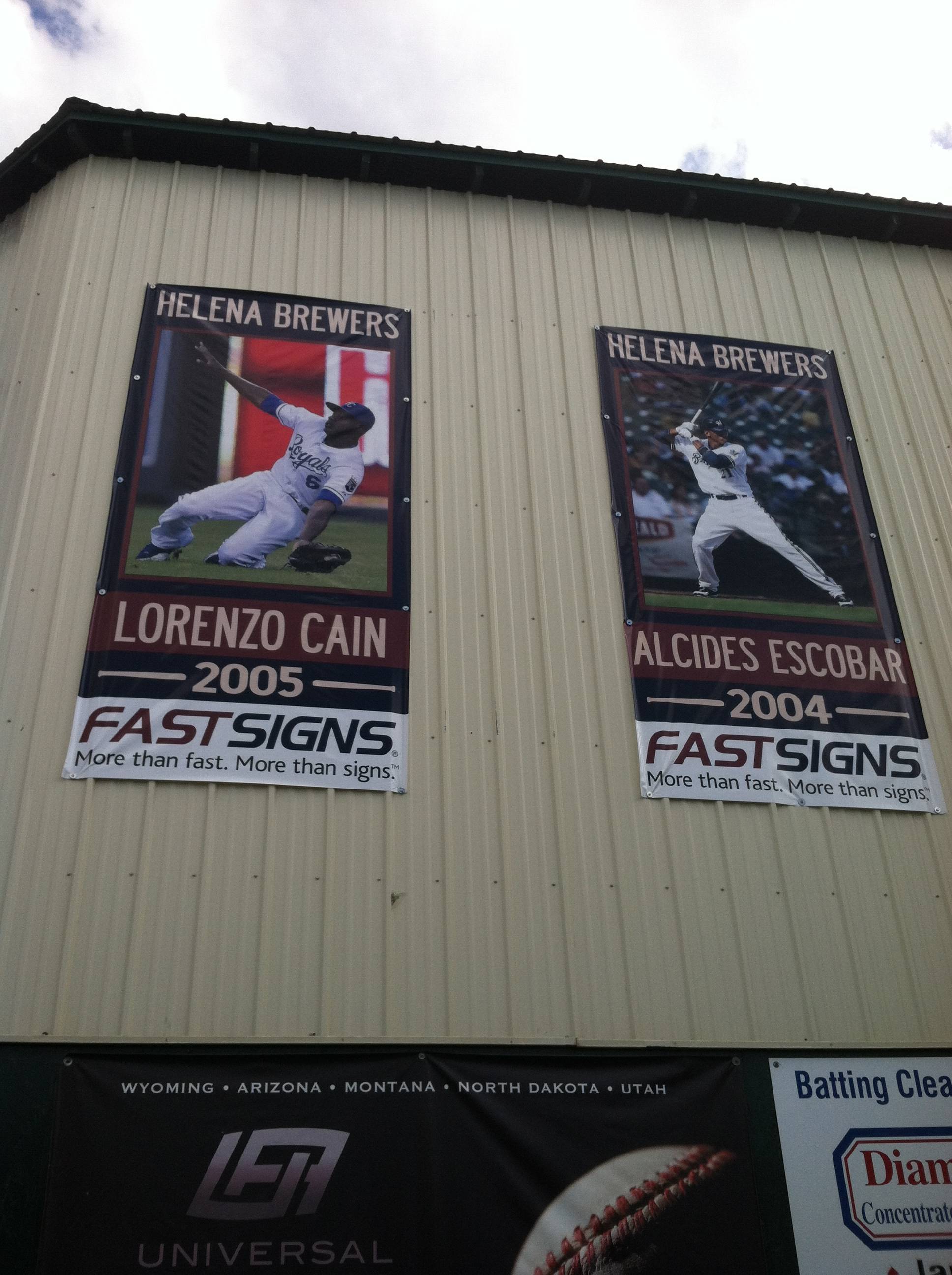 A couple of familiar names once played at Kindrick Field. Not pictured: Ryne Sandberg, who played here when the team was a Phillies affiliate.

Our trip concluded on day 3 in Ogden, Utah, where we saw just one baseball game for a change. The Odgen Raptors, a Dodgers farm team, hosted the Great Falls Voyagers, of the White Sox organization. Tickets were only $3 apiece for reasons I couldn't discern. Despite the fact that Great Falls, Montana, on the mighty Missouri River, was visited by Lewis & Clark, the Voyagers have a flying saucer mascot and neon color scheme. I will therefore forever root against them. And so when Ogden proved victorious in extra innings, on a walk-off home run by Gage Green, I stood and applauded beside the Angeleno-like late-arriving home crowd. 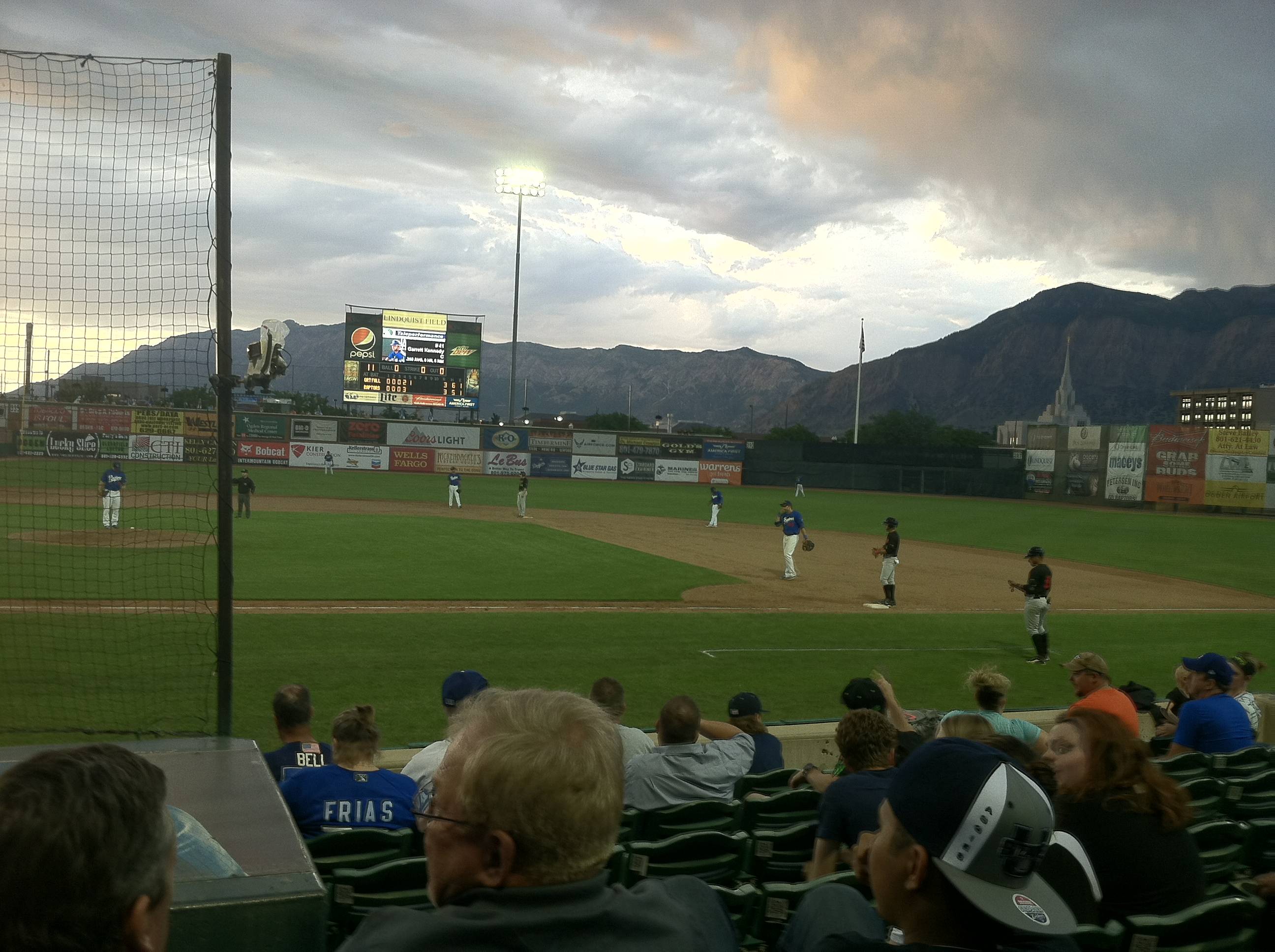 At Lindquist Field in Ogden, like most Pioneer League stadiums, you get baseball with a mountain view.

We have now seen nine out of the eight Pioneer League teams play (including the defunct Casper Ghosts) at six different stadiums. I hope you enjoyed this trip through the Pioneer League; I encourage you to catch a game or two if you are out west. The tickets are cheap, the temperatures are cool, and the baseball is played with vigor by raw young players!