Salvador Perez, Alcides Escobar, Alex Gordon, and Lorenzo Cain have all been voted in to start for the American League in the 2015 All-Star Game. It is the first time in franchise history the Royals will have four starters, besting the three starters they sent in 1979 with George Brett, Frank White, and Darrell Porter started for the Junior Circuit.

Salvador Perez will be in the All-Star Game for the third time, starting for the second consecutive year, although last year he was an injury replacement for Baltimore's Matt Wieters. Perez is tied for the league lead in home runs among catchers with 13 and is fourth in fWAR with 1.2 Overall, the two-time Gold Glove winner is hitting .263/.275/.446 going into Sunday's game.

Alcides Escobar will make his first All-Star appearance after winning the vote at shortstop. Escobar is tied for fourth in the league in dWAR at shortstop and fifth in fWAR, hitting .277/.315/.358 with 2 HR 28 RBI going into Sunday's game. 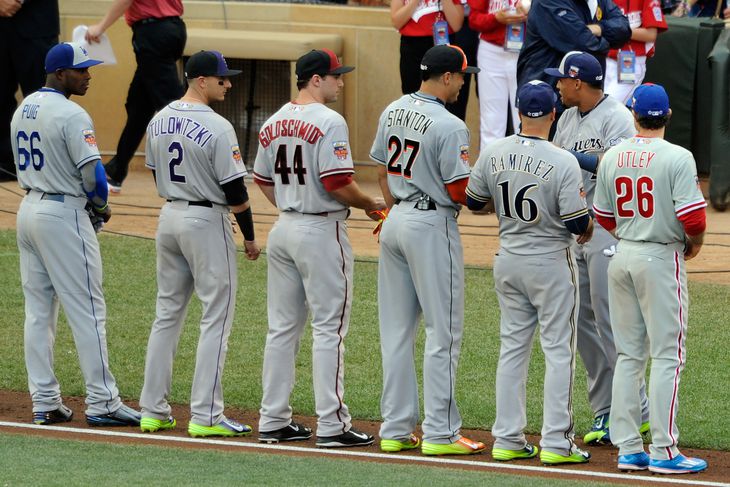 Our best guess at who will head to Cincinnati.

Lorenzo Cain will also make his first All-Star appearance after finishing second in voting in the outfield. The 29-year old is fourth among American League outfielders in dWAR after leading the league last season. He is second behind only Mike Trout in fWAR among league outfielders with 3.6 and is enjoying his best offensive season, hitting .309/.365/.467 with 6 HR 36 RBI.

Alex Gordon will make his third All-Star appearance, but his first start. A recent slump has taken him down to .260/.377/.419, but he is third among all outfielders in fWAR from 2014-2015 behind only Mike Trout and Jose Bautista.  The four-time Gold Glover did not appear in last year's All-Star Game, and went 0-1 in the game in 2013.

Royals fans stuffed the balloting all summer, with eight of their starting players leading in voting at some point this year. Ultimately a late surge against the Royals catapulted Detroit's Miguel Cabrera past Eric Hosmer at first base, Houston's Jose Altuve past Omar Infante at second base, Toronto's Josh Donaldson past Mike Moustakas at third base, and Seattle's Nelson Cruz past Kendrys Morales at designated hitter.

Moustakas, Hosmer, and Wade Davis will be candidates to be reserves, which will be revealed tomorrow night at 6 CT on ESPN. Royals manager Ned Yost, in conjunction with Major League Baseball and a player vote, will determine the reserve roster.

The All-Star game airs Tuesday, July 14 from Cincinnati on FOX.