I never really plan to write these things. Like many of you, my sole concern after Thursday night was to find the quickest way possible to have an AL Central Champions shirt on my person to wear, spill on, sweat in, and generally cavort around Minneapolis (where I live) in a gloating fashion until someone with authority over me tells me to stop (i.e. my wife).

I settled on this one. 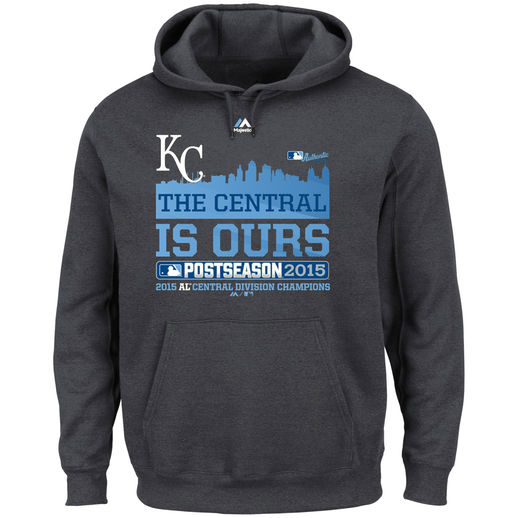 Simple, to the point, a definitive statement that cannot be argued against, and is thankfully lacking in contrived marketing slogans that don't make a lot of sense (Always October, anyone? No. No it is not.). It's just a fact for a full year now: The AL Central belongs to the Royals. The sweatshirt belongs to me.

Anyway, I'm sure those of you that needed something similar applied some sort of logic to the process, bought some gear that was to your liking, and that was that. I, however, always get sucked down the rabbit hole on the Royals online stores though, and before I know it, I have 50 tabs open of things that make me go "hmmmm..." Normally I just stick to the Official Royals store, but I recently found that Fans Edge also has some things that just can not be ignored. Here are my new favorites, click the links to give MLB more of your money.

Let's start this off by looking at some clothing. 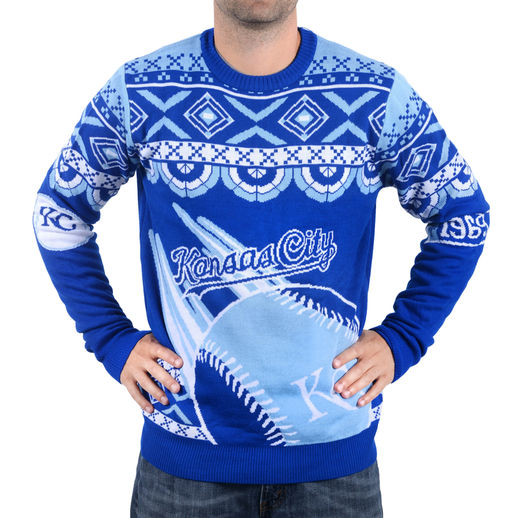 I don't mean to start this out with some sort of racial commentary, I really don't. I just think we can acknowledge that this shirt was likely drawn up by white people with white people in mind in the sweater art director's office. I can definitively say this not just because I speak with the authority of being a white people myself, I know it because it's referred to as an "ugly sweater". Not a "baseball sweater" or a "festive sweater" or "busy sweater" or whatever else you'd want to call it. Nope, this one's UGLY, and only certain factions of white people are that concerned with conveying to the world how advanced their sense of irony is. What's really concerning about this to me isn't that this exists, it's that it's one of 3 different "ugly sweater" designs available in the store. Irony has come full-circle now hipsters, the mainstream is onto your act and you're going to have to try harder than ugly sweaters now. 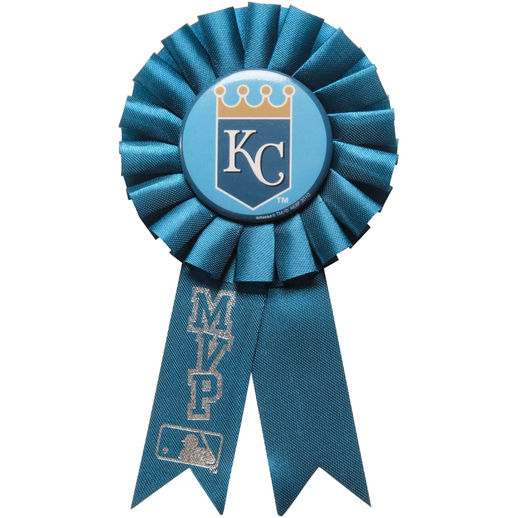 For one, you could try this authentic Jeremy Guthrie participation award. Wear proudly! 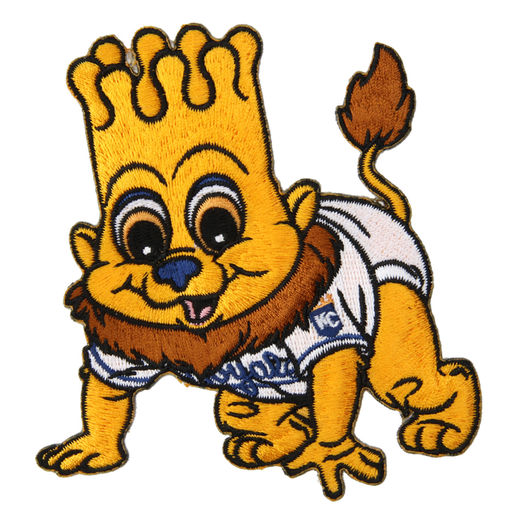 Or you could go with this anthropomorphic mutant sea monkey patch for you to customize any of your clothes. 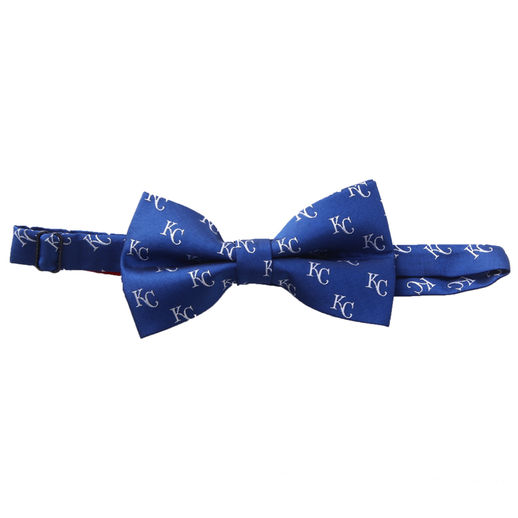 Ok Orville, let's move along before someone tells me my favorite bands suck. 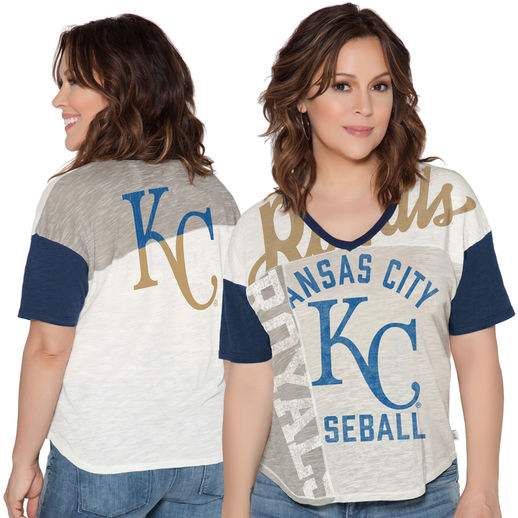 Did you know Alyssa Milano is now apparently a fashion authority on Royals women's clothing? I sure didn't. I can't even remember the last time I thought about Alyssa Milano. My 15 year old self remembers she got naked in a movie or something once upon a time, and now my 33 year old self is too lazy to even IMDB what movie that might be. Yet here she is trying to get you to buy a Royals collage shirt that definitely won't look dated in 3 years. Alyssa Milano not included. 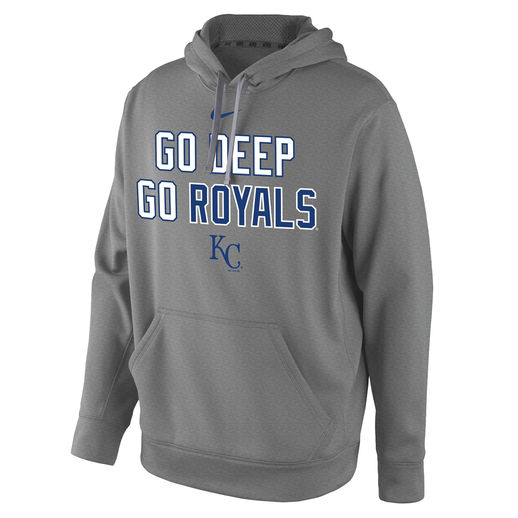 Ah, Nike, with their clever slogans rife with innuendo. For way too much money, you can proudly display your desires for success in the game day micro sense (hit a home run here!), the playoffs macro sense (World Series or bust!) or the creepy carnal sense (no explanation needed). 100% bro-certified. 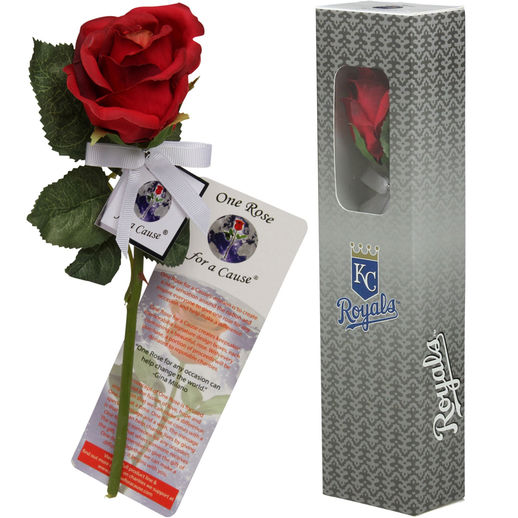 Yes, a single, synthetic Royals branded rose. I'm just as confused as you are. 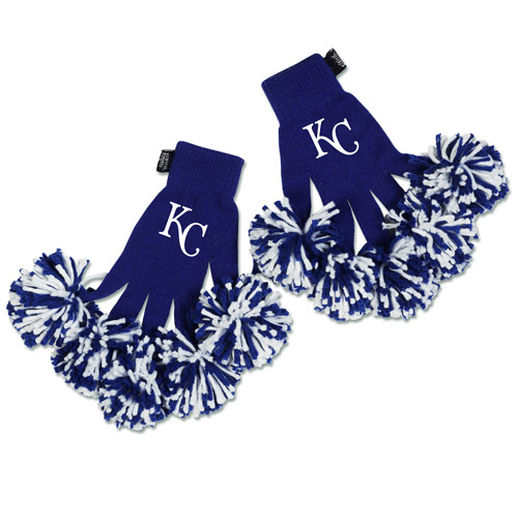 Yo dawg, I heard you like cheering, so I... Nevemind. I think these things would only be popular with parents looking to ground their kids from their smart phones. 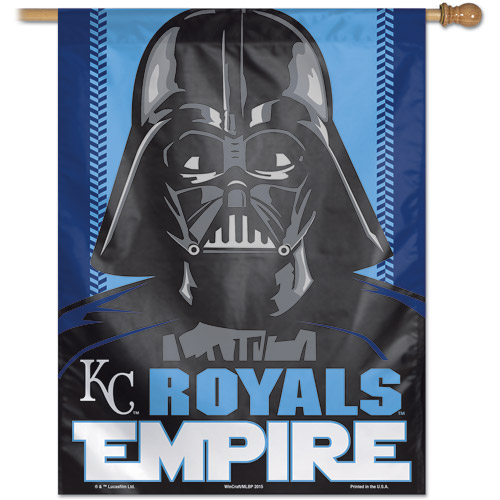 Yes, for those of you who want to show the world you're simultaneously hopeful yet fearful about JJ Abrams' vision for Episode 7 and the Royals's October chances, we now have officially licensed Star Wars/Kansas City Royals merchandise. It'll look great hanging in the yard, the neighbors won't mind at all. 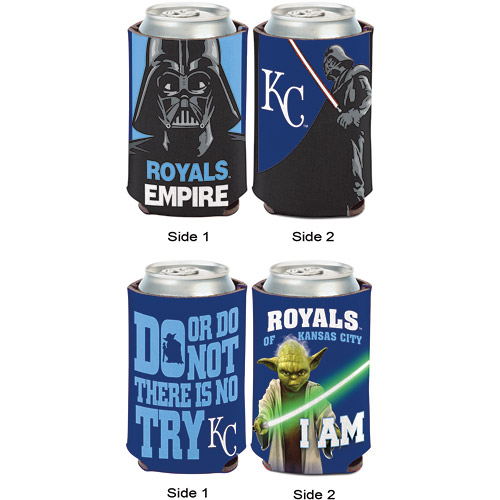 Ok, these I can get behind. Sure they're kitschy, but at the end of the day, they're really just keeping your beer cold at the tailgate. It's not like a beer koozie ever directly inspired someone into bad decisions worthy of derision, right? 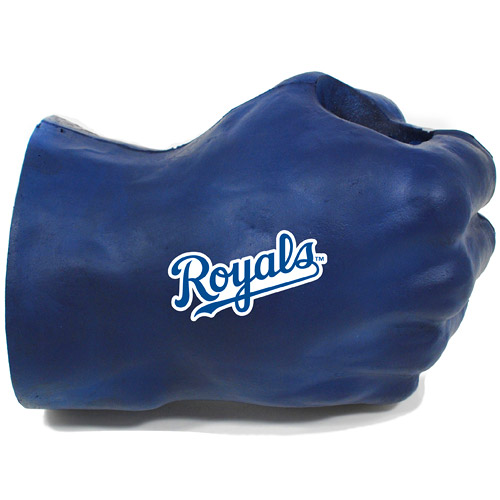 Wrong. Hulk Hands for beer! I believe this product is marketed towards guys named Mike or Steve or Rick that want to announce to all of the cars in their lot number that they do fully intend to go through that 24 pack of Bud Light that they brought, and no, they can't share any because the beer commercials told them that sharing shitty beer is an affront to their masculinity.

In summary, if you have $25, if you'd like to be readily identifiable as the most obnoxious person at your tailgate, and if you'd like to have issues on your regular 15-minute cycle trips to the port-a-john that may or may not end up viral on YouTube, by all means, buy the Hulk Hands. 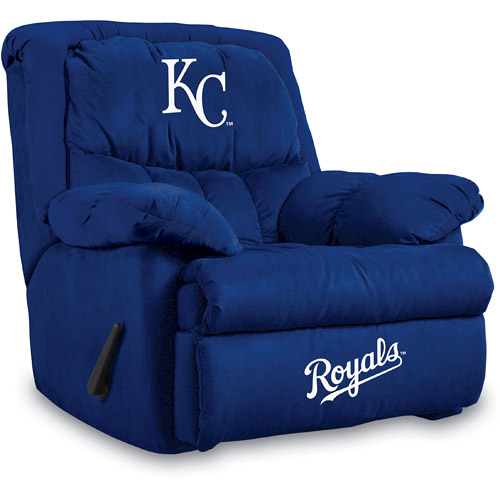 Would you want one? I'm not ashamed to say I would. The price point is a little high though, I feel like 90% of the people who would want this could never justify shelling out $800 for it. The company that makes them apparently agrees, as the Royals logos look suspiciously like they were MS Painted onto a blue recliner. I'm guessing the only person who is buying this is the person who is also buying a... 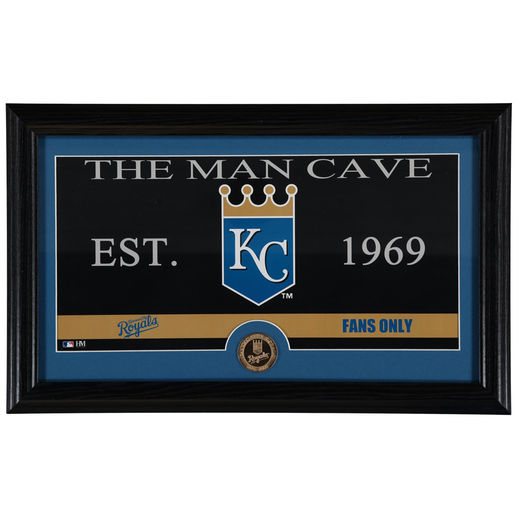 Yep, a Man Cave sign, 2006's update to the "No Girls Allowed" sign. You can usually find them in just about any sporting goods store, and I guess there's nothing really special about this one - it's just that the dichotomy of plastering MAN CAVE on a nicely framed and matted Royals logo with an establishment date and coin on it is just ridiculous to me.

Oh well, it could be worse. 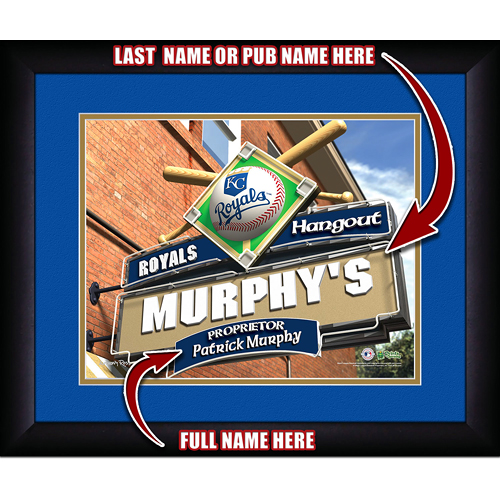 Like this. "Man Cave" is more of a personal pet peeve of mine that I wish would just go away, but I suppose it's acceptable in the lexicon of many people and I need to let it go. Being the proprietor of your own imaginary bar is something I have trouble letting go. For the record, this thing is not new; I've featured it in one of these articles before. What is new now are the directions on the image, which to me says something about the people that are purchasing this stupid thing. Like the process of figuring out which Photoshopped text goes on which part of the imaginary pub sign is so far beyond the Patrick Murphys of the world, the creators had to put the instructions on the image as a sort of de facto warning label that yes, this product will require input from you, the consumer. Make sure you're OK with this before purchasing and potentially ruining a customer service representative's afternoon. 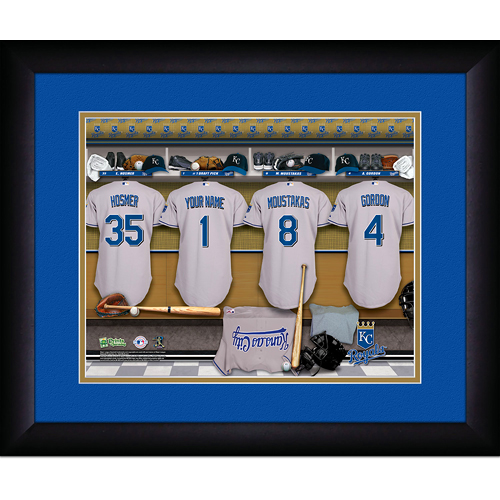 One more item for your MAN CAVE here. I just wanted to highlight that they've updated this proud display of your arrested development to include Royals players that actually play for the Royals and are likeable (i.e. no more, Soria, Butler, or Yuni.) You're also just hijacking Dyson's number now instead of the late Dick Howser's retired #10, so you can at least feel better about yourself while looking like a 10 year old. 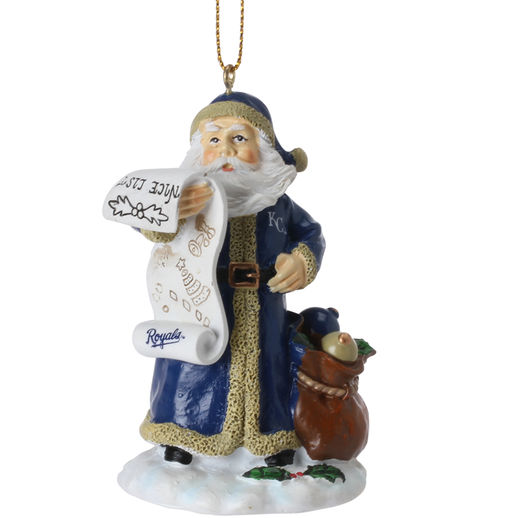 This one's subbing in for the ubiquitous garden gnomes this time around. I like that Santa ditched the ugly Cardinal red getup for Royal blue because I'm absolutely the guy who's spiteful enough to ban the color red from my house during Christmas if October doesn't go to my liking. But it's not just that he's wearing blue, he's wearing a Royals robe and carrying a Royals nice list, which implies that he's a specifically Royals Santa. 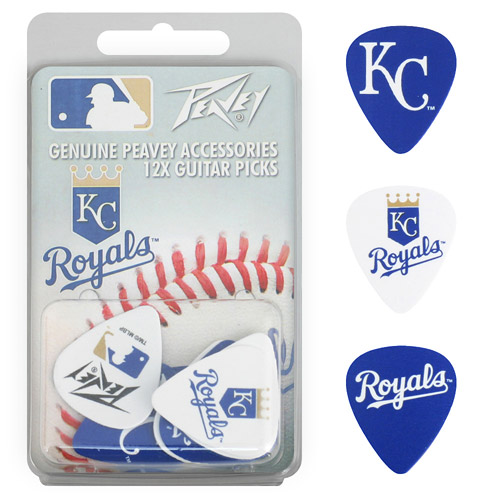 I don't really have anything to say here, I think I just wanted Phil to know they exist. 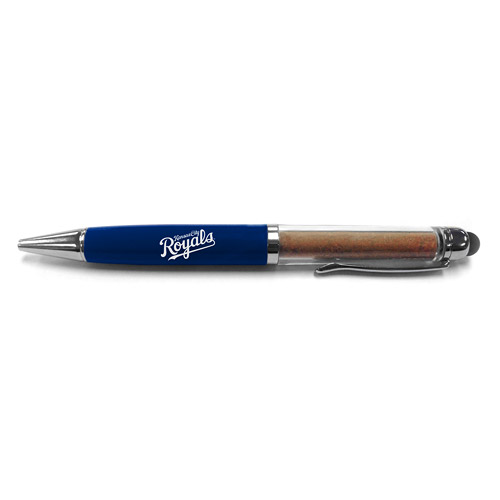 Finally, tangible grit! All of the previous dirt collectibles were basically glorified display pieces, but this one has functionality! And who couldn't use a little intangibles boost in their day to day business dealings? 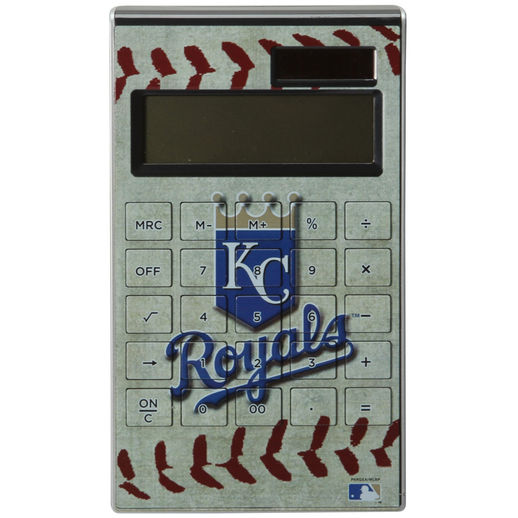 A vintage Royals calculator, likely game-used from the 2012 analytics department. Has all of the necessary functions to calculate the essentials like ERA, RBIs, pitcher wins, and batting average. 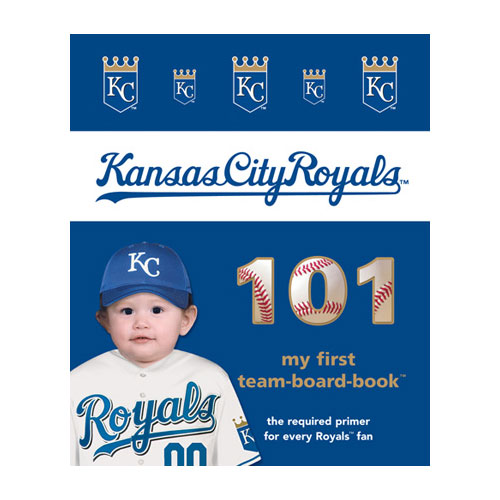 I don't entirely know what this is. I assume from the man-baby Photoshop job on the front and the "my first team-board-book" sub header, this is a cardboard book made for infants. Which makes the fact that the title is "Kansas City Royals 101" even funnier. I'm imagining 20 pages full of just humorless, literal instruction.

This is a Kansas City Royal. It plays baseball.

This is Kauffman Stadium. Baseball is played here.

This is George Brett. He was good at baseball.

This is the I-70 Series. The Royals won. St. Louis Cardinals dispute this.

This is a blue book page. Write what you learned about the Kansas City Royals here. Do not gnaw or slobber on corners of pages. 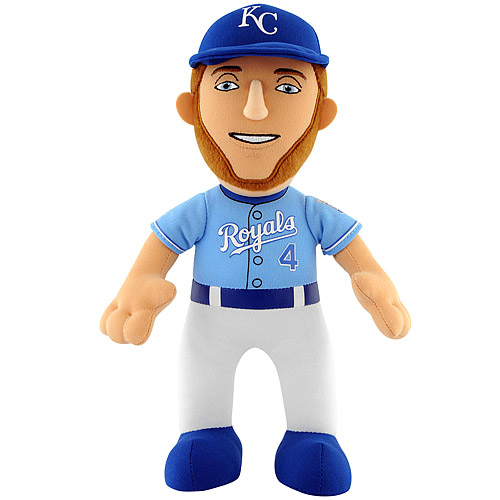 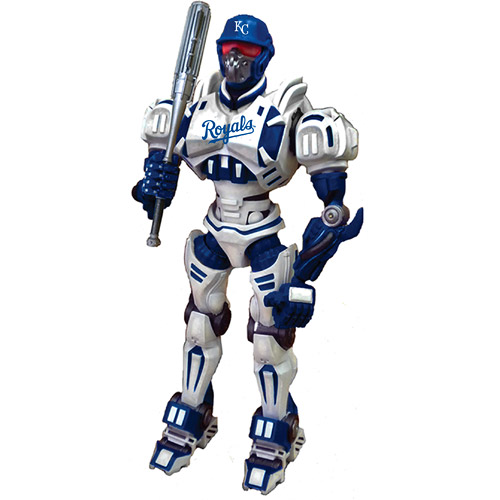 As you can see, Wade Davis was depicted much more accurately in the toy line. 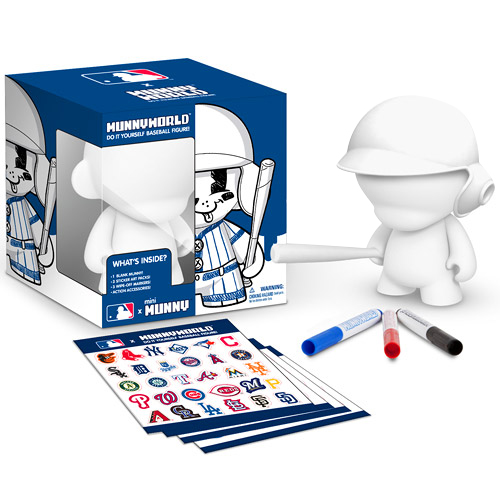