I was about a week too late in finally sitting down to hammer this catalog out, as just a few days there were a bunch of nonsensical Royals ornaments on the website; an owl, an elf painting a Royals hat blue, a generic trophy for a "Royals Fan" that looked like the profile of a pissed-off Minion, and a very poorly conceptualized Royals Santa holding a Royals banner with a single baseball just dangling below on a chain for no other apparent reason than to make you do a double take and say "...eww." It's like my IP address is flagged by the marketing department now and they grab an intern to kill the links of the most egregious items. You can kill the link, theoretical Royals Online Store intern, but they're still documented right there in my throwaway joke introduction.

So I guess I'll have to work a little harder now to find some items of note to include in this, the Holiday Shopping Extravaganza of the Official Online Store of the Kansas City Royals. But thankfully not too hard. 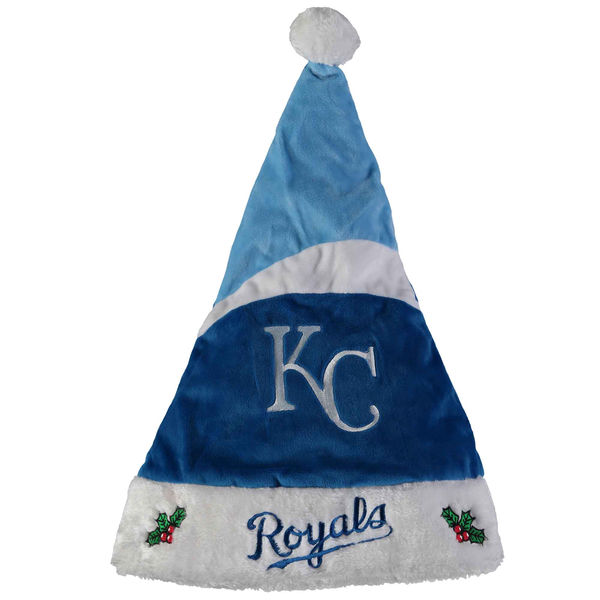 Well here we go, let's start this off right. Genuine Royals-themed Christmas attire, for those of you who are obligated to spread good tidings of comfort and joy at family gatherings and office Christmas parties, but want to make it abundantly clear you'd rather be talking about the implications of the new collective bargaining agreement because there is no offseason to you, Royals superfan, and you're not going to let the birth of Jesus get in the way of that.

I suppose this could also be a relic of a parallel universe, one where David Glass is currently sipping eggnog and summoning Dayton Moore to his office while humming Good King Wenceslas, whereupon he places this atop his dome and cheerily announces "Dayton my boy, we have one year left of contention with this fabulous group of men you've assembled, here's a blank check to make it count." Seeing as how my consciousness exists in this universe, that possibility does not however make me more likely to buy one. 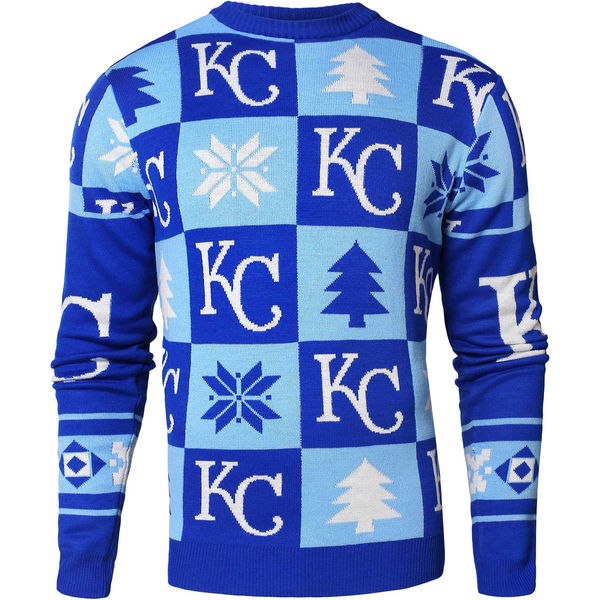 I suppose the third argument for a Royals Santa hat is that it would pair well with an "ugly" sweater for an ugly sweater party. Now I'm willing to concede that I surrendered any sense of style I had once I became a parent and am probably not the best judge of this sort of thing, but this sweater seems a little too nice to be relegated to once-a-year theme party duty. Isn't the point of an ugly sweater party to cast aside pretentiousness by wearing something holiday-themed that only kindergarten teachers wear on the regular? Maybe I'm being overly judgmental, but there are very few situations where you could wear this and not look like an asshole - and I say this as a Royals fan living in Minneapolis who gets disproportionately excited whenever I see someone wearing a KC hat in the Cities. 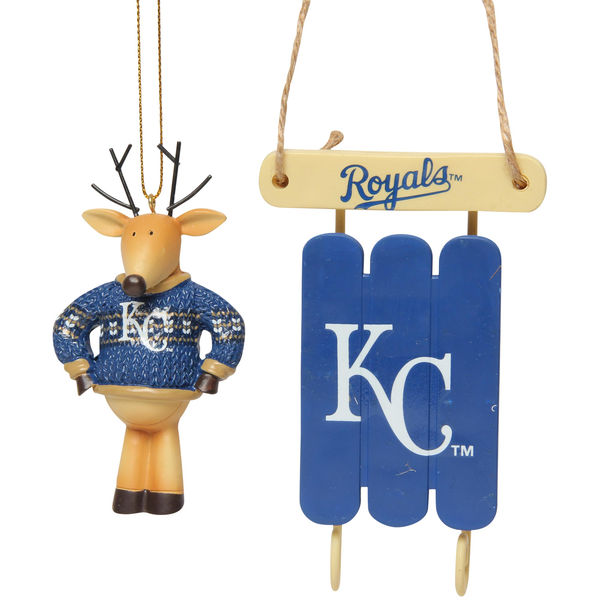 As I mentioned earlier, the amount of Royals-themed ornaments went from a number that would have threatened to give an Overland Park grandma a stroke in making a decision on one, all the way down to this little number. Ugly sweaters have become so mainstream that they're now what reindeer ornaments wear. Let that sink in. 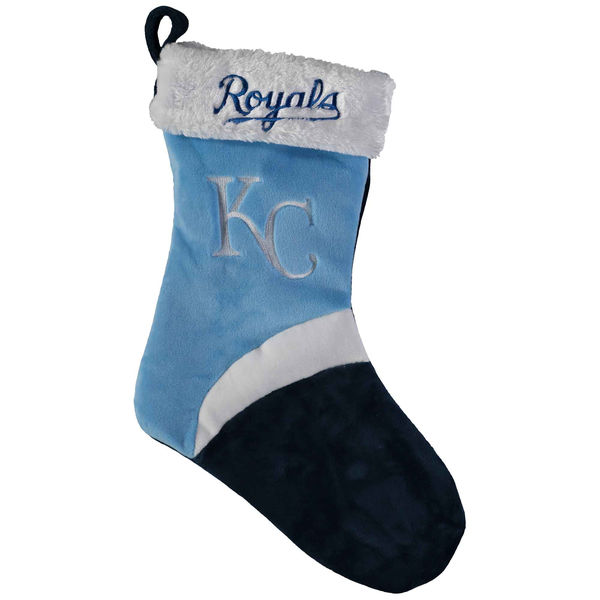 This... Well, this actually seems acceptable. I mean any concept of design seemed like an afterthought in rushing this thing through production, but I suppose if you really must mix Royals fandom with holiday decorations, a stocking would be just subtle enough to pull it off. Stick with the stocking. 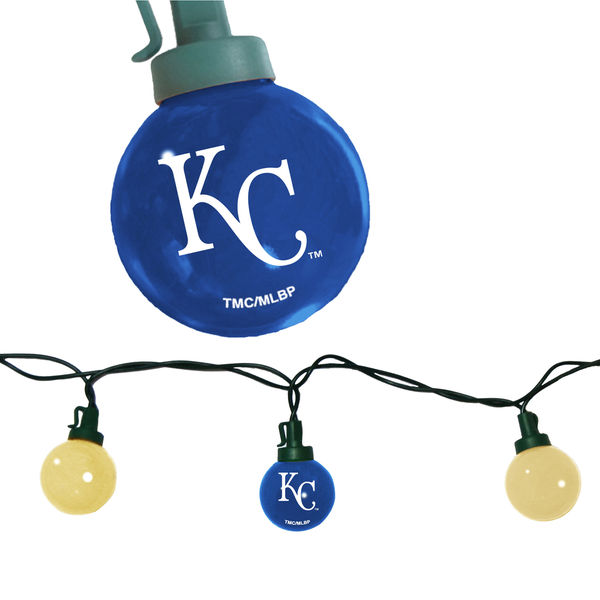 I said STICK WITH THE STOCKING! 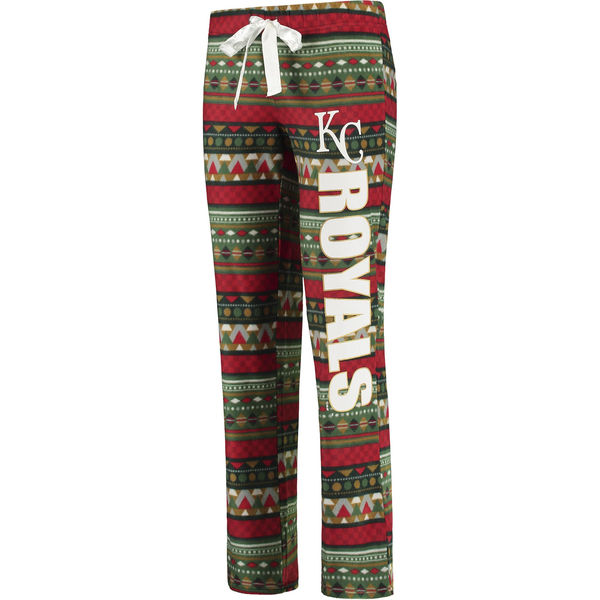 Well here's an example of holiday Royals attire done right; comfy, topical, and not-intended to ever be worn in public. We're in agreement on that, right? RIGHT? Good. The pair my wife obsesses over and refuses to throw out have all of the functionality of a skirt with none of the modesty, so this seems like an actual gift possibility! After all, I get a pair of sleep pants every year and they're almost always one of my favorite gifts, I could totally go for a Royals pair. If you feel the same way though... 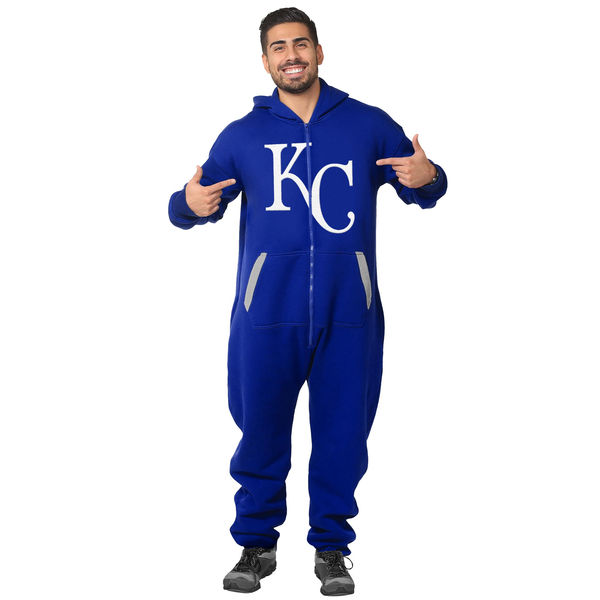 ...you'll unfortunately need to specify that you mean SLEEP PANTS and not GIANT MAN-BABY SLEEPSUIT. I'm 90% certain that this guy isn't even cheesing for the camera in the photo; you just automatically walk around with finger guns pointing at things that please you. 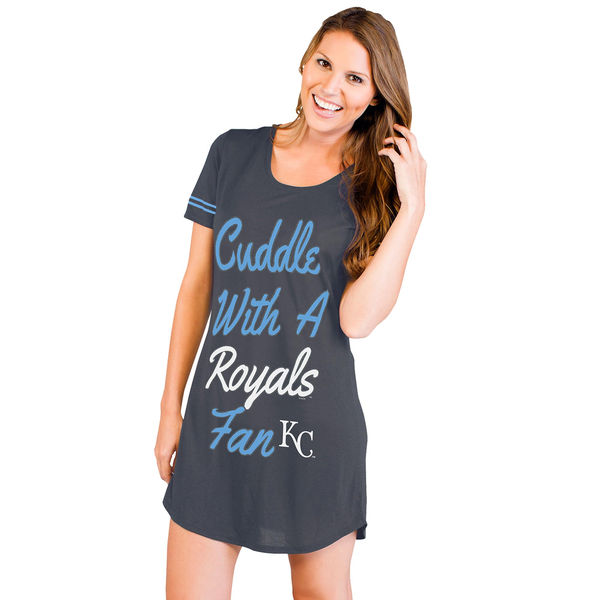 Mostly just posting this here as mental eye-wash for the previous sleepwear photo, but it might be a good gift for that Instagram-obsessed 30-something sister-in-law that is severely single on account of insisting that any potential soul-mate has to be hand-delivered to her in a serendipitous moment like in a Hallmark movie rather than just trying online dating like everyone else. I mean if you have someone like that in your family, not saying I do. 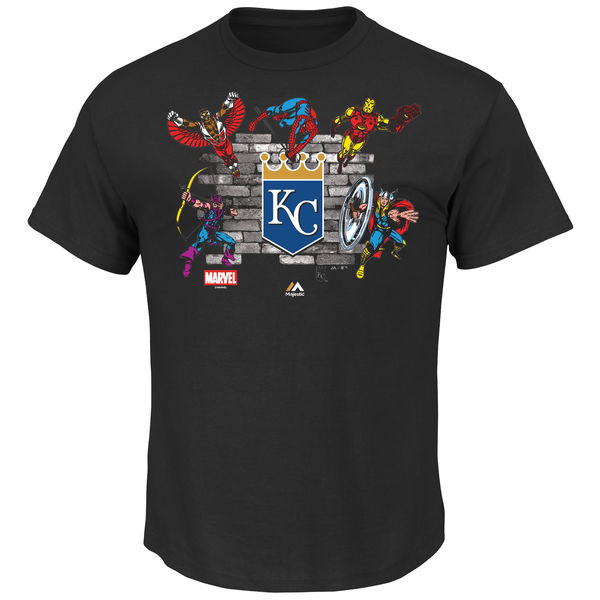 Just in case you're looking for something that's still Royals related but on the polar-opposite end of the sexy spectrum. 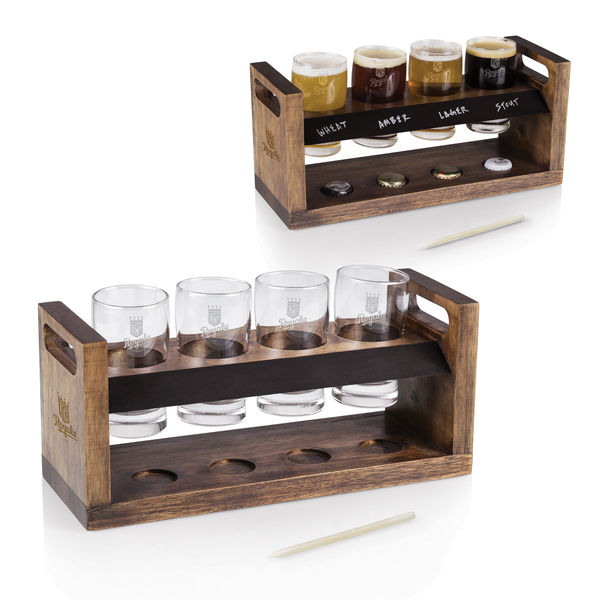 So let's move on to some things that might make sense as gifts. Do I want this Royals flight glass thing? Yes I do. Does it make any sense for me to want it? Not in the slightest. 4 oz. glasses mean you'd reasonably want to buy 3 sets of these to divide a 12 oz. bottle between, right? So now you're really having to buy in at $210 for 12 flight glasses with a Royals theme, when any reasonable person knows that the math for social-drinking and watching a game with friends should be reduced down to 1 person = 6 pack. Still too much math? Ok, the truth is beer flights really only exist as a way to get under-the-radar drunk in an acceptable way at craft breweries, since a flight still counts as 1 beer to the majority of fun-police significant others. Then you can make the determination of what the best-tasting beer with the highest ABV is and catch the biggest buzz you can within a socially-acceptable 3 beer limit. So while I'll give the Royals store kudos for having something that looks aesthetically pleasing, it's likely to get about as much use as that Sharper Image electric wine bottle opener or stainless steel whiskey cubes and take up twice the amount of counter space. No, if you want something both Royals and booze-related... 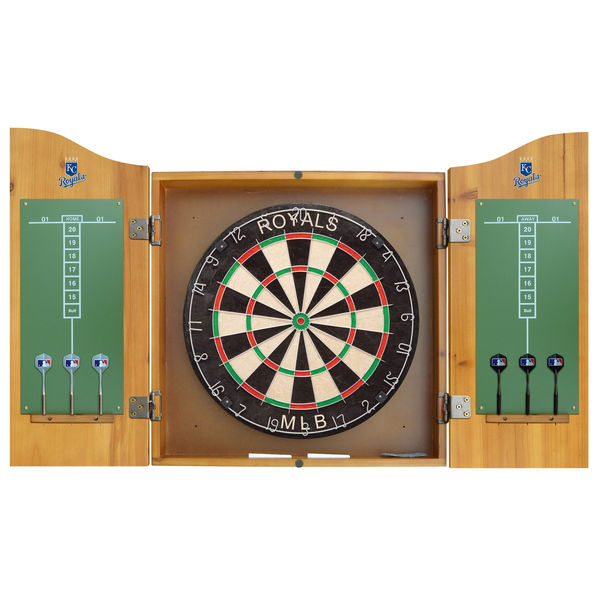 ...this is pretty good, right? Royals-themed bar benefits for the home with not a hint of the beer snobbery of flight glasses. Steel darts are also a plus as they enable one to much more adequately express one's frustrations at a high-leverage Soria appearance than one could with those sissy nylon soft tip darts. You're not a true Royals fan if you're not actively depreciating the value of your home from April-October. 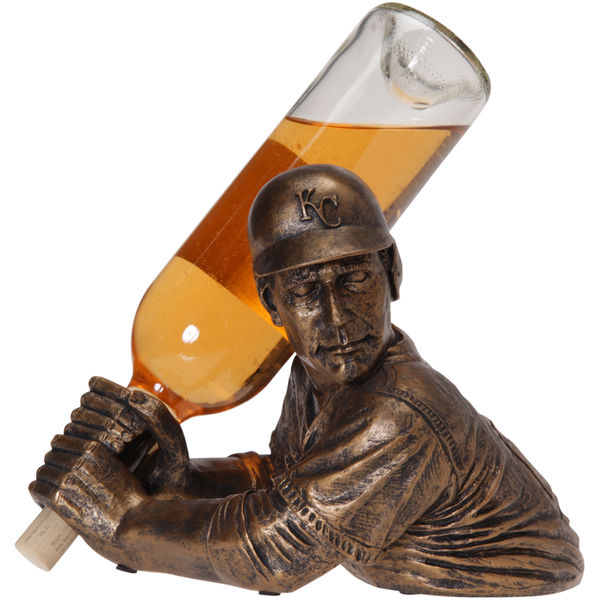 You just have to appreciate that a marketing department working within such a specific niche that they named their company "BamVino" actually decided "Yeah, I doubt Royals fans drink vino, put a half-drunk bottle of whiskey in there for our stock photo." That's just knowing and appreciating your client base. 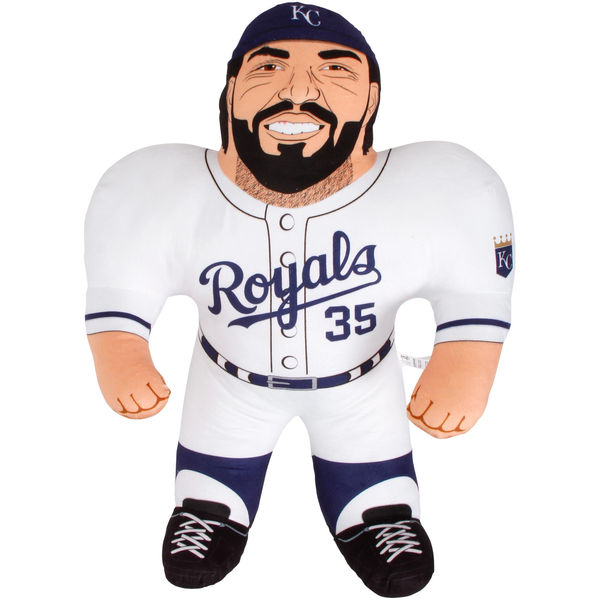 Looks like the Macho Man Randy Savage Pillow Buddy I had in the late 80's. Simply horrifying. 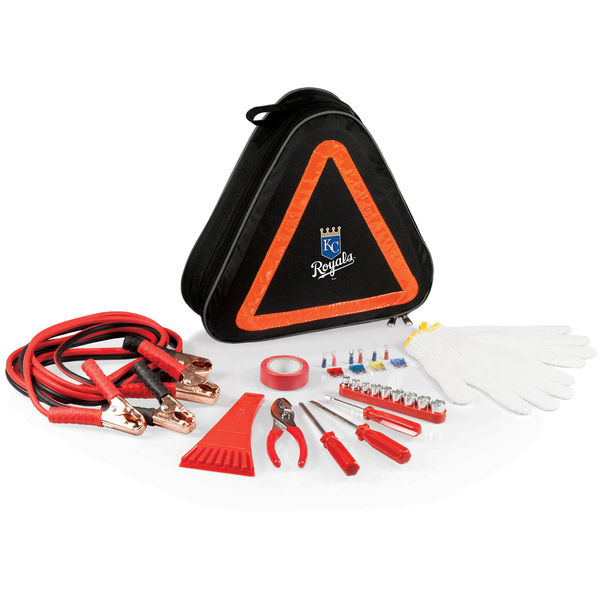 In the seven years that I've known my wife, my father-in-law has given me two presents directly from him to me. One was a folding multi-tool (which I keep in my truck and does occasionally come in handy) and one was a digital multimeter (which is still in its original packaging). For those that don't know what a digital multimeter is, you use it to check voltage on electronic wiring. I guess. When I had to borrow his van, I was made to sit through a twenty minute walkthrough of where he had hidden the various components of the spare key in case an emergency situation arose. It's a two-part key fob, so the valet portion (i.e. the manual key portion) is hidden in a magnetic box on top of the front bumper, which would allow you to reach the fob portion of the key by unlocking the trunk gate which gives you access to the wheel well where the fob is hidden, whereupon you can then combine the two portions of the key to forge the Biggoron Sword and finally beat the shit out of the Twinrova Sisters in Ocarina of Time (I think). He also occasionally tries to talk baseball to me because we clearly have a tough time relating to each other. Anyway, the point of all of that is that this product had to be specifically designed for a person like him to give to a person like me so that the world's smallest sliver of a Venn diagram intersection can make for brief bonding time during a Christmas exchange. And even I barely see the point of a Royals-branded emergency car kit. 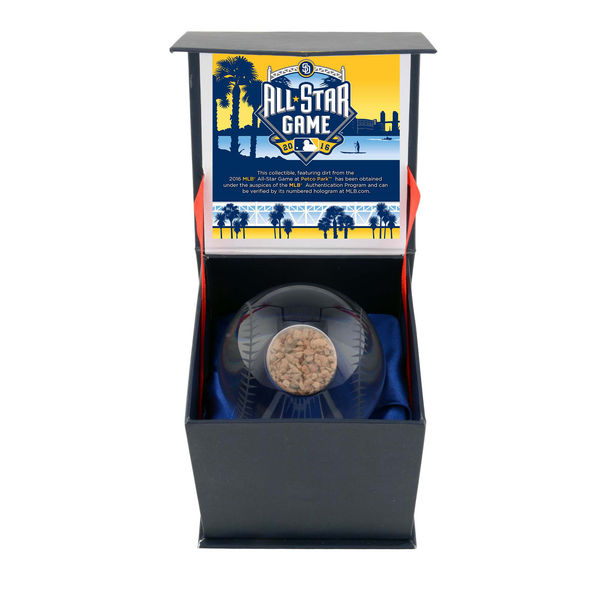 So now that I've completely outed myself as a really big dork with a Zelda reference, I'm just going to throw this out there and tell you that the immediate thought that came to my mind when I saw it was "I bet Lee Judge thinks this thing is a Palantir. I bet he tries to communicate with Rusty Kuntz's all-seeing evil mane wreathed in flame with it." 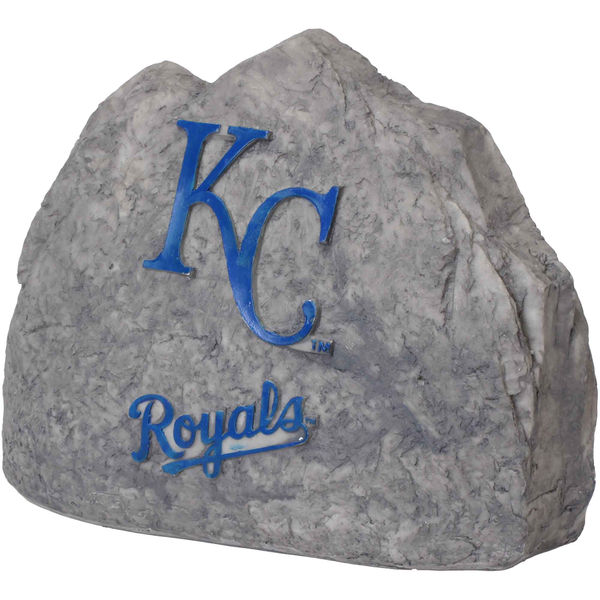 If there was one thing that was universally praised by the commentariat here over the years of delving into the Royals Online Store, it was the garden gnomes. So how does 2016 reward us? By replacing garden gnomes with a fake garden rock. Of course it did. 2016 gonna 2016. 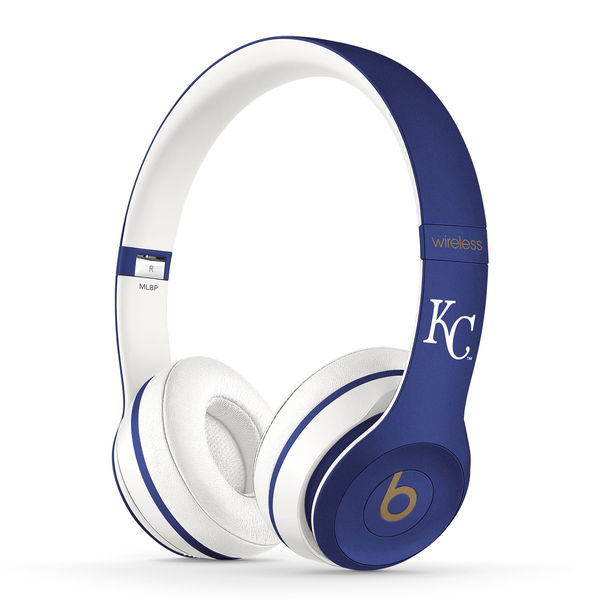 I have to put these here, though probably not for the reason you'd guess... If you want to spend $330 on a pair of headphones, that's your prerogative. Nope, these are here solely to offer some perspective, because... 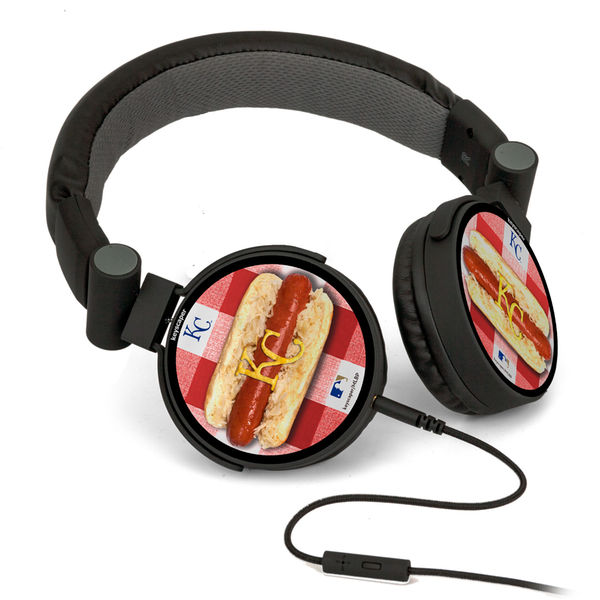 ...these things exist. I'm honestly too stunned to try to make a joke here. Somewhere out there, there's a guy driving a new-ish V6 Camaro who basically decided he was going to combine all of the retrospectively offensive parts of the first 30 minutes of There's Something About Mary and turn it into something he was going to make a modest sum with. "Headphones? Check. Wiener? Check. Intellectually-disabled people? I sure hope that's a check, someone has to buy this piece of crap." On the plus side, if you've ever wondered what the KC logo would look like if made out of dijon mustard, wonder no longer. 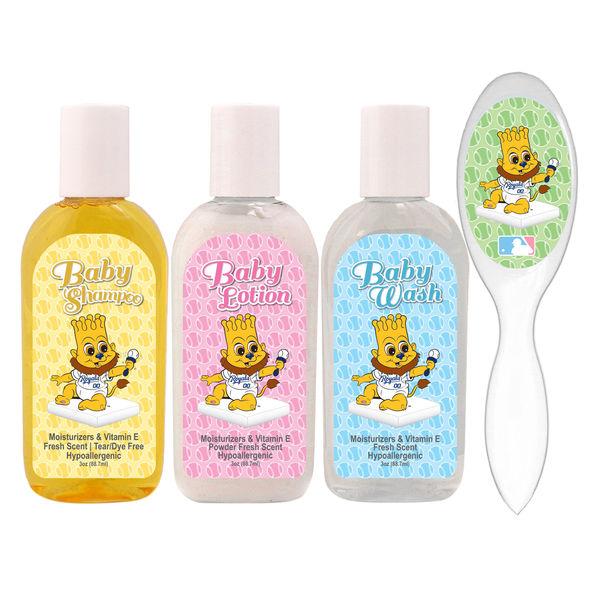 Baby Slugger lives. But please don't put this stuff on any infant children.

Wishing all of you a happy holiday season in whatever manner you see fit to celebrate it!