Ten Royals prospects under the radar

In a thin system, these guys could rise quickly.

Share All sharing options for: Ten Royals prospects under the radar

The Royals farm system has taken a beating, between last year's trades for Johnny Cueto and Ben Zobrist, some poor drafts, and injuries. While some may rank the farm system near the bottom of baseball now, it may still be able to provide some underrated gems. After all, valuable Royals players like Salvador Perez, Lorenzo Cain, and Kelvin Herrera were never ranked as Top 100 prospects, yet have become solid Major League contributors.

Who could be the next underrated prospect to rise through the system and produce? Here are a few possibilities:

The Colombian catcher will probably begin getting some attention now after he has destroyed the Pioneer League with a line of .387/.444/.653 in 44 games. He received a hefty $460,000 bonus back in 2014, and after two disappointing seasons he has finally clicked this year at age 19. He has cited his success to swinging at more pitches, but he has maintained a decent walk (7.7%) and strikeout rate (12.8%) this year.

Viloria is hitting for power with six home runs, although the Pioneer League is a hitter-friendly environment. I have not read many reports on his defense, but he has been noted for having a "prototypical catcher's body" with good receiving and blocking skills. He has thrown out 34% of would-be base-stealers, an above-average rate.

I’ve been a Viloria fan since seeing him in Rookie-level Burlington in 2014. If that doesn’t make me the conductor on the Viloria hype train I’m at least shoveling coal into the furnace. I’m working up a feature for next week on him. He’s a really impressive hitter and a very high-energy catcher with the work ethic to go with the tools.

Junis was a 29th round pick in 2011 out of Rock Falls High School in northern Illinois, bypassing North Carolina State for a $675,000 bonus. The right-handed pitcher had disastrous numbers in 2013 with Idaho Falls, giving up 59 runs in 59 2/3 innings, but his strikeout and walk numbers were good and he rebounded well in 2014. This year, at age 23, he had a 3.39 ERA for AA Northwest Arkansas with 117 strikeouts in 119 innings and just 2.0 walks per-nine-innings before a recent promotion to AAA Omaha.

Junis has a fastball that sits in the low-90s with a curveball and change up. He has always shown good command, and with his spike in strikeout rate this season, he could have a future in the Royals rotation, most likely as a back-of-the rotation starting pitcher.

By the numbers, Skoglund has been pretty much a left-handed version of Junis, matching his numbers at each level. He is a month younger than Junis, although he was drafted out of the University of Central Florida in 2014. Skoglund has put up a solid season at AA Northwest Arkansas with a 3.41 ERA in 24 starts, although his 7.5 strikeouts-per-nine innings are not as impressive as Junis' whiff rate this year.

Skoglund stands at 6'7'' and throws in the low 90s with below-average secondary offerings, suggesting his future may be as a reliever. He is more of a finesse pitcher, and MLB.com likes his easy, repeatable delivery, so it is not unthinkable that he could crack a rotation as a crafty lefty if he refines his curveball and change up.

Matias signed for a whopping $2.25 million out of the Dominican Republic back in 2015. He was signed as a five-tool outfielder, with speed enough to play center field, but a strong arm as well. Still just 17 years old, the right-handed hitter has flashed plus power in the Arizona Summer League. Facing pitchers several years older than him, Matias has slammed eight home runs in 41 games with a line of .239/.337/.477. His plate discipline needs a lot of refinement, however, as he has struck out 38% of the time.

According to MLB.com, club officials think Matias has the quickest bat in the system and crushes balls in batting practice, but his aggressive approach may hurt him at higher levels. Matias is a long way from the big leagues but has some of the highest upside out of anyone in the organization.

Lee was a third-round pick in this year's draft out of a Washington D.C.-area suburb. Many thought that he would be drafted as a pitcher, with his ability to throw in the low 90s, but the Royals took a chance on him as an outfielder. He has plus speed, with the ability to play centerfield, and obviously he has a strong arm as well. He is off to a fantastic start in the Arizona Summer League, hitting .277/.417/.497 with six home runs. He has showed tremendous plate discipline, rare for a high school draftee, drawing 33 walks in 44 games, although he has also struck out 50 times.

There are a number of other 2016 draft picks off to great starts - shortstop Nicky Lopez, first baseman Chris DeVito, pitcher Grant Gavin, and outfielder Kort Peterson - but Lee has the highest upside. 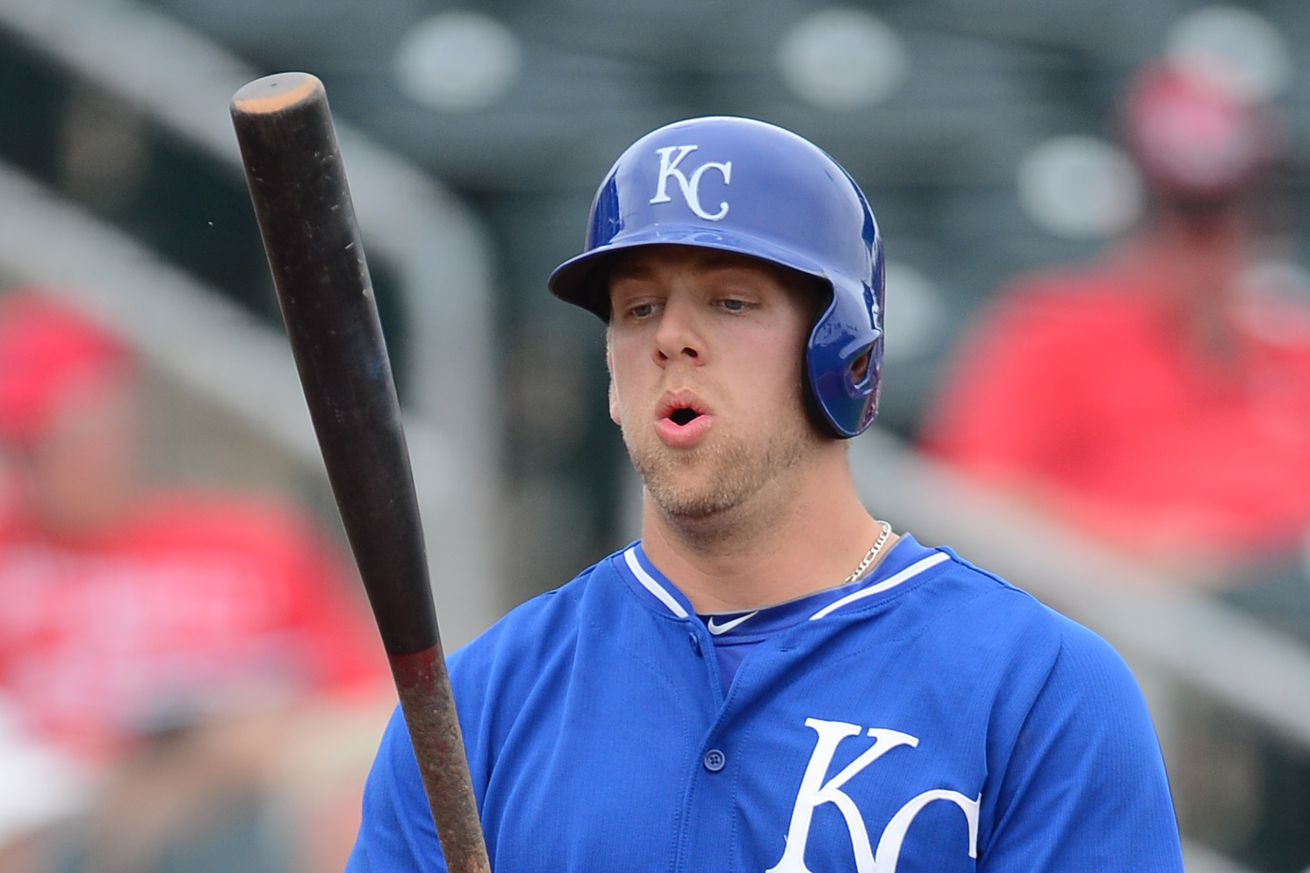 Royals fans could see the hard-throwing Edwards in a few weeks as a September callup, after he was named a AAA All-Star for his performance in Omaha. The right-hander from Western Kentucky University had a poor outing this week, giving up five runs that ballooned his ERA to 3.83 for the year, but he has 68 strikeouts in 56 1/3 innings. Edwards can throw in the high 90s, but has command issues, walking 4.7 hitters-per-nine-innings this year across both levels.

The former 19th round pick has a pretty big split, getting hammered by lefties, although he did not have a split last year. Edwards fared well in limited action in the Arizona Fall League last year. At age 24, he could compete for a bullpen role in Kansas City next spring.

Castillo seems to be way off the radar, but with the numbers he is putting up, he may start to garner notice soon. He was signed as a 20-year old out of Mexico, and was named Royals Pitcher of the Year for their Dominican Summer League team last year and Applachian League Pitcher of the Year this year. He posted a 3.19 ERA in ten starts with 64 strikeouts and just 10 walks in 62 innings for Burlington in low Rookie ball. Castillo is so far under the radar I cannot find much of anything as far as scouting reports or video, but as a lefty, he could be a quick riser, particularly if he continues to strike hitters out.

Duenez was given a $425,000 bonus out of Venezuela, but through his first three professional seasons, it looked like that was a poor investment. Duenez struggled mightily, although he was much younger than much of his opposition. This year, at age 20, Duenez has begun to reach his potential with a strong season in both Low A and High A ball.

The left-handed first baseman actually improved his numbers once he was promoted to Wilmington, one of the toughest parks for a hitter. Overall, he is hitting .285/.335/.446 with 13 HR 91 RBI in 124 games across Lexington and Wilmington. Duenez does not strike out much and has surprising speed for a corner position, swiping 24 bases. He has played some left field, although first base is where he spends most of his time.

Toups has become a bit of a darling in some corners, and while I am not as high on him as others are, he has impressed with his numbers and could force his way onto a big league roster before too long. A former teammate of minor league first baseman Ryan O'Hearn at Sam Houston State, Toups is a second baseman who doesn't seem to excel in any area of the game, but does everything well. In 114 games across High A and AA ball this year, he is hitting .274/.360/.447 with 10 HR 46 RBI. The 23-year old has played both middle infield positions, but projects to be more of a second baseman going forward due to a below-average arm.

Toups is a good baserunner, stealing 58 bases in the minors at a success rate of 86.5%. He has a high walk rate of 11.5% in his career, suggesting he could be an effective top-of-the-order hitter someday. He has decent gap power, and while he won't hit a lot of home runs, he is still a threat to put one out of the ballpark at times. Toups projects to be more of a utility infielder, but his bat may allow him to push his way into a starting role.

The right-hander does not have eye-popping numbers throughout his career, but has held his own despite being fairly young at each level. He signed for just $45,000 out of the Dominican Republic, but has steadily made progress through the system. Now just 22, he has a 4.03 ERA in 29 innings for AA Northwest Arkansas after putting up a 2.14 ERA in six starts for High A Wilmington. He has struck out nearly a hitter-per-inning in his career without terrible walk numbers. Fernandez has struggled with his breaking ball at times, and could profile more as a reliever.

Ricky Aracena - He will draw comparisons to Jose Altuve with his diminutive proportions, but he hasn't hit like Altuve yet. He was signed for $850,000 out of the Dominican Republic, and the shortstop shows good speed.

Xavier Fernandez - The 21-year old Puerto Rican catcher (no relation to Pedro) has hit at nearly every level, walking at a very good rate without striking out much.

Travis Maezes - The 2015 draft pick out of Michigan has shown good power at third base, but is hitting just .214 with a 36% strikeout rate.

Daniel Stumpf - He was taken by the Phillies as a Rule 5 pick but recently returned. While he didn't succeed with Philadelphia, he might be a lefty reliever for the Royals next year.

Yeison Melo - The right-handed hitting outfielder is hitting .335 for Idaho Falls. The Dominican is 20 years old, and does not show plus tools in other areas, so it may be fluky.