Is Milwaukee the team you forget the most when trying to name all NL teams?

For me, Milwaukee is definitely the team I forget the most when trying to name NL teams and then I have to go back and do it by division. It’s probably because they were in the AL for so long. Houston would probably be the same way for me in the AL if I didn’t live there. Then again, beyond Ryan Braun, how many Milwaukee Brewers can you name? Keeping in mind, these two teams played a couple of weeks ago, so you can’t even use that as your excuse.

That said, they’ve had a lot of turnover and haven’t been in the spotlight for a while. The last time they were on the national stage, it was with ace Zack Greinke (yes, that really happened) and a lineup featuring Braun, Prince Fielder, Rickie Weeks, Corey Hart, Carlos Gomez, and, yes, Yuniesky Betancourt. They were trying for their first World Series title much like the Texas Rangers were that year. Of course, they lost to St. Louis in the 2011 NLCS because Cardinals fans ruin everything.

Much has changed since then. Last year, 1B Chris Carter led the NL with 41 home runs (tied with Nolan Arenado)! Well, he got non-tendered and signed with the Yankees. The story is a kind of cool, though, as he was replaced by Eric Thames. If you were thinking “Eric Thames?!? The former Blue Jays and Mariners OF”, we welcome fans of Toronto and Seattle and the Thames family to our site. But he’s more notable for destroying KBO pitching for the last three years and being a bit of an experiment to see if another Korean league player can translate that success back to the MLB. Closer, former Royal, and medicinal marijuana user Jeremy Jeffress? Traded to Texas at the trade deadline. Tyler Thornberg, fantasy saves vulture after that? Traded to Boston for prospects in the offseason. Former Royal and “looks nothing like The French Prince” Will Smith? Dealt to San Francisco at the trade deadline.

Catchers Jonathan Lucroy and his backup Martin Maldonado (I know you didn’t know that second one! Stop pretending! You’re just cribbing notes off the same season preview from Brew Crew Ball that I’m stealing notes from)? Also traded. Did you know that Johathan Villar (62), Hernan Perez (34), and Keon Broxton (23) were not names I made up but actual players who combined for almost as many stolen bases as the Royals had as a team last year (119 vs 121)? How about Ben Sheets? Robin Yount? Paul Molitor? Stop that! Now you’re not even trying.

Their Opening Day starter is Junior Guerra. He pitched in 3 relief outings for the White Sox and threw 121 IP for the Brewers last year. That's his total MLB experience. At 32 years old. The only other starter who has locked down a rotation spot is Zach "no I am not Kyle Hiram" Davies. Every other rotation spot is up for grabs. Among the candidates is Saturday’s starter Wily “I’m not Joel” Peralta.

Take a long look and try to commit some names to memory as the two teams don’t play again and this question might show up in next year’s Spring Training game thread (or World Series preview!)

Here’s another attempt at my quick glance table:

And here is the lineups: 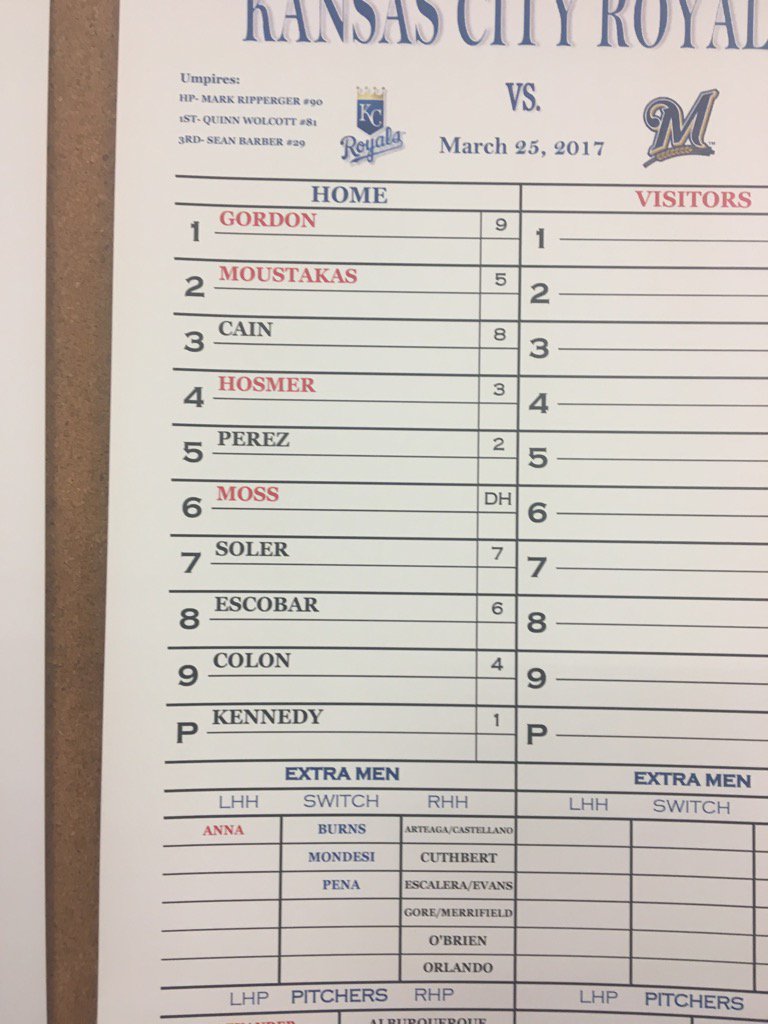 The rotation will set up Duffy, Kennedy, Hammel, Vargas, Karns.

Duffy will come back on regular rest on Saturday during first week. Karns will start Sunday; Kennedy in the home opener on Monday, April 10.

Unfortunately, I’ll be driving during a lot of the game today. Don’t get too rowdy.