The first part of the story is easy to imagine: the Royals continue to lose 2 out of every 3 games for most of the rest of the month, until they are 15-30. The Kansas City Star places on the front page of the sports section a tombstone, declaring the season to be dead, with a headline something like, "There are 111 games left in the season, but the Royals might as well be thinking about next year."

The next part is harder to imagine: then the Royals get hot. They are .500 by the All-Star break and in contention for the Wild Card by the end of July. They win a playoff spot and ride that wave all the way to the World Series, making fools of the sportswriters and fans who counted them out in May.

This is, of course, the exact story of the 2005 Astros, and this was the infamous sports page from the Houston Chronicle: 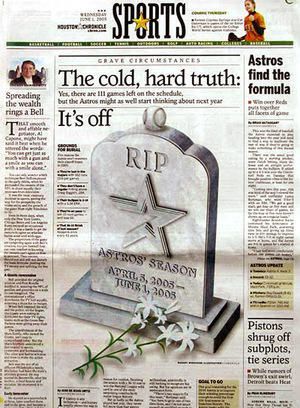 Now the fact that a team has done something in the past obviously does not give much hope for any one team. Nearly all 15-30 teams go on to have miserable seasons. But here are some similarities that might give Royals fans some hope:

Team has demonstrated both championship ability and tendency to be streaky

The 2004 Astros were an even bigger comeback story. They were 55-61 in August but finished the season 36-10 to grab a Wild Card spot and take the 100-win Cardinals to game 7 in the NLCS. The Royals have been incredibly streaky in their contending years (2013 forward), with the exception (really) of 2015, when they were pretty consistently excellent.

The 2004 Astros were an offensive juggernaut, featuring great players 1-5, a good #6, and two black holes. They lost Carlos Beltran and Jeff Kent as free agents and Jeff Bagwell finally succumbed to his shoulder deterioration at the exact time that Lance Berkman returned from an offseason knee injury. They replaced Beltran, Kent, and Bagwell with a combination of Jason Lane, Chris Burke, Mike Lamb, and Willy Taveras. The lineup featured black holes in Brad Ausmus, Adam Everett, and Taveras.

The Royals have black holes in the lineup, too. They also lost a big bat in the offseason and are trying to find their offensive footing. The difference here, of course, is that the Royals do not have anyone like Lance Berkman anchoring the lineup and they need someone (maybe Moustakas) to do like 2005 Morgan Ensberg and emerge as a candidate for MVP votes. However, they also have the potential for a more balanced lineup, if veterans start round back into form.

The Royals have, by the numbers so far this year, one of the best starting rotations in baseball. The Astros featured three great pitchers, Roger Clemens, Andy Pettitte, and Roy Oswalt, all at peak or near-peak performance. Danny Duffy, Ian Kennedy, and Jason Vargas are not those three guys by any stretch. But the Astros had a dumpster-fire at the 5-spot in rookie Wandy Rodriguez and Ezequiel Astacio, and a mediocre Brandon Backe as their #4. It is possible that Nate Karns and Jason Hammel can outperform the back end of the Astros rotation enough to make the unit as a whole somewhat comparable.

A "three-headed monster" bullpen down to one "monster"

In 2003, Billy Wagner, Octavio Dotel, and Brad Lidge were a fierce combination that shortened the games for the Astros. Wagner was traded in the offseason, and Dotel was traded in 2004 to acquire Beltran. Lidge was the only reliable bullpen arm left. When veteran Dan Miceli proved to be an unreliable set-up man, they turned to a waiver-wire pickup from the Mets (Dan Wheeler) and a non-prospect minor-league starter (Chad Qualls) as their main set-up guys. They were unproven, to say the least, going into 2005.

The comparison to the Royals is obvious here, as they've gone down from HDH to just Kelvin Herrera. Soria was a huge question-mark coming into the season, and Strahm was no more proven than Qualls was. Wheeler and Qualls turned out to be very good set-up guys to Lidge, who had a great year as well.

On May 27, 2005, the Astros were shut out by Doug Davis, 3-0, despite a 6-inning, one-run performance by Roy Oswalt. Chad Qualls gave up two runs in relief, ballooning his ERA to 6.46. Lance Berkman was hitting .206. Jeff Bagwell was out for the season. Jason Lane was hitting .222 (and was pinch-hit for by Orlando Palmeiro). They were averaging just 3.47 runs per game in the middle of a high-offense era.

The rest of the story

The Astros would win 28 out of their next 40 to reach 44-43 going into the All-Star break. They were swept by the Cardinals coming out of the break but would go over .500 for good on July 19 and were leading the Wild Card by t e end of July. They never challenged the Cardinals for the division but overcame a losing August to finish 89-73, besting the Phillies by one game for the last playoff spot. They beat the Braves and Cardinals in the playoffs before being swept by the White Sox in the World Series. 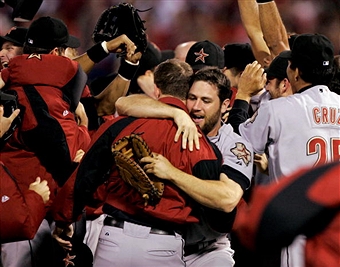 The way the Astros came back that year is exactly how this team has to do it to avoid being sold off piece by piece. They were in Wild Card position by the trade deadline, despite an even more prolonged dismal start.

The main difference between these teams is that the Astros had great players: a Hall-of-Famer at 2B (though in decline), a HOF-caliber hitter in Berkman, the greatest pitcher of all time in Clemens, in addition to Pettitte (who might be in the Hall of Fame some day) and Oswalt (who was close to that path before his back went out). The Royals don't have anyone who will sniff the Hall of Fame. The idea of the Royals is that they are greater than the sum of their parts.

Escobar is no better than Everett at the plate, but if Moose can come close to an Ensberg-like performance (36 HR, 144 OPS+), then maybe the rest of the lineup could play closer to their hoped-for levels and we won't have Ausmus/Taveras-like holes in the lineup to overcome.

The Royals rotation is not nearly as good at the top, but it should not be as top-heavy, either. Hammel and Karns should be able to outperform Backe and the combination of Ezequiel Astacio and Wandy 1.0, making up some of the difference. And Joakim Soria already looks like he might be back to being a really good complement to Herrera, and if one more bullpen piece emerges, they will have a solid back-end like the Astros did.

None of this is terribly likely, of course, but if you are trying to imagine a scenario where the Royals make this season interesting, it probably will look a little like what the Astros did 12 years ago.