Glass half empty or half full?

As the Royals have just settled into a pattern of muddling around, I really not sure where to go with this game thread.

The Royals longest homestands this season are 10 games and one of them is almost over. They dropped the first two to the Twins, sandwiched around a rainout. Since then, they’ve gone W-L-W-L-W. A pair of wins today and Sunday would give them a winning homestand.

It would also put them within 3 games of Cleveland, who is currently in a jumble near the top of the AL Central standings. The slightly surprising Twins are a half game ahead of them at 15-12 but the Tigers, White Sox, and Indians are all a pedestrian 15-13. For as awful as the Royals have been to start this season, two wins puts them only 3 games back of the likely eventual AL Central leader, even at with a messy 12-18 record.

Tomorrow, they’ll go for their first series victory since that sweep of the Angels back on Easter Sunday. Jason Vargas (4-1, 1.42 ERA) will oppose Josh Tomlin (2-3, 8.87), so the matchup would appear promising.

Eric Hosmer's quiet little 9-game hitting streak got loud last night as he added a double and a long home run. During the streak, his average has gone from .195 to .271 while his OPS is up to .711 from .500.

Unfortunately, the team is still a laughably bad 10-18, a half game ahead of the horribly disappointing Blue Jays for worst record in the AL.

The offense is still historically bad. They likely won’t end that way but the Royals are averaging less than 3 runs a game FOR THE SEASON. When I looked that up a couple of weeks ago in the middle of the 8 game 2 run or less streak, no team had scored less than 3 runs in a year that started with “20”. That means no team, even the ones where the pitchers bat, haven’t been this bad offensively in at least 16 years. I’m sure it goes back into the 80s or before but I gave up looking as I figured my phrase of “historically bad” is justified.

Even with Hosmer’s streak, he’s still hitting below league average. Heck, every regular not named Mike Moustakas or Lorenzo Cain has an OPS+ below 100. Three regulars are hitting below .200 still in Alcides Escobar, Alex Gordon, and Brandon Moss.

Jason Vargas's 1.2 WAR this season has already exceeded his 2016 and 2015 totals and his velocity last game was his lowest of the season. And that's in Jason Vargas velocity terms.

So, pick your glass: half full or half empty.

Jorge Soler was added to the Royals roster this morning:

We have reinstated OF @JorgeSoler12 from the 10-day DL this morning; RHP Miguel Almonte has been optioned to @nwanaturals. #Royals

And here are the lineups: 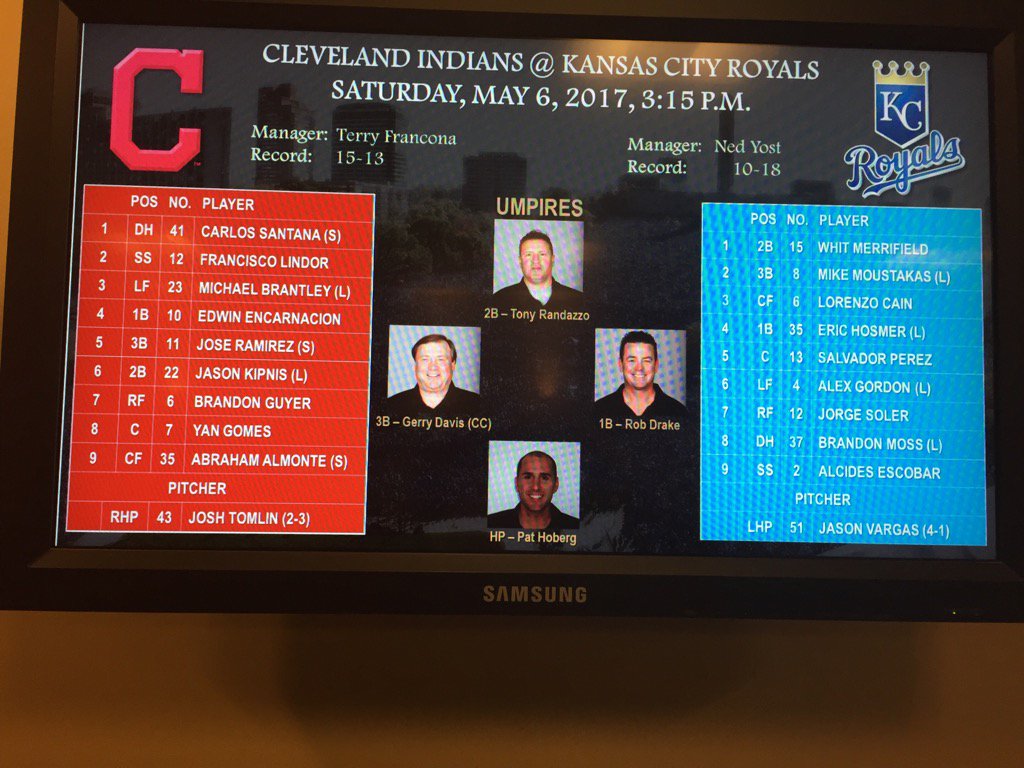 Just a reminder for those of us out of market: Game is on Fox Sports 1.