Baseball starts back up tonight with the NLCS

Share All sharing options for: Royals Rumblings - News for October 12, 2018

Clint Scoles at BPKC gets the leadoff spot on today’s Rumblings with his article comparing the pitching in the 2019 Royals farm system with 2009:

The main difference between this group and the last is the data and open mind that the front office has towards pitching development compared to what they did ten years ago.Things change quickly in a year in terms of these lists and franchises though. Little did BA or the Royals know that the best pitcher they would develop was already in the organization and not on this BA list or even the next season’s group. The next Yordano Ventura could be the #2 player chosen this year’s draft or someone I left off. That’s the fun that comes with the process.

And... that’s it. No, seriously. That’s all the Royals news for yesterday.

It’s the good ol’ offseason where Royals stores are few and far between. Below is the last story about the Royals (as of writing this yesterday afternoon):

Even the venerable Kansas City Star has not had an article since October 9th.

ESPN, CBS, Yahoo, etc - the last story from most of the national outlets was the same story from the 9th about the Royals naming kerfuffle with the Utah women’s soccer team. Before that, you might have had to go back to the last game of the season.

Just a reminder: it’s October 12th. That’s 3 plus days for the most notable Royals outlets. And if I’m missing a significant source of Royals stories, I’d love to hear it as it’s another source I can cite during Rumblings. But I’m pretty sure I covered all of them.

This isn’t just me sucking up to other Kevins. And I hope it’s not patting ourselves on the back too hard, but, looking around, it makes me grateful to work with a team that does quality content pretty much every day all year. It includes great general content by excellent writers, colorful retrospectives, in-depth statistical analysis, sharp opinion pieces, and cutting edge computer-generated content. And that’s all in the last week.*

Anyhoo, for this week’s Best of Royals Review, we’re revisiting another playoff thread. This time we’re skipping ahead to the clinching Game 3 of the 2014 ALDS. I’m just going to steal my own (edited) words and image from here:

I have a soft spot for this game as my wife and I flew up to Kansas City to watch it with friends. The K looked and sounded beautiful that night: so full of blue with the ground shaking. On the fourth pitch of the game, Mike Trout homered into the fountains off of James Shields to give the Angels their first lead of the series. But it would be their only one. In the bottom of the 1st, the Royals loaded the bases and Gordon cleared them, doubling off the wall. In the third, Eric Hosmer added a 2-run homer and Billy Butler would steal a base. I’m going to just pause here and let you catch up. 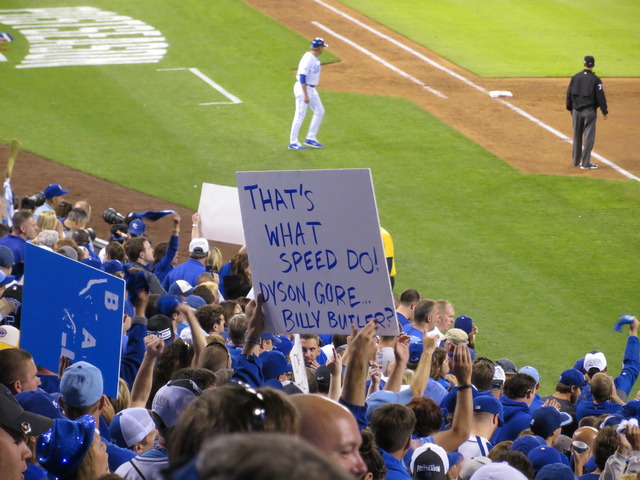 So, yeah, if Billy Butler is stealing bases, it’s not your night or your series. Pujols would homer, Moose would answer. In the 5th, Cain would make a spectacular diving catch to save a run. And then he would do it again. James Shields would get through 6 and hand the ball to HDH. Herrera would throw 101 and allay injury fears from earlier in the series. Davis would allow a run just to see what it felt like. Holland would finish his third game of the series, striking out Trout to send the Royals to Baltimore. Dyson would backflip to celebrate, rain would fall, players would run around the field high fiving fans, and the Royals, led by Hosmer, would party with fans at McFaddens in the P&L.

Here’s the game thread and the overflows.

Server upgrades, they’re a beast. They’re why this week has been frantic catchup after a huge upgrade last weekend. So we’re revisiting a previous game with a new song. A remake of Nintendo DS’s The World Ends With You lands on the Switch today so we’ll use one of the battle themes “Long Dream”: