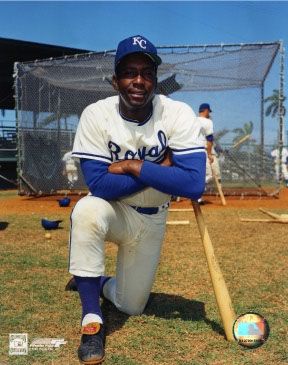 When Cedric Tallis constructed the 1969 Kansas City Royals, he chose to draft younger players that could be developed versus the Seattle Pilots, who went predominantly with older, established veterans. One of those youngsters plucked from the draft was a 25 year old named Robert Oliver.

Bob Oliver was born in Shreveport, Louisiana and raised in North Highlands, California, where he had been a baseball and basketball standout at Highlands High. He was drafted by the Pittsburgh Pirates in 1963 and had a cup of coffee with the Pirates in 1965 as a 20 year old. The Pirates traded him to the Minnesota Twins, where he spent two more seasons in their minor league system before Tallis selected him with the 19th pick in the expansion draft. Along with Lou Piniella, Oliver became the first star of the expansion Royals. Oliver was a terrific athlete who could play first and third base plus all three outfield positions. He became an immediate starter in Kansas City and batted .254 with 13 home runs and 43 RBI in 118 games during the 1969 season.

Oliver wrote himself into the Royals record book twice that initial season: for hitting the first grand slam in club history, which came on July 4, 1969 off of Seattle’s Jim Bouton, and for becoming the first Royals’ player to record six hits in one game, which he accomplished on May 4, 1969 against the California Angels. Oliver became only the 21st person in American League history to record six hits in one game. Only two other Royals have recorded six hit games since: Kevin Seitzer vs. Boston on August 2, 1987 and Joe Randa against Detroit on September 9, 2004. Jorge Orta, Johnny Damon, Alex Rios and Raul Ibanez have all recorded six hit games while playing for other teams.

Oliver got off to a slow start in 1969, getting only one hit in his first twenty three at bats before heating up in late April. On this May night, before 20,843 fans and family members and against the team that he considered his home town team, Oliver started in center field and was batting sixth. On the mound for the Angels was lefty Clyde Wright. Wright had made an impressive debut in 1966, but was struggling in 1969.

Oliver came to the plate for the first time in the second inning. Following a leadoff walk to Chuck Harrison, Oliver singled to left. Wright then walked former teammate Paul Schaal to load the bases with no outs. With Ellie Rodriguez at the plate, Oliver drifted too far off of second and Wright picked him off. Not a great start, but Oliver soon atoned himself.

In the 4th, Oliver led off with a double off of new Angels’ pitcher, Eddie Fisher, but was stranded as Schaal, Rodriguez and Roger Nelson could not advance him. The Royals broke open a tight game in the 5th, sending eight batters to the plate. Oliver delivered the biggest blow, cranking a two run home run off of Pedro Borbon, which boosted the Royals lead to 7-1.

Oliver was again the catalyst in the 7th inning, leading off the inning with a single to center off of Phil Ortega, which ignited the Royals to a six run inning and turned the game into a rout. Oliver batted twice in the inning, also delivering a two out single off of George Brunet, which plated the sixth run of the inning. The Royals sent twelve men to the plate, extending their lead to 15-1.

Kansas State football coach Bill Snyder was once asked by a reporter, "you must be proud that your team didn’t quit". "They don’t let you quit" Snyder replied in a steely voice. The Angels surely must have felt like quitting on this night. They had thrown five pitchers to the wolves to no avail. To open the 9th, the Angels trotted out their sixth pitcher, Tom Murphy and Oliver promptly spanked him with a one out single to left. When the night was over, Oliver had collected six hits off of six different pitchers, with a double and a home run, good for ten total bases, and raised his batting average from .220 to .304. The Royals pounded out 19 hits and Roger Nelson pitched a complete game four hitter.

Oliver’s best year in Kansas City was 1970, when he hit .260 with a then club record 27 home runs and 99 RBI. The Royals traded Oliver to the Angels sixteen games into the 1972 season. He ended 1972 by hitting .270 with 20 home runs and 76 RBI. He also had a solid year for California in 1973, going for .265 with 18 home runs and 89 RBI. Oliver finished his career with one year in Baltimore and one season playing for the Yankees. He ended his career as a 4.3 WAR player and will long be remembered by Royal fans as being one of their first stars.

On a side note, Oliver’s son Darren, also played in the major leagues, making his debut in 1993 with the Texas Rangers. Both father and son were one time teammates of Nolan Ryan, Bob in California from 1972-74 and Darren in his rookie season in Texas. Darren was a left handed pitcher who compiled a 118-98 record while appearing in 766 games in a twenty year major league career.

Given the success of the Oliver's, I’ve often wondered why the Royals didn’t make it a standard practice to draft the sons of former players. They got it right by drafting Brian McRae (Hal), but missed on Prince Fielder (Cecil), John Mayberry Jr. (John Sr.), Aaron and Bret Boone (Bob), Dee Gordon (Tom), and Jayson Werth (Dennis). They did acquire through trades, Brian Banister (Floyd) and Danny Tartabull (Jose – played for the Kansas City A’s). Given the pedigree and performance of these players, it seems to me to be a sound strategy to draft second generation players. The only whiff in the group would be Dusty Wathan (John), who you guessed it, was drafted by the Royals. Wathan’s career consisted of six plate appearances over three games in 2002. He did collect three hits in those at bats. Which begs the question, why wasn’t Wathan given a shot in 2003? The 2002 Royals were a dysfunctional bunch, going 62-100, under Tony Muser, John Mizerock and Tony Pena. Perhaps the losing was too much for him?