You can check out Day 1 here.

Today was gameday. We had a quick breakfast then hopped on vans to the Royals Spring Training Complex. All the coaches were drivers of the vans, so I ended up in a van with Mike Sweeney and Billy Butler. Mike joked about the scouting reports on both of them back in the day:

"What do you think of Sweeney/Butler?"

"What about his fielding skills?"

Both guys were great and entertained us with stories and answered questions throughout the whole drive.

Upon arrival we were introduced to the clubhouse, and shown to our lockers. We get to stay in the Major League Clubhouse, so my locker is one that will be emptied out at the end of this week and then a real Royals player will take its place. Dina Blevins and the staff go to great lengths to give us as much of an authentic experience as possible, so our entire uniforms and caps are all made of the exact same stuff they give to the players. When you walk up to your locker for the first time and see your nameplate at the top and a home and away jersey with your name on the back, it's a pretty surreal feeling. 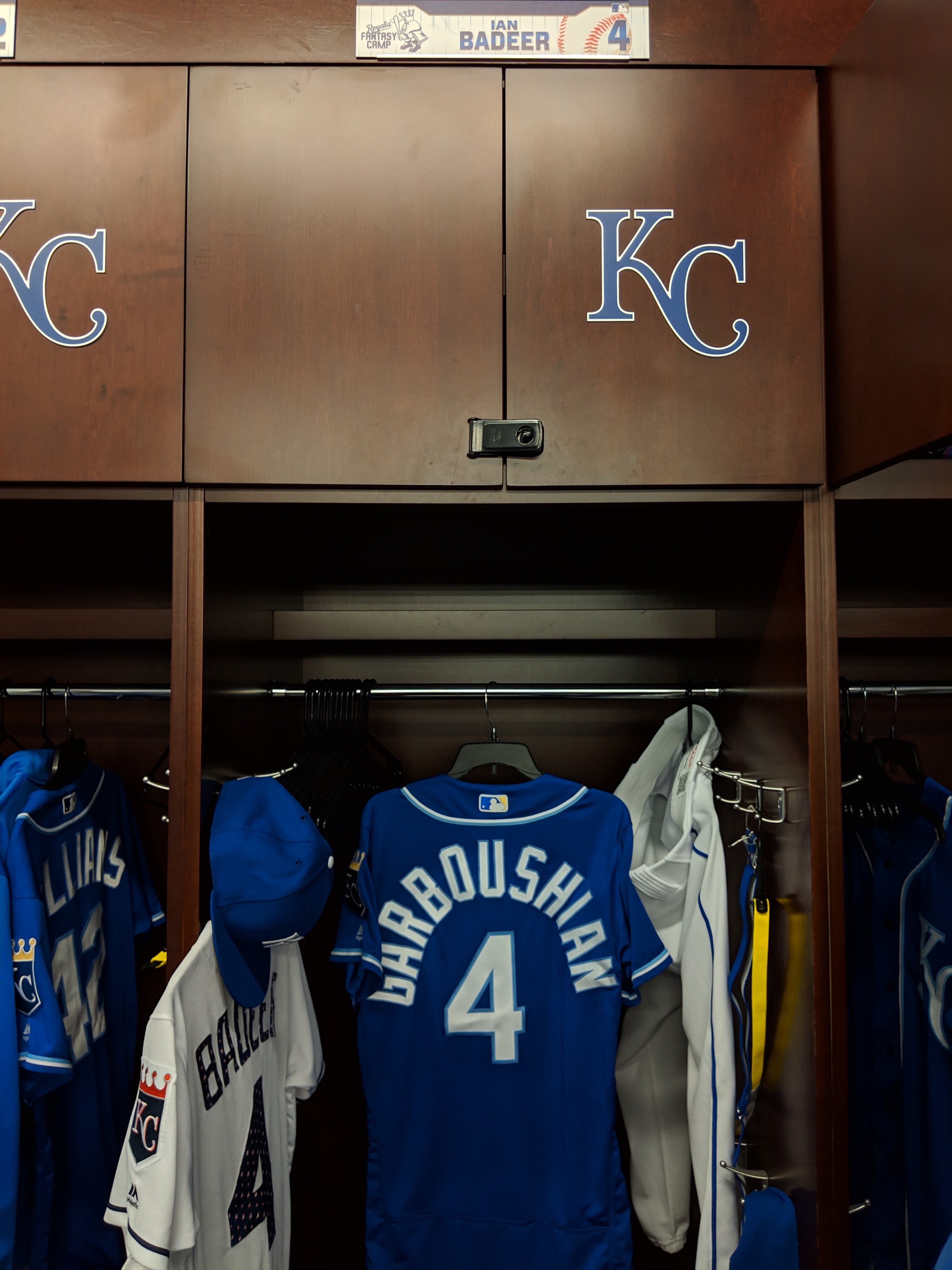 After announcements we did some team photos and then headed off for a quick warm up and skills session. 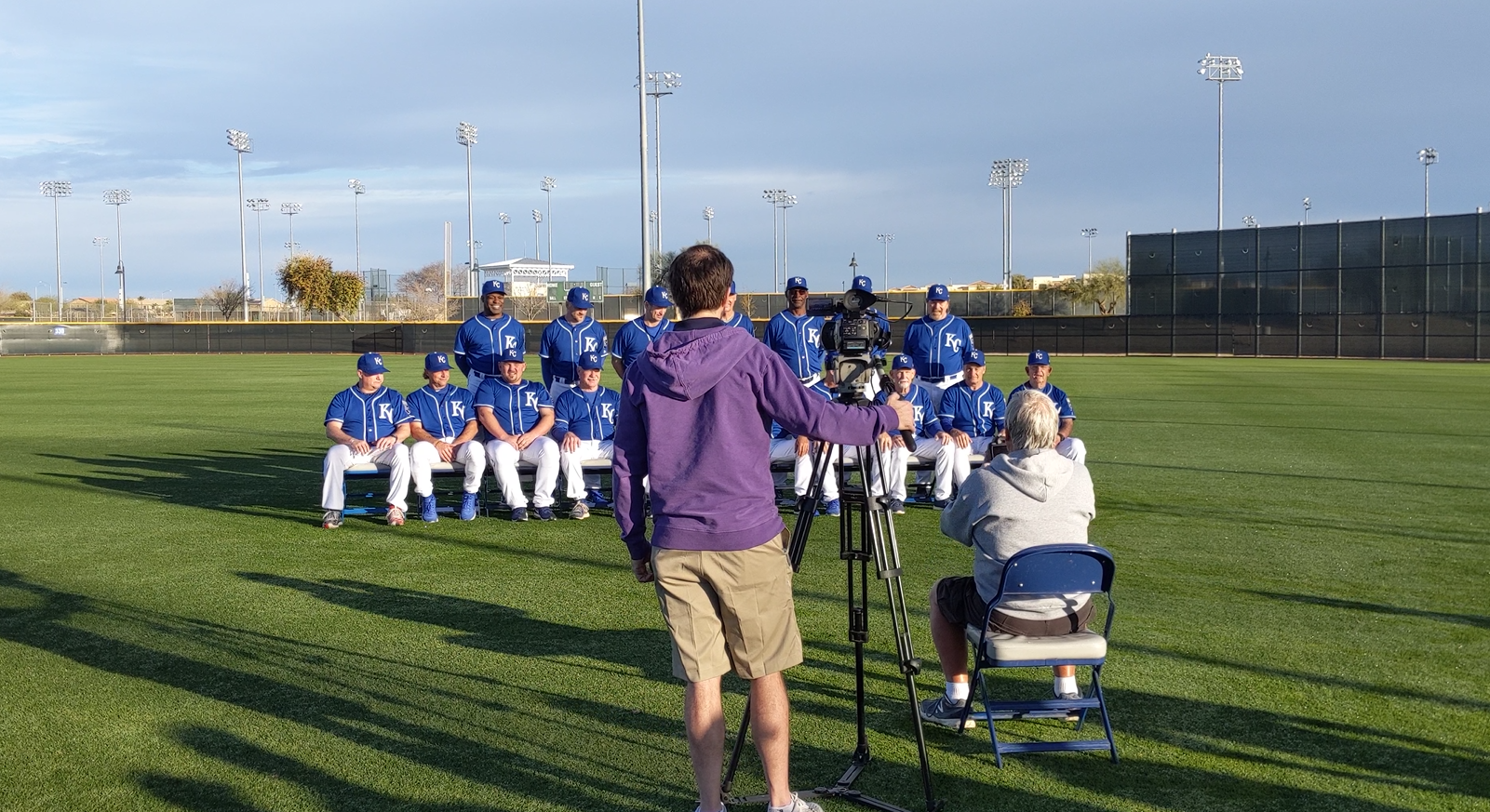 George gave us a quick rundown on hitting, said to imagine the bat like a tube of toothpaste, and then we took some hacks, did a little fielding and pitching and it was time for the first game. 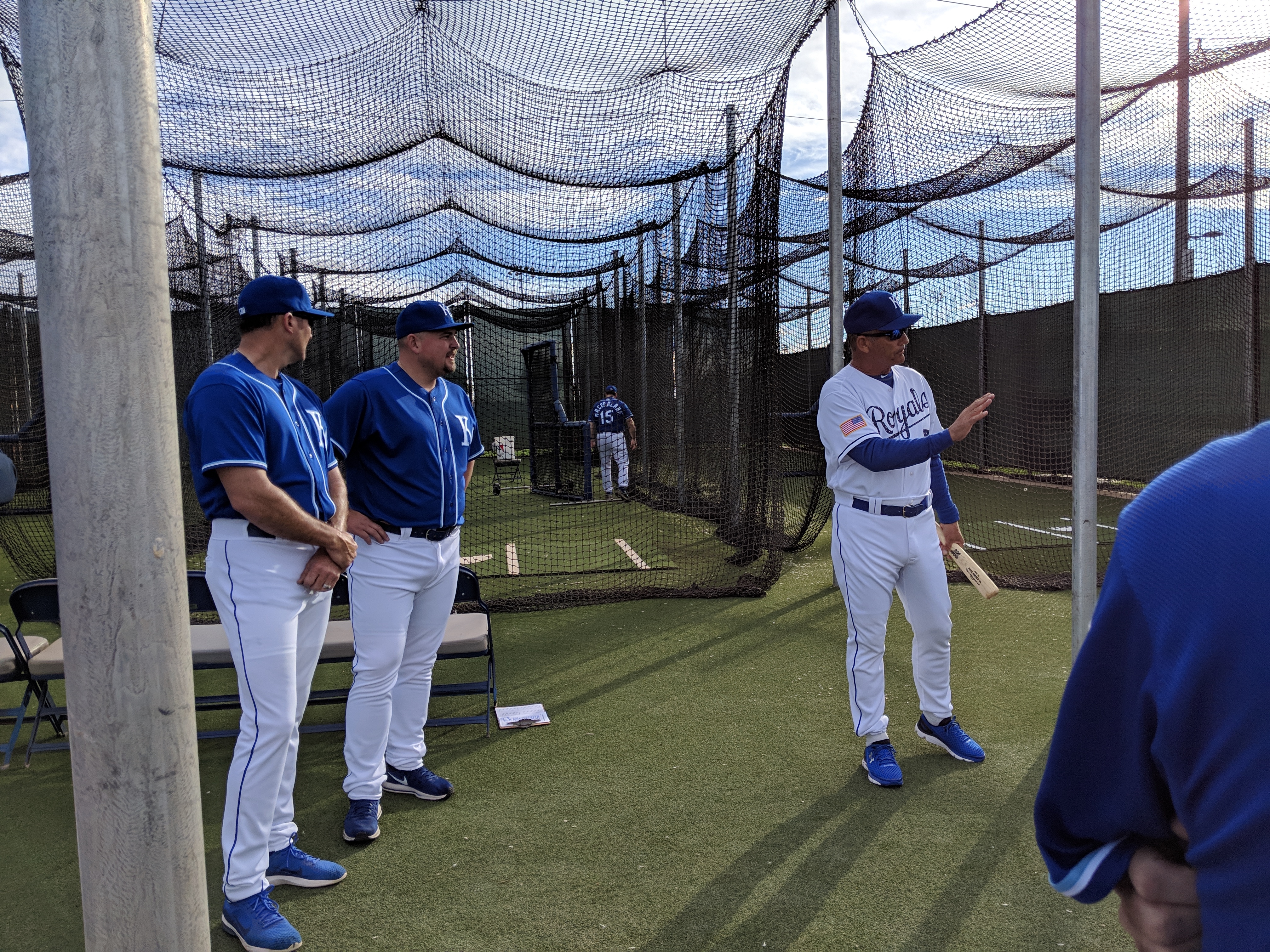 Team Gold (my squad) faced off against George Brett and John Wathan's Blue squad. I was chosen by Leo (Dennis Leonard) to bat leadoff, which I'm sure had more to do with the fact that I was first alphabetically than anything to do with my hitting skills. I strapped on my GoPro and got us started with a single. We ended up scoring six runs (the maximum per inning) in the first. My second at bat I hit a soft liner that was snagged by Rob Riggle, so I have that goin' for me, which is nice. My best play on defense happened at short where I backhanded a deep grounder and performed a very ugly version of a "Derek Jeter" and half jumped to throw it to second. We forced the runner out successfully and the camp photographer got some cool shots of it. Team Gold eventually defeated Team Blue 11-9 and we started off camp 1-0!

You can watch my GoPro clips from Game 1 HERE and HERE. 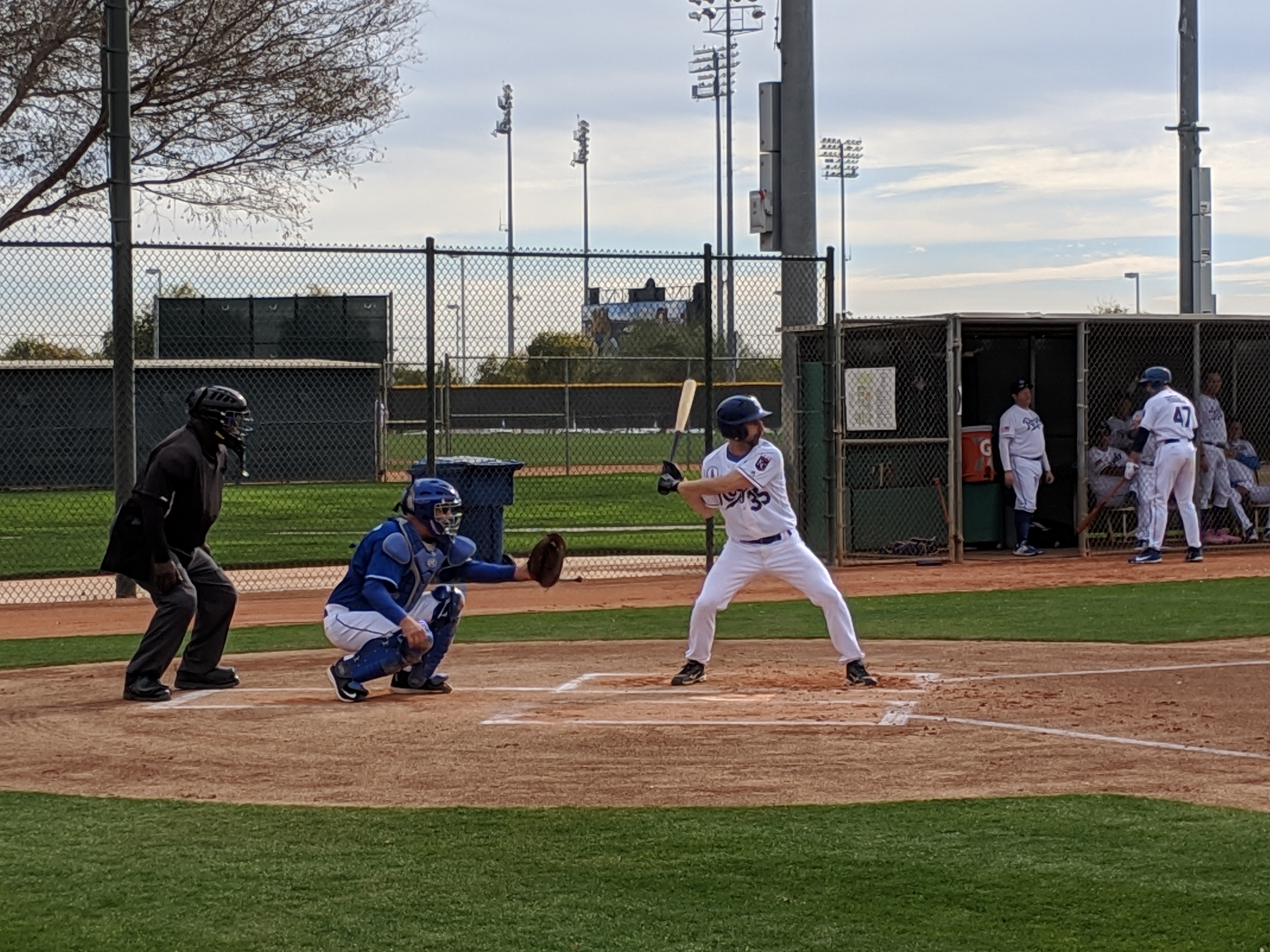 After lunch we launched Game 2 against Jim Eisenreich's Team Green. Our team has very few people who want to pitch, so with our first pitcher done from Game 1, I was tabbed to start this one.

I got off to a good start and struck out two hitters in the first inning, and ended up throwing three innings, allowing four runs, with no official walks (three players hit a four ball count and elected to reset to a 1-1 count) and four strikeouts. I learned how to throw a curveball from youtube two weeks ago, so this was the first game I got to try it out, and it worked surprisingly well!

We traded blows with Team Green and kept the score close heading to the bottom of the final inning up 9-6 with Green coming up to bat. They plated a run quickly and then loaded the bases with one out. The next hitter hit a pop fly into shallow right center field and I ran dead sprint from shortstop to try and make a play. I managed to reach it in time and secure it, and then found that the runner on first was halfway to second. One quick toss back to first base and we won the game with the double play! I felt like a kid again celebrating with the teammates on our victory and finishing the day 2-0.

Acknowledging the toll all of this action and the 16,000ish steps reported on my fitbit, most of us hit up the trainers room for recovery. I hit the cold tub first which was colder than I had even imagined, after two minutes of hell, the last 8 minutes were bearable and a few minutes in the hot tub eased the shock and brought me back to room temp. The excellent training staff also ice-wrapped my shoulder after the pitching effort. 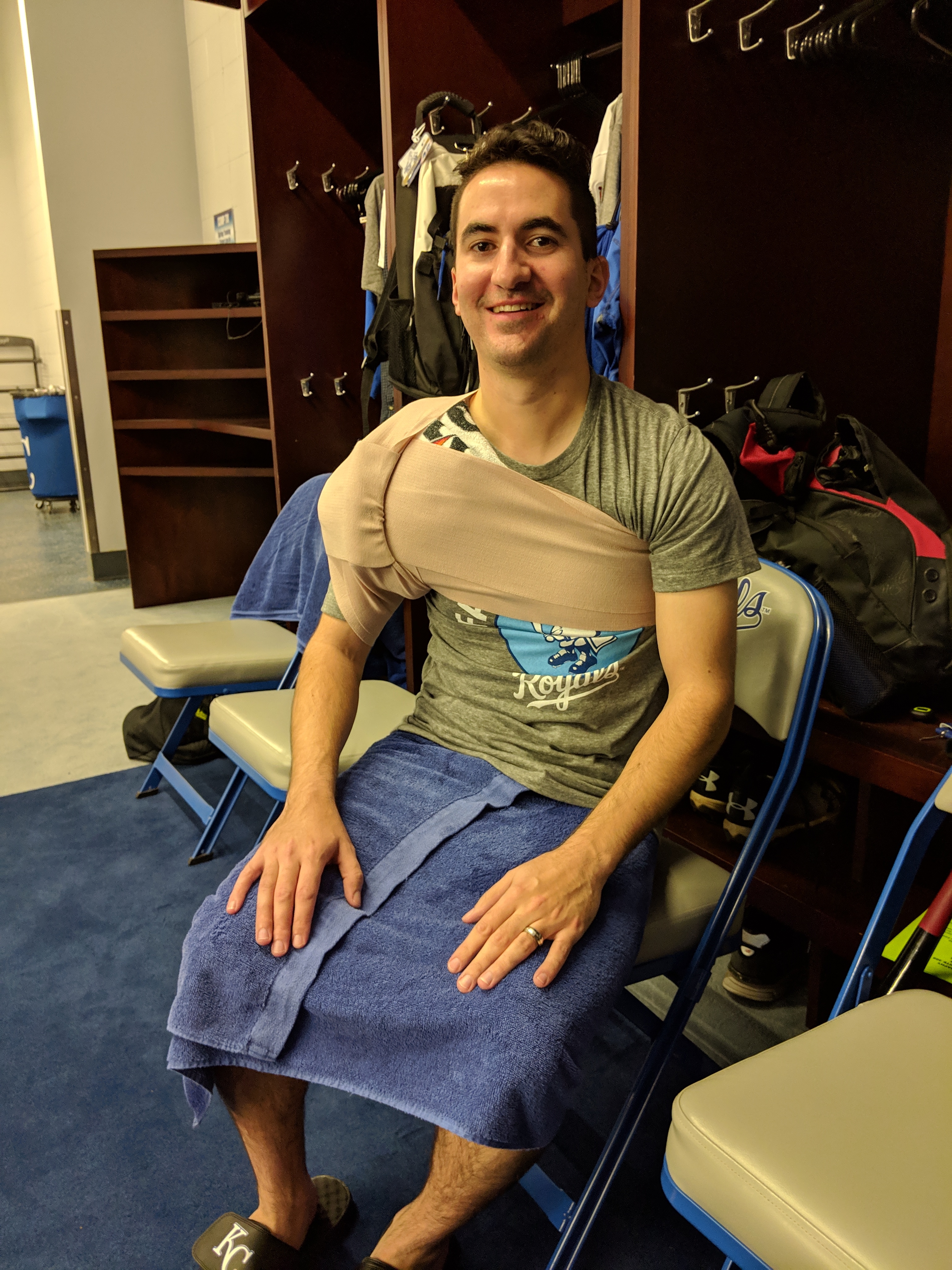 Back at the clubhouse, Willie Wilson and Amos Otis shared stories of their frequent spats with umpires that were hilarious in retrospect. After dinner, we got to hear from umpire Ted Barrett, who has been behind the plate for two perfect games. Rob Riggle did a Q&A with us after that, and he answered questions from movies to SNL to his military background, with most of his stories generating a lot of laughs.

I got called up front with three other campers, and they sang Happy Birthday to us since we all got older right before or during camp. Our gift was a Bo Jackson Broken Bat Bobblehead from Fanfest, pretty sweet!

We rode back in the van with Billy Butler and he shared very honestly about his feelings towards free agency, arbitration, how the game is changing, and the 2012 HR Derby. His interesting note of the 2012 Derby was that Robinson Cano was so upset/rattled by what occurred during the derby, that he wanted to leave and not participate in the All-Star Game the next day. Billy said that he and some others convinced him to stay. On a lighter note, he talked very fondly about his favorite barbecue places, and said he has a strong desire to stay attached to baseball and wants to eventually end up back in KC.

All in all, Day 2 was filled with more fun then I knew how to handle, and I'm not sure if the rest of camp will top the highlights on the field, but it was a hell of a way to kick things off. Until next time!