It took thirty-two years for Steve Balboni's team home run record to be surpassed by Mike Moustakas. It took only two for his record to fall. But this second super-Balboni performance was more than merely incremental. Royals fans who had wished for Balboni's record to be broken should, perhaps, have been a bit more specific with the genie of whom they wished that. Despite Moose's 2017 feat, Royals fans were still subject to embarrassments such as this: 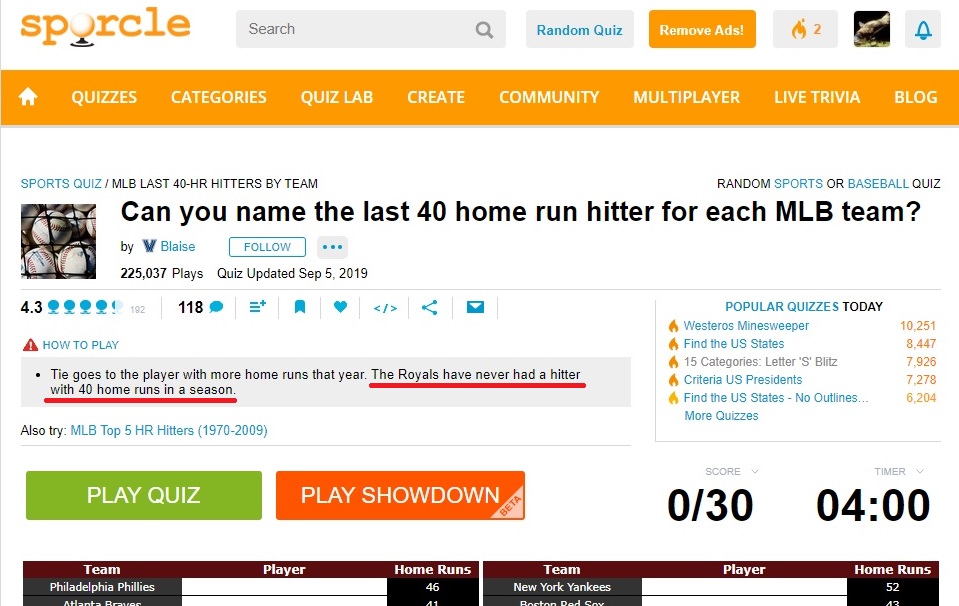 The Royals had won the 2014 A.L. Championship and 2015 World Series on the back of a fantastic bullpen, and the centerpiece of that bullpen was Wade Davis. Acquired from the Tampa Bay Rays in the 2012-2013 off-season together with James Shields, he became the centerpiece of the "three-headed-monster" bullpen which propelled the Royals to the 2014 American League pennant. Taking over the closer's role from Greg Holland when the latter was injured near the end of the following season, he pitched ten scoreless innings in the 2015 post-season, including the final outs of the World Series. He remained the closer in 2016, but suffered some injuries during that season.

So it was with some degree of public-relations risk that the Royals traded Davis following that season for Cubs slugger Jorge Soler. Jorge was a highly-regarded Cuban defector who rose quickly through the minors to play for the Cubs in 2014. He hit a home run in his first major league at-bat and had 14 extra-base hits and 6 walks in 97 plate appearances, good for a .903 OPS. An ankle injury caused him to miss much of the 2015 season, but he made a splash in the postseason, reaching base a record-setting 9 times in a row, including two home runs. He squeezed his way into only 86 games with the talent-loaded Cubs in their World Championship 2016 season. The reaction to the trade could be described as mixed, at best. Poor plate discipline in 2017 and an injury-shortened season in 2018 did nothing to make Royals fans feel the exchange was worthwhile.

However, the potential for great feats of power was clearly evident even then. When he was demoted to Omaha in 2017, he hit 24 home runs in 74 games, and in 2018 he hit 9 plus 18 doubles in 61. So when he started the 2019 season with 9 home runs in the team's first 37 games, matching the team-record pace of Mike Moustakas, the chase was on. In what was otherwise a downer of a season, Royals fans watched excitedly as Jorge Soler became the fastest Royal to reach 20 home runs in a season (game 73), but at the 25-homer mark was merely neck-and-neck with Moose, and well behind his pace in reaching 30.

After breaking the 30 barrier, Soler had a monster week, hitting 4 home runs and being named American League Player of the Week. The last of those woke up Fox Sports KC to the fact that Jorge was approaching Mike Moustakas's record and they started putting this on the screen after each home run of his: By the Royals' 120th game, he had once again caught Moose's pace, tying him as the fastest Royal to reach 35.

It looked like the Royals were finally in position for a major breakthrough...but it looked like that in 2017 as well. Moose, though breaking Steve Balboni's infamous record, got hit by the injury bug and limped over the finish line. Jorge Soler's injury history was not encouraging...would this really finally be the year that gets the home run monkey off of the Royals' back?

One only need to look at the frequency of home runs after # 35 to see that Jorge Soler's season was going to be everything Mike Moustakas's wasn't:

Unlike the injured and obviously slowing Moose, Soler was continuing and even accelerating his home run pace, until finally, on September 3, he surpassed Moustakas:

But 39 was not going to satisfy power-starved Royals fans any more than 38 did.

What is it about numbers divisible by 10, or powers of 10? Somehow (barring scandals like steroids or gambling), decimal milestones like 500 home runs, 3000 hits, 300 wins or 3000 strikeouts make a player an automatic Hall of Famer, while those who are close but just under those numbers find their fitness for that honor more questionable. While the obvious answer is that it relates to the number of fingers that most people (though not all) have, it is really an arbitrary way to set a marker of athletic achievement. Be that as it may, the perception of significance of "big, round" numbers exist, and one other manifestation of that is the number 40, representing an amount of home runs which no Kansas City Royal (or, for that matter, any Kansas City Athletic either) has ever hit in a single season. Just how pathetic is it that the Royals have never had a 40 home run season in their first 50 years? There have been 339 40-homer seasons in baseball history, 238 of them since the Royals were created in 1969.

Needless to say, this, more than a mere incremental notching up of the current record, was a barrier that Royals fans had longed to see broken. And just one night after one-upping Moose's team record, Jorge delivered on that wish:

Out of the Cellar with Soler

As nice as it was to finally get past the big round number, how truly meaningful could that be if the Royals home run leader still had the fewest home runs of that of any other team? The new number would look respectable (it has a 4 instead of a 3 at the beginning!), but it would still be one that all other teams could feel superior to.

One year prior, a mere two home runs past the 40 mark would have brought the Royals' record out of last place above the New York Mets, whose record has been 41. But Jorge Soler's big power year came at the same time as the Mets brought up a rookie named Pete Alonso, who not only broke the Mets' own team record, but proceeded to break the overall home run record for a rookie. By the time Soler had hit his 42nd home run of 2019 on September 11, the Mets' new record was at 47 and climbing. The next number to reach for was 46, the team record held by the Nationals and the Rays. Could Jorge reach it with just 16 games to go in the Royals' season? It did help inspire confidence that he hit # 43 that same night. Home run # 44 came the very next night, and # 45 only four games later. But then the power dried up. For nine agonizing games, Royals fans watched Jorge go homerless, a stretch he equaled only once before during the season. Could he have come so close only to fall just short?

Less noted but also true of the historically powerless Royals is that, unsurprisingly, no Royal has ever led the league in home runs, a dubious distinction the Royals have shared with the Houston Astros. As Jorge Soler's home-run numbers began to mount, he moved up the leader boards for the American League home run title:

While there were rivals nipping at his heels for second place in the home run race, it certainly looked like Jorge could rank higher than any Royal ever had, but it was clear that Mike Trout was the front-runner entering the season's final month. But as it turned out, Trout had been playing for weeks with pain in his foot from a condition called Morton's neuroma and could no longer bear the pain. He sat out of games starting on September 7 and formally ended his season with foot surgery a week later, still leading the league with 45 home runs. But with him out of the running, there was the genuine possibility of overtaking his home run total for the year. Within two weeks, the Royals' slugger tied Trout and would be the first Royal to even share the title, if no one else overtook them both. But then he stalled...would a Royal win the title outright? Or would it be no more than shared?

Conclusion/Convergence: Two Birds with one Stone

The suspense lasted until the second-to-last game of the season, when Jorge Soler both overtook Mike Trout with his 46th home run and, on the same day, first tied...

...the Rays and Nats team record. The Royals are no longer the power doormat of the major leagues, and one additional home run the following day put the Royals' new record ahead of that of the Angels (sorry, Mike Trout) and Astros to boot. A decades-long shame was buried at long last.

My thanks to Craig Brown, who helped me with the video elements of this article