By now the toll of back-to-back doubleheaders is really setting in and the trainer's room is the busiest room in the clubhouse. Ice wraps, cold tubs, hot tubs, tape, bandages, rollers, and painkillers are all being utilized to their fullest extent. I may the youngest camper here, but I am using every trick in the book they have to stay on the field, while catching plenty of flack from the rest of the campers for needing any recovery at all. My quads are stiff, I've got a toe that has changed colors, and my right arm is now just an arm-in-name-only.

We started again with team awards for the previous games. I took more photos this time around of the coaches handing them out. Brett was so thrilled with his team's performance, that as soon as they asked him to announce his MVPs, he got up and just left (for laughs).

You can watch George hand out his awards here. 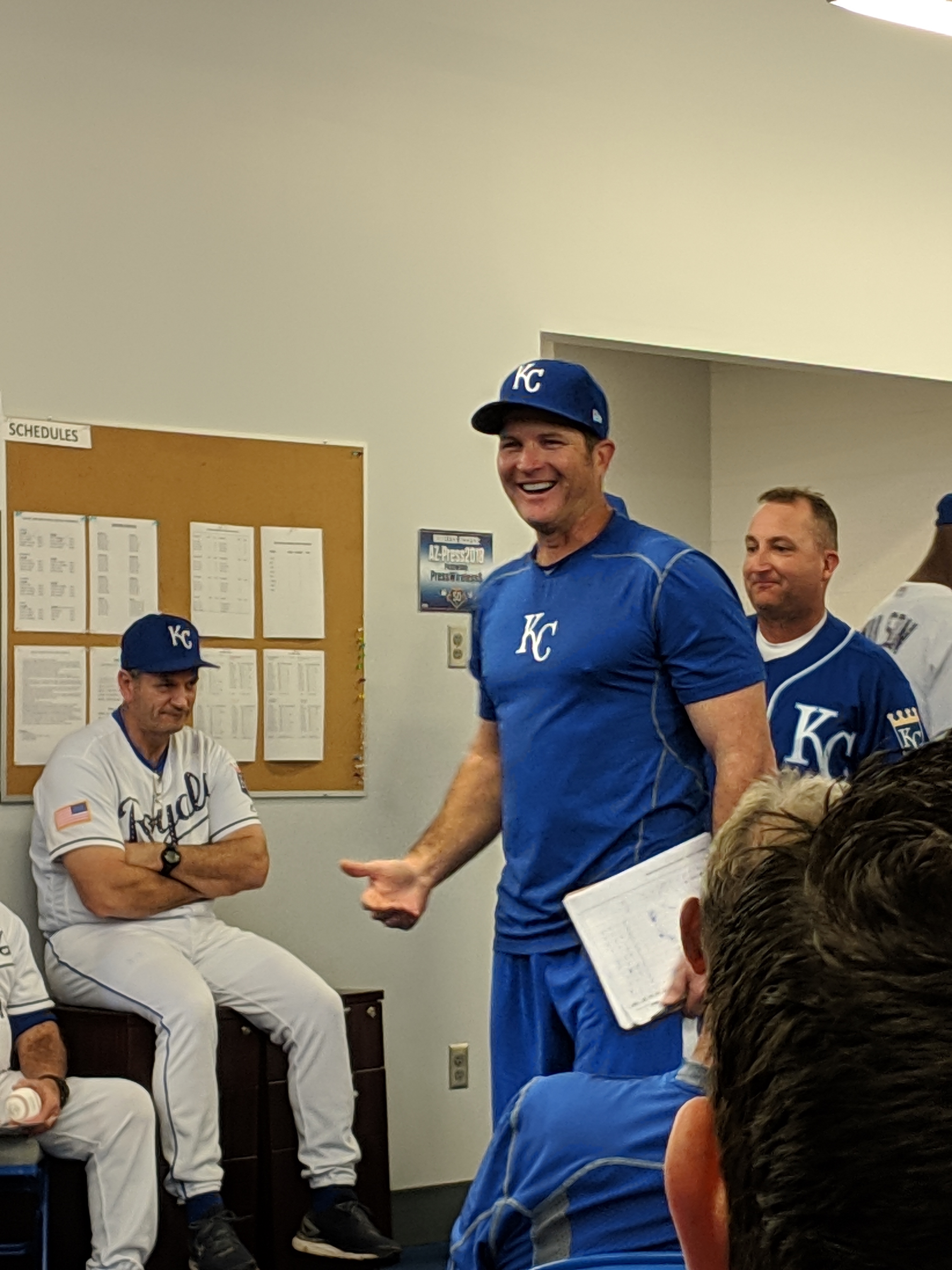 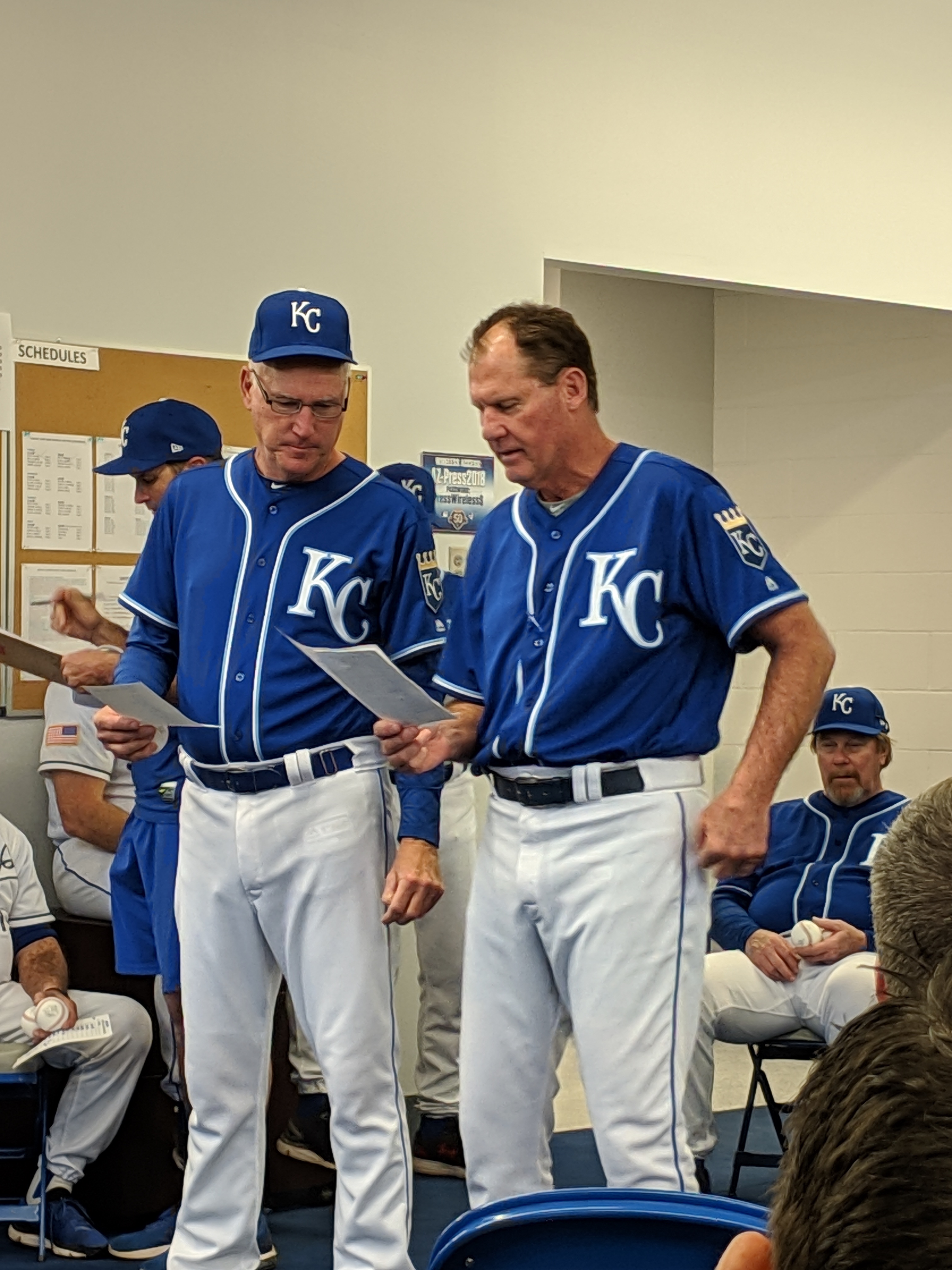 Above: Charlie Leibrandt and Jamie Quirk 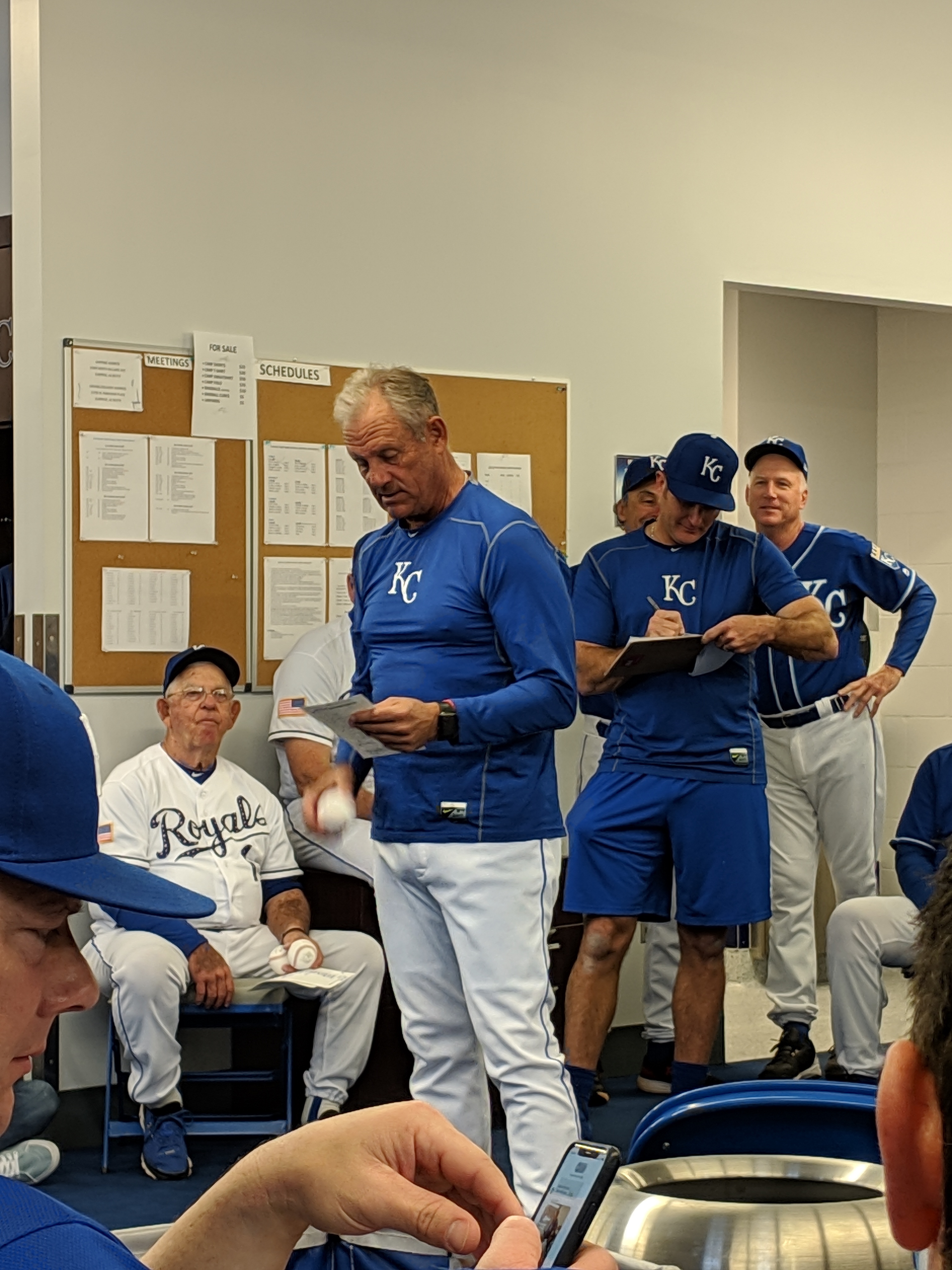 Above: You should know who the heck that is 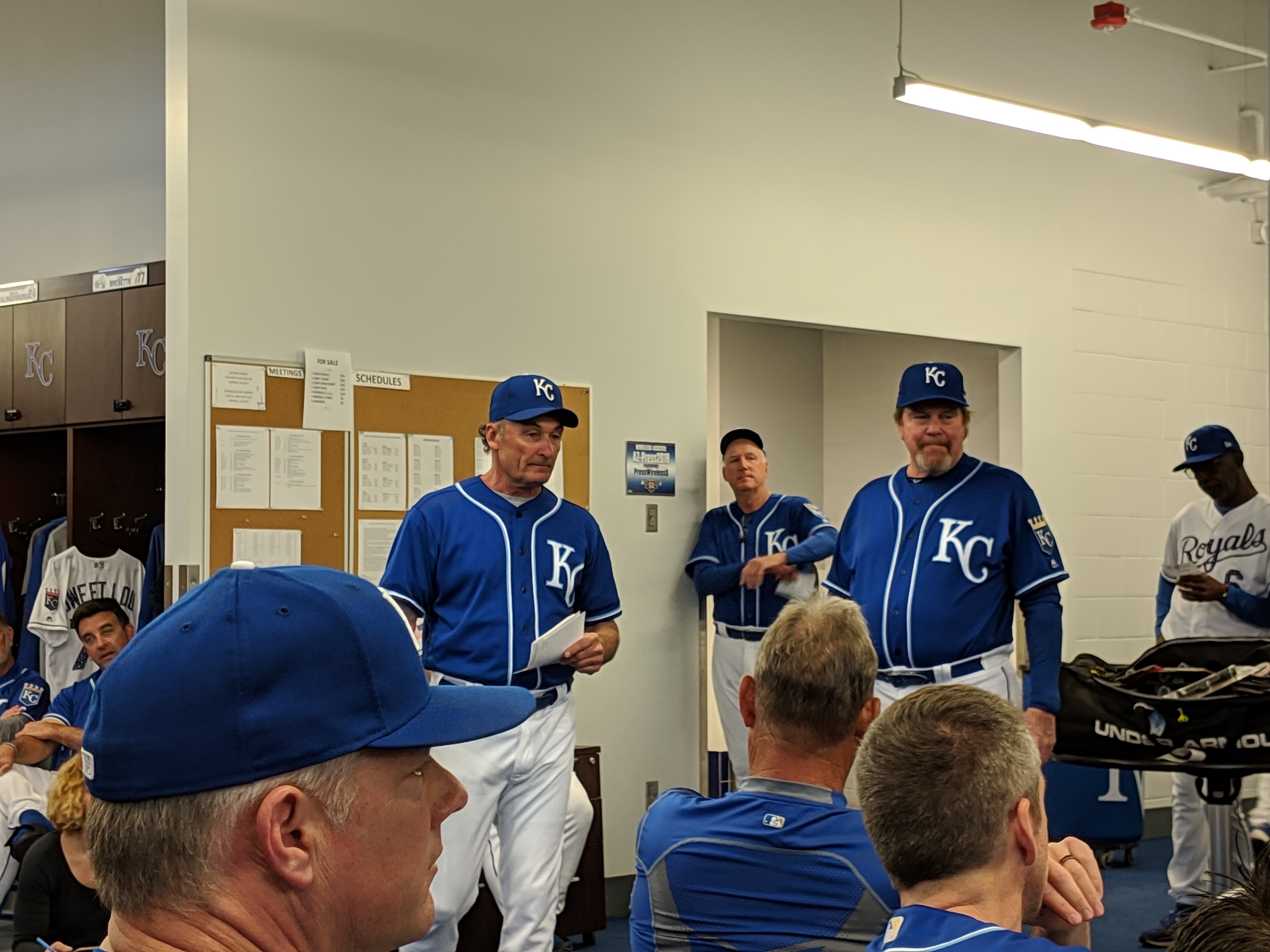 Above: Jim Eisenreich and Al Fitzmorris

Kangaroo Court continued and one player in particular got fined about a dozen times, and has quickly become the whipping boy to blame for any violation that happened.

Our games got underway and with our team out of pitchers, I volunteered to start the first game and see how my arm felt. I took it easy the first inning and only threw two slow pitch types, giving up a few runs. The second inning I did my full delivery and really started using my changeup, generating a lot of swings and misses. Unfortunately, I had no other pitch that worked, and got shelled, giving up nine runs in two innings! Leo quickly noticed that my arm was falling off and mercifully pulled me. To add insult to injury, Charlie Leibrandt came in to soft toss to his own team, and shut his own guys out for two innings, and he was TRYING to get them to hit it! We were down 12-0 at one point, and finally scored some runs at the end to cut the lead to 4 before falling 15-8.

Before the second game, one of my teammates got in a pickle, his jersey was still in the wash and and his alternate jersey had just been autographed by players. I lent him my alternate jersey and got to see what my original family name looked like out there, that was a special moment. 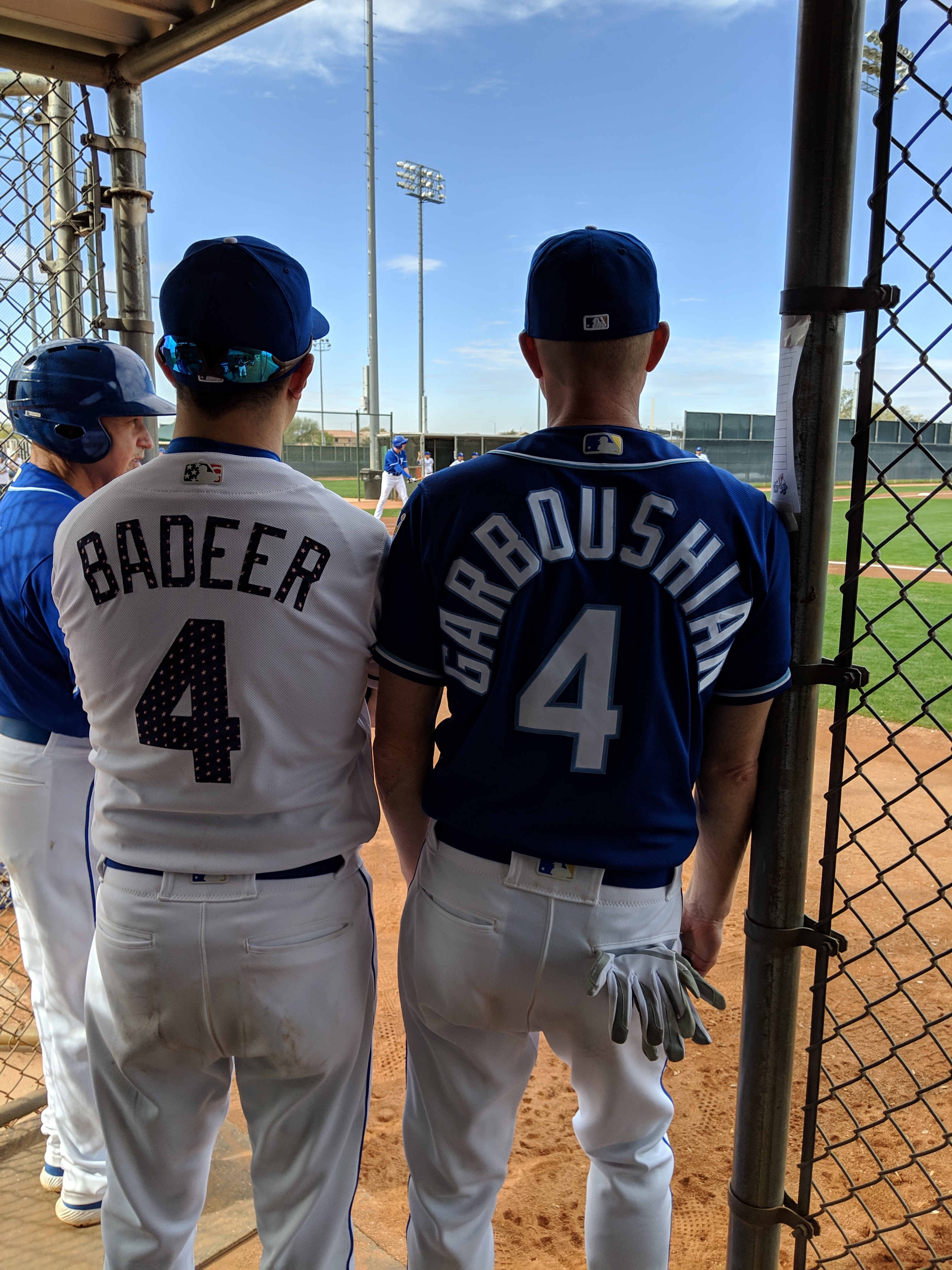 Game 6 started better for us with a close game early on, I battled back from an 0-2 count to decline a walk, and then ripped the ninth pitch into center for my first extra base hit of camp, an RBI double. We went on to score six runs in the inning and enjoyed a lead for a while, but never scored again, falling 7-6. 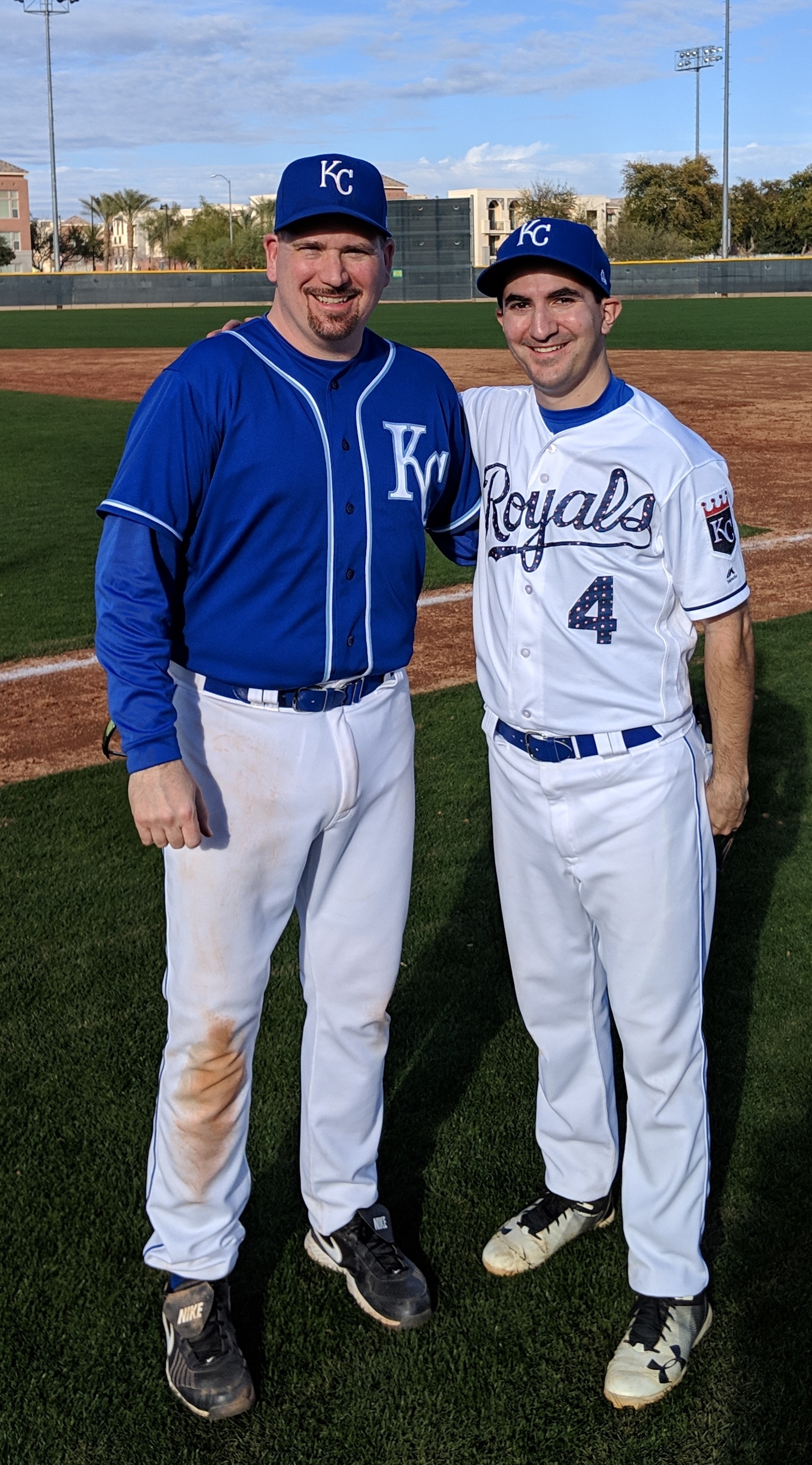 Despite the game results, we've had a great time playing and hanging out and enjoyed more great stories from the players, like the one below.

Willie Wilson is always sharing stories, and this gem came from his time with the Athletics. He was recounting how they weren't the biggest fans of Jose Canseco while Jose was finding ways (along with Rickey Henderson) to project their superstar importance by coming up with excuses to get out of playing. "Coach, my head hurts, I can't play." "Coach, I'm not feeling well today." "Coach, I've got a migraine."

The A's coach told Jose he was going to give him some time off to get his head right, knowing full well what was going on, and gave him this ultimatum.

"If you come back and tell me you got a migraine, I'm getting rid of you."

Jose thought he was joking.

Nearing the trade deadline, the A's have a game at 1pm, and Jose shows up ceremoniously late at noon. "Sorry, coach, I got a migraine." That was it.

Not much later, Jose was in the on deck circle of a game with a few minutes to go for the trade deadline and the dugout phone rings...

He had been traded to the Rangers and they had Lance Blankenship run out and bat for him. Jose packed up all his stuff and headed back to the clubhouse, Willie reported that he and another player followed him back to see how he was handing the news. Well? He was locking all the outside doors so the media couldn't enter.

Jose: "I don't understand, I got traded to the Rangers."

Most of Willie's stories end up with him laughing so hard he falls over in his chair, and this was that moment.