I used the batting dataframe within the Lahman package to compare the different eras. To determine the extent of the correlation between eras and batting statistics, I separated the data within batting into seven different groups, labeling them the respective names of each era. Using the dplyr package within R, I placed a color on each piece of data, and then used the package ggplot2 to plot this data across multiple graphs. Looking at each graph, I was able to determine if historical eras correlated to batting statistics. 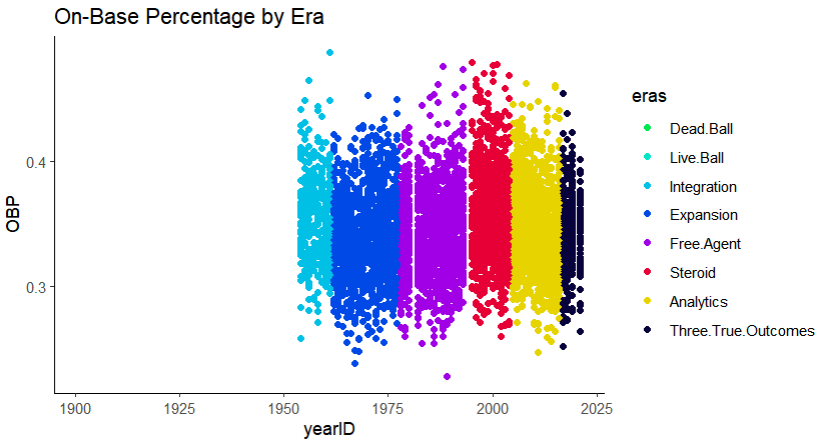 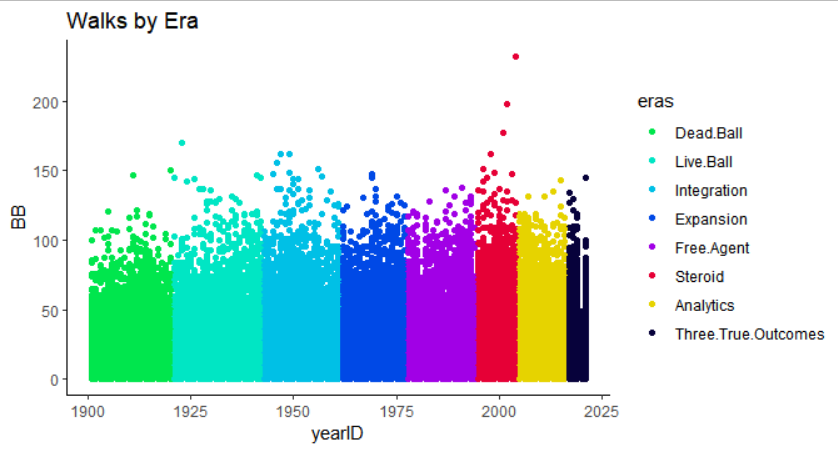 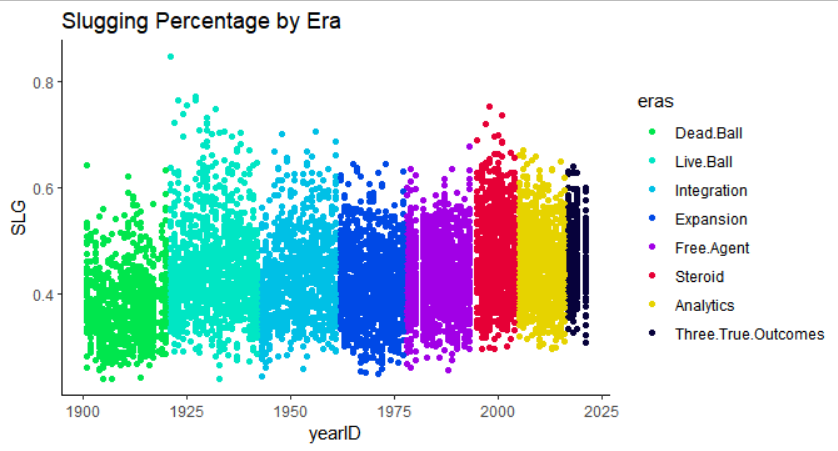 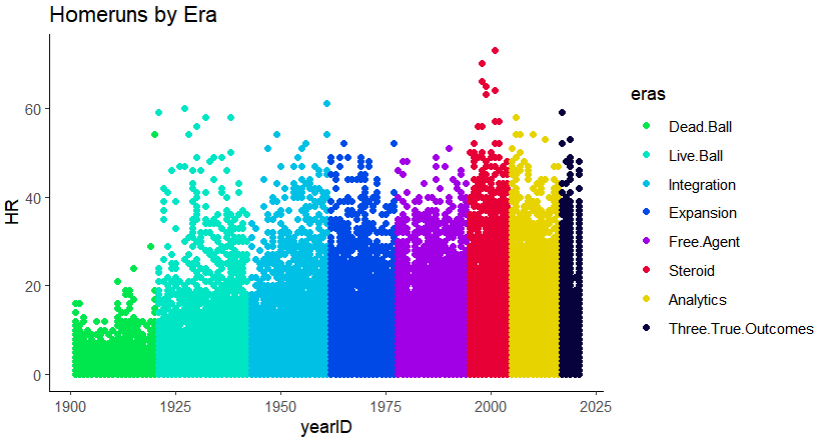 Figure 1, surprisingly shows very little change in OBP across the eras. This is surprising, as in recent years, hitters with high OBPs have become highly valued and teams have fundamentally changed to value OBP more than batting average. This lack of change in OBP can be explained by pitching performances. Although the MLB has focused on playing and obtaining players with high OBPs, pitchers have greatly improved, as the average velocity of an MLB pitcher is steadily going up. Had hitters continued to compete against the same level of pitchers across the eras, OBP most likely would have risen; however, as hitters and game strategies began to get better, so did pitchers, resulting in a similar OBP across the eight different eras.

Figure two shows very little change in walks per player over time. This can also be attributed to pitching performance. Although teams have begun to prioritize the walk, pitchers have become much better, resulting in a constant amount of walks across the seasons.

Figure 3 shows very little change in slugging percentage across the history of the MLB. Similarly to OBP, this can be attributed to pitching performance.

It seems that over the years significant stats such as slugging and OBP, and as a result OPS, have remained constant over time while counting statistics like home runs have differed. This information has large implications on the game of baseball. This data is available to front offices and more than likely they are using it to build their rosters. Front offices will continue to buy high achieving individuals in hopes of raising their team to above league average in these select statistics, usually resulting in more wins. The problem with this is small market teams do not have the luxury of buying these types of players, as the Mike Trouts of baseball are extremely hard to come by for a cheap team. Unable to afford these types of players typically means small market teams must be okay with league average to even below average production at the plate. One possible solution to this problem is chance, which the Kansas City Royals exploited in 2015. By chance, I mean taking advantage of immeasurable variables. No amount of data could have predicted Jose Bautista dropping the fly ball in the ALCS, just as amount of data would have predicted Carlos Correa making an error in the ALDS: the 2015 Royals succeeded on the backs of creating chaos. If a team could find a way to measure the value of human error and inconsistency, an MLB team would have an easy path to success. The question is, how do we go about exploiting the human side of baseball?