Share All sharing options for: Royals outlast Angels in extra frames for 7-4 victory

The bright lights were on the Royals for a quasi-national television audience. How would they respond? By telling America to get aboard the singles train - WOO-WOO! The Royals collected 16 hits over 13 innings, 14 of those hits being singles. They were able to scratch and claw their way to four runs in regulation time, before bursting things open in the top of the thirteenth with three runs to win it.

The Royals got the scoring going in the third when Nori Aoki and Eric Hosmer would single and score thanks to Lorenzo Cain and a pair of Angels outfield errors. The Royals would add to that in the fourth in the grittiest way possible, with a bunt single by Alcides Escobar, steals of second and third, and an RBI single by Eric Hosmer. Manufacturing jobs may be leaving America, but manufacturing runs is still done in the U-S-A. 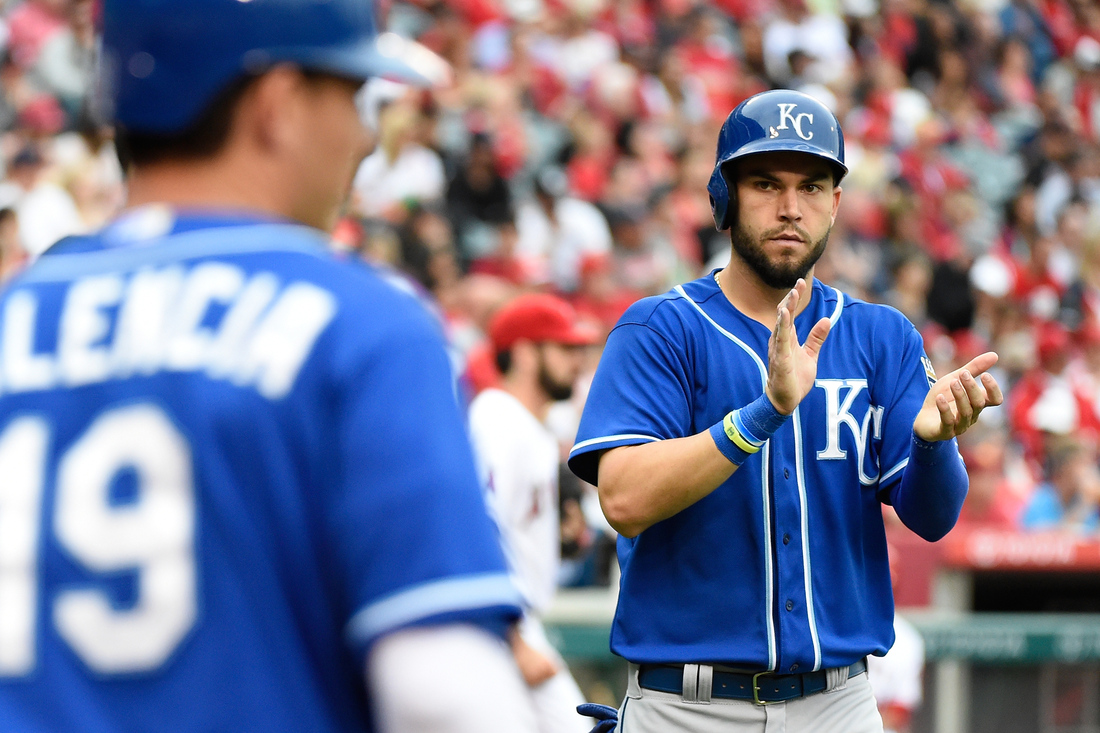 Erick Aybar would put the Angels on the board with a two-run home run in the bottom of the fourth. The fifth was the nutty inning. Mike Trout led off with a second homer in as many nights to tie the game at 3-3. Albert Pujols then looked like he might go back-to-back, but Alex Gordon made a sensational catch. Or so it seemed. The play was challenged, and although the replays looked pretty inconclusive at best, a lonely man in a box watching video in New York who has halitosis, struggles with the Tuesday edition of the New York Times crossword puzzle, and has never been in love, ruled that the ball touched the wall and it was therefore a hit. See what you think.

The umpires then awarded Albert Pujols second base because in an alternate universe where Albert Pujols is very fast and Alex Gordon is a terrible outfielder, Pujols would have reached second base on that play. Fun times. Of course the Royals would cause those shenanigans to shoot them in the foot. Pujols would advance to third on a ground out, then score when a James Shields pitch went through the wickets, past a lackadasical Salvador Perez. 4-3 Angels. The Royals would tie it in the seventh when they made it rain with singles, scoring a run on a Perez double play groundout. Then - free baseball.

It was not a single, but a double that got the scoring finally going in the 13th. Danny Valencia led the inning off with a double off Angels reliever and Kansas City native Michael Morin. Jarrod Dyson came in to pinch run, and when Alcides Escobar sacrified him to third on a bunt, Morin would throw it away, allowing Dyson to score.

After another sacrifice by Pedro Ciriaco, an RBI single by Nori Aoki would plate another run, and an Eric Hosmer single would lead to a Billy Butler RBI sacrifice fly. Greg Holland had an easy inning for his 14th save.

James Shields was not at his sharpest, the Royals had a few boners on defense, the team had some calls go against them, and the offense didn't scare anyone. And yet, they come away with a win. It is nice to see this team battle back and do what it takes to win. If the Giants hold on to beat the Twins, the Royals will be tied for second place. Hop on the singles train, its leaving for Mediocreville.